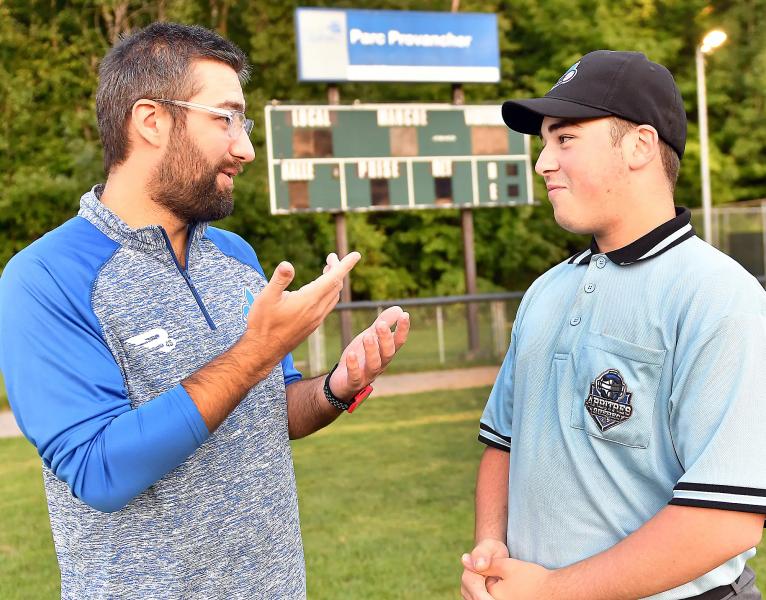 The shortage of referees on the courts of the province is worse than ever and a young official from Quebec denounces loud and clear the insults and disgraceful comments shouted at his colleagues who encourage them more and more to desert land.

“You are the worst referee in the whole league! This sentence shouted from the stands earlier this summer by a mother and spouse of a coach was the straw that broke the camel's back for referee Jean-Nicolas Leroux.

The 16-year-old young man, who officiates for the Noroît Baseball Association in Quebec City, questioned himself after this 15U B level game. After four years in the business, this other unsightly salvo almost got the better of him. his passion.

In football, as in the majority of sports, the shortage of officials is glaring.

“I was getting tired. I umpire baseball because I like it. Worse, to be yelled at all the time, you wonder if you're good at refereeing, if you're in your place. […] At some point, you are not sure if you are correct. It's starting to get into your head, ”lists Jean-Nicolas, who had already received other not very complimentary comments from this same coach.

The chief referee of the Quebec region, Mathieu Marcoux had to intervene to ensure that he kept the services of his official. From now on, Jean-Nicolas no longer goes to matches where one of the two teams of the coach in question is involved.

Insults to the chain

“Rotten!” », « you are not good », « you are blind »… The list is long when the student enumerates what he was able to endure. And he's far from the only one.

This summer, in the Quebec City region alone, 15 officials chose to leave, disgusted with serving as a lightning rod for parents, children and coaches dissatisfied with a decision, says Mathieu Marcoux. “I lose 40% of level 1 referees every year.”

And the situation is no different elsewhere in the province. The phenomenon affects school sports, hockey, soccer and football (see boxes).

It is for this reason that Sylvain Saindon, Technical Director at Baseball Quebec, published an open letter to all parents of the Federation at the end of August. Hostility on baseball diamonds and in the stands is doing the sport a lot of damage, he says.

In 2021, Mr. Marcoux came out on social media after a coach threatened a 16-year-old referee with “stretching her out”.

The two officials of this match no longer referee at all. “We see that there is a crisis. Parents don't even feel like their kids [umpires] are safe on a ball field in a 9U or 11U game. This is where it gets a little scary,” he says.

Jean-Nicolas hopes his testimony will change mentalities. With a calm tone and clear ideas, he paces his few notes prepared before the interview to get the message across.

He has seen several of his colleagues leave the profession and knows that there is a cruel lack of succession.

To stop the bleeding, Jean-Nicolas suggests to those tempted by a lyrical flight worthy of the major leagues to put themselves in the shoes of the official's parent. “I wish they thought it could be their son,” he said candidly.

Between 2019 and 2022, Baseball Quebec lost nearly 900 of these 2,109 referees. During this time, the number of members jumped by almost 6%. “It's even more catastrophic for us. For more than 10 consecutive years, we have had an increase of 7 to
10% in our membership. And the referees, it goes the other way. I announce to you that a wall will stand in front of us, ”says Sylvain Saindon, technical director at Baseball Quebec and high-level coach for 35 years.

These figures notably prompted him to publish an “Open Letter to Parents” at the end of August, during the playoffs. Mr Saindon laments the “chronic intimidation” faced by referees and notes that it is a major factor in the retention of officials. Many leave within the first three years.

“Referees in 1st, 2nd and 3rd year try to build their confidence. If you have to yell at them all the time, they don't come back,” he says.

Problematic since the pandemic

The Quebec Student Sport Network (RSEQ) “does not expect to have an easy season” regarding referees, but is delighted to see the Department of Recreation, Sport and Physical Activity (DSLAP) begin work to to help sports federations find possible solutions to the growing problem.

RSEQ CEO Gustave Roel estimates the loss of officials for all sports federations at 25%. “The problem has really grown since the pandemic. For those who were already considering quitting refereeing, it hastened the quitting process. And the federations were not able to promote since there was no sport in the schools,” he explains.

Mr. Roel warns that it “could happen” that matches are played without a referee but that this is not the first alternative considered. He notes that the insults thrown at the referees “do not help” to thwart the shortage.

A solution for hockey

“The solution [to the shortage of officials] goes through coaching,” says Marc Maisonneuve, officials coordinator at Hockey Quebec for seven years. “The key to our success at the senior level has always been our supervision program. If young people are left to their own devices on the ice, they are more likely to make mistakes, which leads to frustration. With frustration can come outbursts. But to get there, Mr. Maisonneuve remains aware that it is necessary to succeed in keeping the referees, whose number has dropped from 4,599 in 2019-2020 to only 2,770 in 2020-2021. The uncertainty linked to the hockey season due to the pandemic and the insults hurled at the zebra men explain this shortage.

“It really is a situation that is alarming at the moment. Hugo Dallaire, responsible for assigning referees to school football in the Quebec City region, does not mince words when he discusses the lack of referees on football fields. The Provincial Association of Football Referees of Quebec has 335 officials at the moment, according to Mr. Dallaire. A much lower number than that of “the big years”, during which 500 officials filled its ranks.

He gives the example of a match at the Saint-Jean-Eudes school, played on the 10 last September. “Saturday, it would take me between 9 and 12 officials to cover Saint-Jean-Eudes. There are going to be three,” he blurts out.

Although referees can sometimes be the target of comments from spectators, this is not a chronic problem in football, says Mr. Dallaire. »

« We have been spared from this in the region. 95% of our officials are adults. It's harder to yell at them than a 13-year-old child. And when we leave the field, we are several referees together unlike baseball where the referee can be alone. »

*Figures for 2020 are missing due to the pandemic