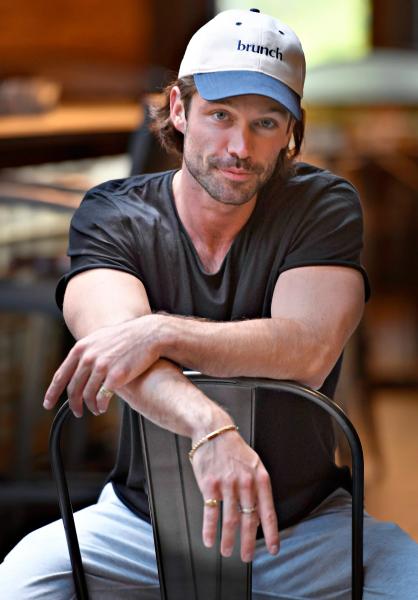 Joey Scarpellino didn't necessarily benefit from the so-called ideal circumstances for his first theatrical role, joining the cast of Ladies Night, for you ladies only five weeks before the first performance. But true to himself, the actor chose to go for it, head down. “I've never been one to pressure myself,” he says.

End of June. The actor Mathieu Baron – whose arrival in the troupe of Ladies Nights, for you ladies – had been announced with great fanfare – is withdrawing. Joey Scarpellino's phone then rings: he is called in for reinforcement just over a month before the first performance.

The actor does not hide it: he hesitated, giving himself “time for a weekend” to think about this proposal. “My meeting with Denis Bouchard [the director, Ed] weighed a lot in the balance. I really wanted to work with him. I knew I had a lot to learn from this man,” says Joey Scarpellino on the phone.

“In life, I like to try new things. So I saw it as a great learning opportunity. I may have been naive, but I didn't see the five weeks of preparation as an obstacle. It didn't stress me out at all; for me, it gave me plenty of time to learn my scenes and the choreographies”, he explains.

And that's what he did. His first appearance on stage was thus made without the slightest incident – ​​on the contrary – the public warmly welcomed his work alongside Denis Bouchard, Patrick Emmanuel Abellard, Sébastien Leblanc, Guillaume Rodrigue and Julie Ringuette.

Undeniable success of the entertainment industry in Quebec, Ladies Night, for you ladieshas been rolling its bump across the province for two decades now. But the production has been completely revised. The choreographies are now signed Jean-Marc Généreux and the text has been revised and tightened to be presented without an intermission.

The plot remains the same and therefore always transports the spectators to a mining town where a group of friends seeking to fill their free time set themselves a challenge: to put on a show of stripteasein order to entertain the fairer sex, but also to prove to themselves that they are still capable of it.

“We have something really strong in our hands. The atmosphere resembles that of a rock show; people laugh, shout, clap their hands… There is really a party spirit that is taking hold in the room. And after two and a half years of pandemic, it feels good to be in a gang and laugh, to take your mind off things,” remarks Joey Scarpellino.

A first film in English

On the sidelines of Ladies Nights, for you ladies, expected across Quebec over the next year, we will soon be able to see Joey Scarpellino on the small screen in Stay the Night, his first English-language film, expected on Crave in November.

Shot in Toronto during the pandemic, this romantic comedy will follow the chance encounter of a young woman and a professional athlete for one night. What was initially intended to be a simple one-night stand will take on a much deeper turn for the two main characters.

“My character finds himself at a crossroads in his life. . It all happens in one night. But the pandemic has complicated things a bit; filming must have spanned two years. It wasn't easy, but I'm pretty proud of this project,” says the actor.

♦ Ladies Night, for you ladies is presented at Place des Arts in Montreal tonight. The tour will then continue at L'Assomption on Tuesday.