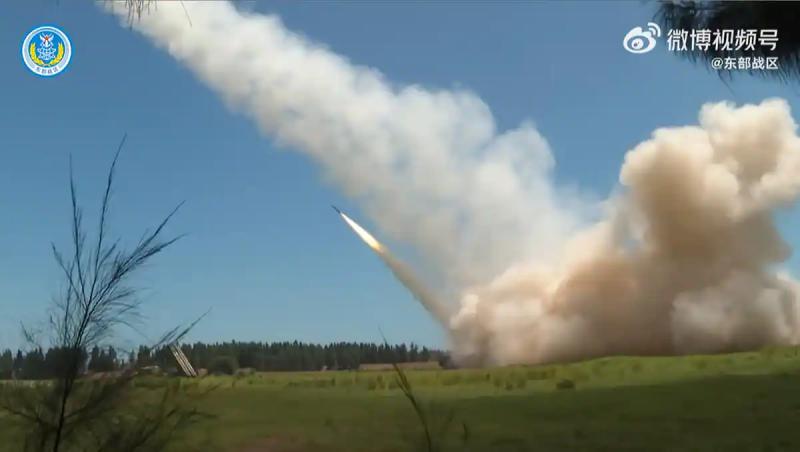 China was preparing to wrap up its biggest-ever military maneuvers around Taiwan on Sunday, an angry reaction to the visit of the leader of the American congressmen Nancy Pelosi to the island, which plunged relations between Beijing and Washington at their lowest in years.

U.S. number three Pelosi sparked fury in China with her visit Tuesday and Wednesday, the largest by a U.S. lawmaker to Taiwan in 25 years. Beijing responded by suspending a series of Sino-US bilateral talks and cooperation, including on climate change and defense.

The Chinese military has also launched the largest military exercises in its history, sending in fighter jets, warships and ballistic missiles in what analysts consider a mock blockade and invasion of Taiwan.

< p>On Sunday, it conducted “joint practical exercises at sea and in the airspace surrounding the island of Taiwan, as planned,” said the Chinese army's eastern command, which oversees Taiwan's eastern maritime space. country – and therefore Taiwan.

The drills were intended to “test joint firepower in the field and long-range air strike capabilities,” he added.

Taiwanese Ministry of Defense confirmed that China had deployed “planes, ships and drones” around the strait, “to simulate attacks on the main island of Taiwan and on boats in our waters”.

Beijing also sent drones over the outer islands of Taiwan, he said.

In response, Taiwan says it has mobilized a “joint intelligence, surveillance and reconnaissance system to closely monitor the enemy's situation” and sent in aircraft and ships.

These extensive maneuvers are to be s to be completed by midday, although Beijing has announced that new “live-fire” exercises will be conducted until August 15 in the Yellow Sea, which separates China from the Korean peninsula.

To prove how close it had approached the Taiwanese coast, the Chinese army on Saturday published a photo taken, according to it, from one of its military ships, where we see a Taiwanese navy building a few hundreds of meters only.

This shot could be the closest to the Taiwanese coastline ever taken by mainland Chinese forces.

The Chinese military also released the video of one of his fighter pilots showing, from his cockpit in full flight, the coast and the mountains of Taiwan.

Missiles flew over Taiwan this week during drills around the island, according to Chinese state broadcaster CCTV, in what would be a first. its “malicious neighbor” and calling on Beijing on Saturday to “immediately stop raising tension and carrying out provocative actions aimed at intimidating the Taiwanese people”.

Several experts explained to AFP that these exercises served as a warning: the Chinese army now seems able to carry out a total blockade of the island, while preventing American forces from coming to its aid.

“In some areas, its capabilities may even exceed those of the United States,” notes Grant Newsham, a former US Navy officer and researcher at the Japan Forum for Strategic Studies.

“If a [future] battle is confined to an area directly around Taiwan, then the Chinese navy will be a strong opponent. And if […] the Americans and the Japanese do not intervene, things will be very difficult for Taiwan.”

The extent of the maneuvers and Beijing's decision to withdraw from crucial bilateral dialogues on climate and defense have sparked a barrage of condemnation from the United States and its allies.

US Secretary of State Antony Blinken said in Manila on Saturday that the United States is ” determined to act responsibly” to avoid a crisis after the “total disproportion”, according to him, of the Chinese reaction.

China should not “hostage” the discussions on issues like the climate change, because it “does not punish the United States, but the whole world”, he added.

UN Secretary General Antonio Guterres, meanwhile, warned that “it is impossible to solve the most pressing problems in the world without an effective dialogue and cooperation between the two countries”, according to its spokesperson pineapple.