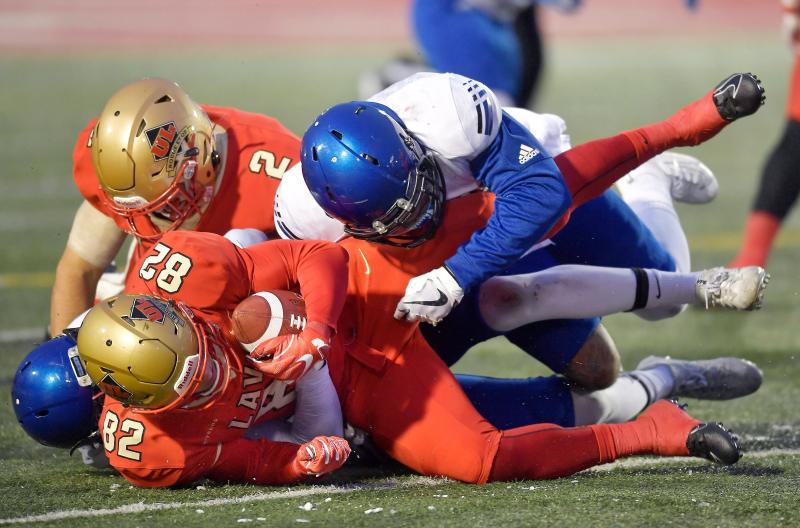 With four consecutive wins and five in the last six games, are the Université de Montréal Carabins the big favorites in this first duel of the season against the Rouge et Or de l'Est? Laval University?

The Blues swept the Reds for the first time in their history last year. Two regular season victories and a first Dunsmore Cup title on home soil helped the Carabins reach the semi-finals at the national level.

The two rivals will meet on Saturday at the Claude-Robillard sports complex.

For a long time the team to beat in Quebec, the Rouge et Or have no intention of sticking their heads between their two legs in the metropolis. “We're going to show up in Montreal without complex,” said head coach Glen Constantin. We have nothing to envy to the Carabins. We have the talent, the chemistry and the cohesion to compete. We are better equipped than last year. »

The Laval driver is not concerned about the most recent results between the two RSEQ powerhouses. “We leave the statistics to the media and we don't look at it,” he said. On our side, we focus on football. Many of those six games were close and decided by possession. Carabins against the Rouge et Or will not weigh in the balance.

“ I remember that in 2018, we lost three times against Laval and we won the Dunsmore Cup in 2019, underlined the veteran defensive back. A single season cannot define a team. Our 2021 successes will have nothing to say. It's a new era that begins and I think Laval will come stronger than ever. that the Rouge et Or awarded to the McGill Redbirds last Saturday. He's not expecting a ride in the park.

“ McGill was betting on a new quarterback [Eloa Latendresse-Regimbald] and a new offensive system, underlined the pilot of Blues. He's a very talented quarterback. Within the RSEQ, we have the best vintage of quarterbacks since my debut in 2010. It is not easy to prepare in these circumstances. As for the Dunsmore Cup last year, I can't remember the stats. Our offensive and defensive lines will have to dominate and we will have to protect the ball. ”

Play until the whistle

Among the best pivots in the country, Jonathan Sénécal represents a constant threat to opposing defences. “Jonathan's strength is that he runs to find a place to shoot,” Constantin explained. He is a very talented quarterback who is very mobile and understands well what is happening in front of him.

“It's certain that our covers will have to be tighter than in the game at McGill, continued Constantin, but the watchword this week in practice is that our defensive backs must finish their games until the shot of whistle. Their quarterback extends the games and you have to be ready. »

Even if the Rouge et Or have a strong propensity for to throw the ball since the start of the season, Iadeluca is wary of the ground attack of his rivals.

“Like us, Laval wants to present a diversified attack and we must respect both sides,” he said. Their offensive line has two 5th year players [Nicolas Guay and Nicolas Thibodeau] and Laval has a very good offensive with Arnaud Desjardins and Kevin Mital who play very good football. »

A line secondary who wants to recover

The Rouge et Or secondary line had a difficult afternoon of work during the game against McGill last Saturday.

” We made several assignment errors and we don't want the situation to repeat itself, underlined the veteran defensive back and captain . We gave a lot of yards. We were not satisfied with our defensive performance and we want to improve. We missed interceptions. Me first. The video tapes are going to be really useful, which we didn't have during the game at McGill. ”

If the challenge is great, Lavallée is happy to rub shoulders with pivot Jonathan Sénécal.

“ I'm excited to face a quarterback who throws the ball very well and who is on top of his art, underlined the product of the CNDF. It's never been so true to play to the whistle against a guy of Sénécal's caliber who finds a way to make big plays in difficult situations. ”

Although communication in the caucus for his offensive teammates should be easier, Lavallée would have liked to perform at the CEPSUM.

“ It's a shame because it's exciting to play in front of a hostile crowd. I can't wait to see the environment in Grasset. In my only game with the CNDF, we lost in overtime.”

Despite the departure of a few receivers and the injury of wide receiver Hassane Dosso, who was selected on the 2nd team of all stars in the country in 2021 by virtue of his 48 receptions and four touchdowns for 757 yards, Lavallée does not underestimate the Carabins receiving group.

“There are always new faces among the receivers and they find ways to make big plays,” he said. If they are on the field, it is because they are good players. I don't take anything for granted.

Carl Chabot has always had success against the Rouge et Or.

“He has been one to watch since his university debut, Lavallée said of the half-insert of the Blues. He is excellent in space because of his agility and you will have to make sure to contain him and tackle well. He's more physical on the field than the video might suggest. »

The Carabins will be watching Kevin Mital at all times

The Carabins defense will be keeping an eye on slotback Kevin Mital, who had four touchdowns in his last game.

Kevin Mital's name is on the lips of college football fans.

Has four touchdowns, which is a team record, against the McGill Redbirds, the Rouge et Or slotback leads RSEQ receivers with 12 receptions for 200 yards in two games. Its five majors also represent a vertex.

“I was on a 'high' Saturday night after the game, but it was all over the next day,” said Mital, who will return to the Complexe sportif Claude-Robillard, where he played his three collegiate seasons in the André-Grasset's Phénix uniform. I can't wait to play the Carabins. This year, the focus is on us, but we watched a few films to find out their trends.

Mital's exploits obviously did not go unnoticed in the Carabins camp. “Kevin is playing very good football and we will have to limit the number of plays he makes,” said head coach Marco Iadeluca, who was Mital's offensive coordinator for two seasons in Grasset. He is one of the most explosive receivers. We can't stop him and we can't use the same recipe to slow him down for the whole game. If we cheat by doubling it, other receivers will make us pay.”

Mital expects special attention. “They're going to do everything to slow me down,” he said. Last year, the outside linebacker on the short side [Harold Miessan] was slowing me down and the defensive back [Bruno Lagacé] was waiting for me 12 yards out. I line up in several formations and it becomes more difficult to overtake me. If they do, they're going to miss a player somewhere and other receivers can take advantage of that.”

Lagacé is fully aware of the threat posed by his former teammate. “We will have to keep our eyes on him and always know where he is on the ground, explained the student at HEC and teammate of Mital for two seasons to André-Grasset. He has received a lot of balls since the start of the season and that has allowed us to learn a lot about him. Kevin is a special player and as Charles-Antoine Sinotte [TVA Sports analyst] says, he can do it rain or shine. ”

“On the videotapes, we see that he is fast,” added Lagacé. He's gotten back to Grasset's form and that seems to be helping him.

As he told us last week, Mital is now tipping the scales at 215 pounds, the same weight as in his senior year of college.

He played at 230 pounds last year. In his only season with the Syracuse Orange in the NCAA, the scale read 248 lbs in anticipation that he would be turned into a tight end.

If the Rouge et Or offense has had some good times since the start of the season, Mital recognizes that the game against the Carabins has a special meaning.

” For the offense, this will be our real test . Sherbrooke had a good defense and McGill made mistakes. We know that the Carabins like to put pressure and Justin [Éthier] is ready to place his pawns according to what Montreal will present to us. I can't wait to return to Claude-Robillard, a field where I know the end zone well.”