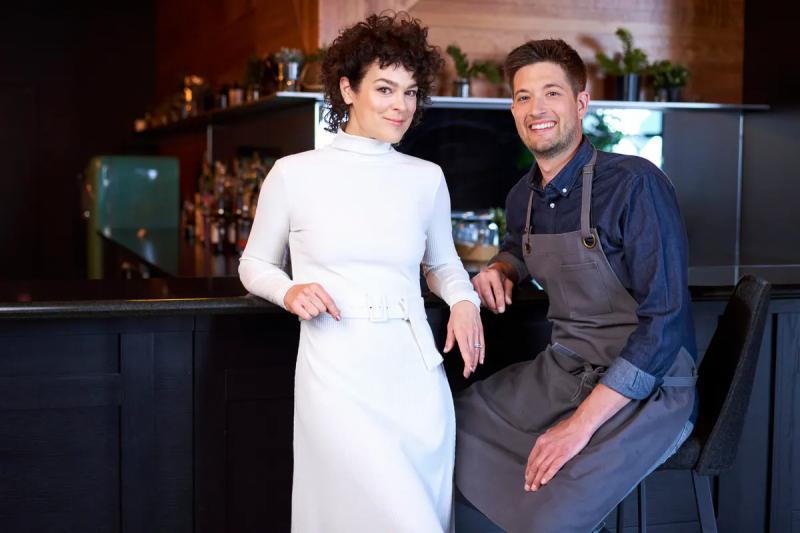 We talk about money, “food cost” and profitability. And in all of this, the customer will be entitled to a large share of the cake.

“We are in the reality of catering. It's not just about creating good recipes, but it's also about putting it into practice. To cook for 40 customers, in a competition with three other candidates who are fighting squarely to win their place, it is very stimulating and very stressful, “said the chef owner of La Cabane d’à Côté, Vincent Dion Lavallée.

“We wanted to give the candidates a laboratory. Where these talented people were going to have all the tools, real customers in a real restaurant to test and go after their dream to see if they were going to be able to handle the pressure, to be profitable, to have leadership with the team and to have proposals for dishes that not only would attract the public, but also with which they would be able to maintain quality,” said Renaud Chassé, producer of the show.

“We shed light on a world that has been frankly hard hit by the pandemic which reveals to us that again and despite everything; there are dreamers, entrepreneurs who want to roll up their sleeves and who want to dive into the restaurant business with their culinary DNA, their personality to put forward in a restaurant concept that looks like them”, for his part underlined the entertainer and hostess, Hélène Bourgeois Leclerc.

The concept of the show is Quebec. Produced by Sphère Média, “Le Restaurant” opposes a dozen future restaurateurs who will have to convince, yes, the mentor judge Vincent Dion Lavallée, but above all the customers who will taste their dishes.

Each week, the participants will first have to stand out in the “creation challenge”, which the head animator will throw at them. The three worst will then be sent to the “big service”. This is where the 40 or so real customers come in. Once the room is open, they will each choose a dish from the options on the menu and write it down at the end of the service.

The chef having obtained the lowest average will have to leave “Le Restaurant”.

At the very end, the winner will be able to put the clamp on $50,000, as a down payment to make his project a reality.

The clash of experiences

The 12 candidates were chosen for their aptitude and the concept of their restaurant. This sometimes gives rise to a shock of experience, where in the same service the Mexican counter can face the bar or the fine gastronomy, and this, in always very targeted challenges of the restoration like the customers in a hurry or the small budgets.

And it is not because a chef has a lot of experience or that his cuisine is the most refined that he will necessarily please the customers, recalled the chef animator.

“The customer arrives, eats and judges. We were very surprised to see dishes, which for me were not on point or good, but which won the best marks, perhaps even from the competition […] and that creates shock waves sometimes” added the chef who we can see in the 11th season of “Un chef à la hut”, currently filming.

And to spice up the competition a little, Hélène Bourgeois Leclerc will of course , sprinkle occasionally, here and there, a few pinches of “twists” for the candidates.

A zest of novelties

For its new television season, Zeste, which has seen its audience grow by 54% in the past year, welcomes many new features this season, including a dozen acquisitions and new seasons for its original productions.

“Three times a day and you”

This Wednesday at 7 p.m. begins the new season of “Three times a day and you”. This season, Marilou will receive 24 guests in her kitchen with whom she will chat while cooking.

Just before the start of the winter season of “Coups de food”, Sébastien Benoît invites a few personalities, among others Karine Gonthier‐Hyndman, Benoît Gagnon, Sabrina Cournoyer, Benoît Roberge and chef Normand Laprise, at his holiday special.

Chefs Patrice Demers and Ricardo Larrivee both participated as guest chefs in the Food Network Canada culinary competition “Le mur des pâtissiers”. Under the gaze of 12 top chefs, the best amateur pastry chefs in Canada will compete to win $10,000.

Gordon Ramsey launched a brand new culinary competition at the beginning of the year which pits fifteen chefs against each other in three superimposed kitchens. The highest has privileges while the lowest has to make do with the means at hand.