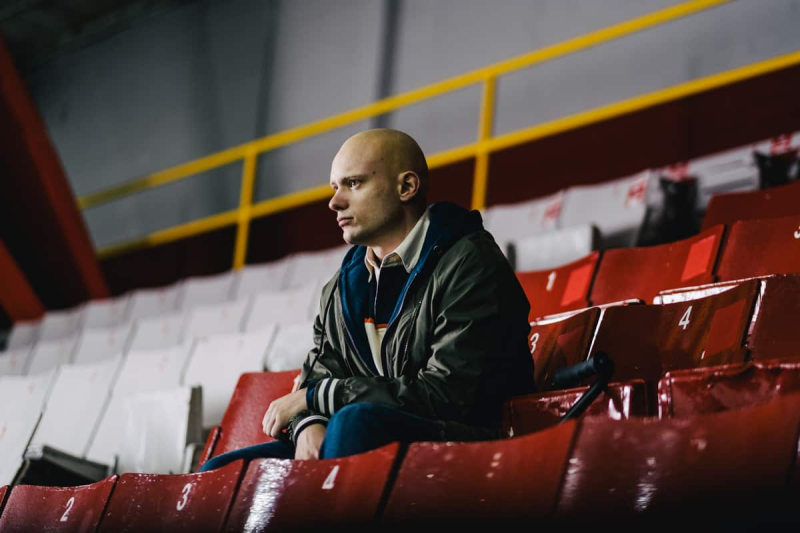 Antoine L'Écuyer took a few weeks to find his bearings on the set of the second season of the series “Les bracelets rouges”, he who takes over the role of Justin following the heartbreaking withdrawal by Noah Parker due to a scheduling conflict.

The 25-year-old comedian, who has been in the business since the age of 10 and won a Gemini for his portrayal of Jacob in the 'My Son' series, had his head shaved to impersonate Justin, with daily touch-ups. “It irritates the scalp, but it puts you in character immediately.”

He made Justin his own working alongside director Benoit Pilon, who took over from Yan England. His challenge was to reproduce the illusion that Justin moves around with a prosthesis, a month after having obtained it.

“It is so well written, the two screenwriters give notes in the script to the game, so everything was there to help me,” Antoine L'Écuyer told Agence QMI.

Resuming a role in a series can be “difficult”, he admits, but the challenge thrilled him and, above all, he wanted to join a project that seduced him as a viewer for the resilience of patients in the face of the disease. . “They support each other in a gang spirit, it's really touching.”

Return of the disease?

Justin is still in love with Flavie (Audrey Roger), but it will not be a long calm river for the couple, whose wish is to live together. We also hear Flavie say, in the trailer, that she fears losing Justin. We are also suggested in the images that Justin meets a girl at his wheelchair basketball activity, but neither the interpreter nor the authors, Michel Brouillette and Stéphanie Perreault, wanted to come forward on this subject.

“Justin will focus on basketball, but he will worry about his cancer coming back. It’s very recent, his healing”, summed up Antoine L’Écuyer, two weeks after the conclusion of filming.

The disease being what it is, could Justin actually be forced back into the hospital to undergo further chemo treatments? And Flavie? “We're going to see them at the hospital, but we can't say how,” said Stéphanie Perreault, who also plays the psychologist Marilou in the series.

For his part, Félix (Anthony Therrien) remains luminous when we find him, six weeks having passed in the intrigues following the first season. “He will experience the biggest challenges of his life,” said Ms. Perreault, when he will have to undergo an ninth operation. He will even begin to have premonitory dreams about the imminent death of another member of the red bracelets…

As for Kevin (Étienne Galloy), he will always be around because of the community work he he must perform at the Hôpital de la Rive.

Lou, she will learn bad news and will remain isolated in the psychiatric wing. As for Albert (Malick Babin), who has finally come out of the coma, his mother Anne (Isabelle Blais) will want “his rehabilitation to go faster”, revealed Mr. Brouillette, who also plays physiotherapist Alain in the series.

We will also meet Rania (Alecia Haswani), 8 years old, survivor of a fire and whose family is between life and death, and Margot (Margot Blondin), who is suffering from cancer of the ovaries and whose father (Patrice Godin) has not yet completely mourned his wife, who died of the same disease.

The authors wanted to be part of the continuity in the second season by continuing the curve of the characters and mixing drama and humor.

“We were concerned not to redo the first season, but we also didn't want to disappoint people who want to rediscover the characters they love,” said Mr. Brouillette.

Produced by Encore Television, the 10 Epis odes from the second season of the series “Les bracelets rouges” will be broadcast starting Tuesday, January 10, at 8 p.m., on TVA.