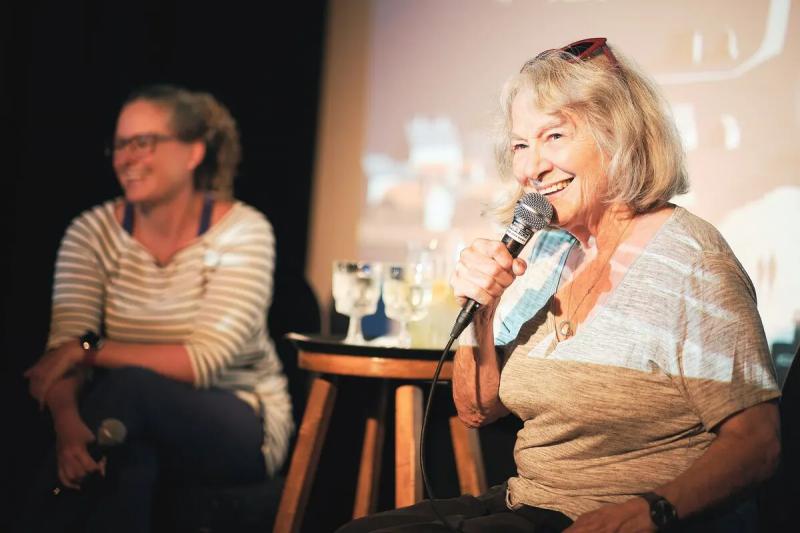 PERCÉ – On May 6, 1972, the film The true nature of Bernadetteappeared for the first time. Fifty years and a few weeks later, it was screened again, this time in Percé as part of the Les Percéides festival with one of the film's main performers, Micheline Lanctôt.

“It will be up to you to judge, but in my opinion, the film has aged very well,” said the one who is at the festival as guest of honor and president of the jury, just before the screening of the feature film, presented in a version restored by the Éléphant organization: memory of Quebec cinema. Presented like all the other films of the festival in the old Charles-Robin barn which became a cinema last July, the intimate atmosphere of the place gave way to an ideal level of concentration for listening to the film.

< p>After the presentation, which seemed to have been appreciated by the public, a question period on the film was scheduled. However, due to the boundless curiosity of the spectators, she focused instead on the multiple hats of actress, director and former university lecturer worn by Ms. Lanctôt.

“And activist,” she added in an interview with QMI Agency after the public question period. “I was part of the Directors Association, participated in a lot of fights, because there was a lot to do at the time. I stopped now because there are others who have to take over.”

Unfortunately, the shooting conditions have deteriorated a lot in recent years, mentioned the director of award-winning works such as Sonatineand For God's Sake. “It has deteriorated for all kinds of reasons because the industry is currently in crisis due to the multiplication of platforms. The distribution problem is not solved, and no one knows where it will go. Some predicted the death of cinema in theaters, but with the fairground origins of this art, I think people will have a hard time abandoning theaters,” she said.

Bernadette at the time of the Me Too

Questions were also asked about Bernadette's history and its current resonance . A lady wondered how someone younger, having grown up during the time of the Me Too movement, would have reacted to the character of Bernadette, a woman who adopts free love. Having never broached the subject with a younger audience, Ms. Lanctôt could not comment on their perception, but she remarks on how important a character like that can be nowadays.

“Bernadette is a woman full of light, a character that we would need. I think with the eras of wokes and Me Too, we're turning against each other, and it's good to have that light source”, she underlined.

The question-and-answer session moved a few hours later to aboard the Captain Duval II sailing around Bonaventure Island and Percé Rock. We were able to learn that Mrs. Lanctôt's first jobs in animation were decided in Percé and we were able to discover the underside of the shooting of Sonatine and the incredible story behind her Silver Lion , delivered after several adventures. Ms. Lanctôt being a veritable chatterbox, the expedition ended nearly 30 minutes after the scheduled time, but no one complained, everyone having been entertained by her stories.