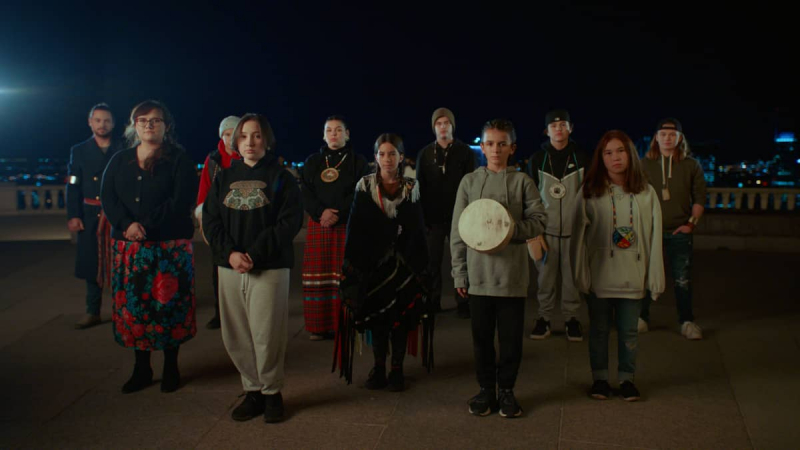 Talking stick in hand, Abenaki director Kim O'Bomsawin and her team traveled more than 30,000 kilometers between September 2020 and May 2022 to create the new documentary series “Let us tell ”, which is coming to ICI Télé over the next few Saturdays.

Huge fresco, the series, as useful as necessary, seeks to restore the facts on the history of the First Peoples, but also on that of Quebec. Without pointing fingers, without rancor and without wearing rose-colored glasses, the story, told by the 11 Aboriginal nations of the province, addresses territory, identity, spirituality and reparation, through different issues and ancestral knowledge.< /p>

“It was obvious to me that this series should be anything but miserable or victimizing,” said Kim O'Bomsawin during a round table in which the QMI Agency participated. With her project, the director has rather sought to promote the rebirth of indigenous peoples and their words.

“We focus more on what we are in the process of reclaiming. It's really a series of celebrations of our cultures, but also of our resistance,” she added.

With nearly a hundred speakers, including some well-known faces, such as actor Brad Gros-Louis, doctor Stanley Volant, astrophysicist Laurie Rousseau-Nepton and rapper Quentin Condo, all the creative positions were filled by members of the First Peoples.

“We wanted to make an authentic series and for me that necessarily involved the participation of the communities themselves, so by sending these young and less young researchers [a dozen], that we either trained or were already in the industry, going to do their research within their own nation, it gave us extraordinary material,” explained Kim O’Bomsawin.

She also hopes that “Let us tell” can give people ways to connect with each other. “In the media, we always talk about the same social problems, as if we were reduced to just that, whereas for me, my experience when I go to any community is quite the opposite. […] This is the access I want to give people,” she said.

Teaching and transmission through social networks

For rapper Quentin Condo, who was present at the round table, “Let us tell” is an excellent way to overcome certain shortcomings of history lessons in the school curriculum.

“The system of Today's education doesn't really talk about our history. With this documentary, we have the opportunity to tell our story, our ways and our importance on the planet, and the nature around us and how we live with it,” he replied.

He also underlined the considerable contribution of new broadcasting platforms, in particular Tik Tok, in the education of young people. This new platform allows First Nations youth to speak and expose their reality, but also to bring together a community of thousands of people. This is the case, for example, of Shina Novaling (Inuk from the community of Puvirnituq) who has more than four million subscribers on his account, of Xavier Watso or even of the multidisciplinary artist Catherine Boivin who, together, have more than 70,000 subscribers.

According to him, “young people now have more opportunities and openings to talk about First Peoples”.

With a “more contemporary” final episode, which notably addresses the place of Aboriginal and non-Aboriginal women, ecology and food sovereignty, “Laissez-nous parle” was produced by Terre-Innue, in collaboration with Radio-Canada.

“Let us tell” is available in different multi-platform formats. It includes a podcast series on Radio-Canada OHdio, a website, an immersive dome film for the Rio Tinto Alcan Planetarium in Montreal, as well as an exhibition and educational guides.