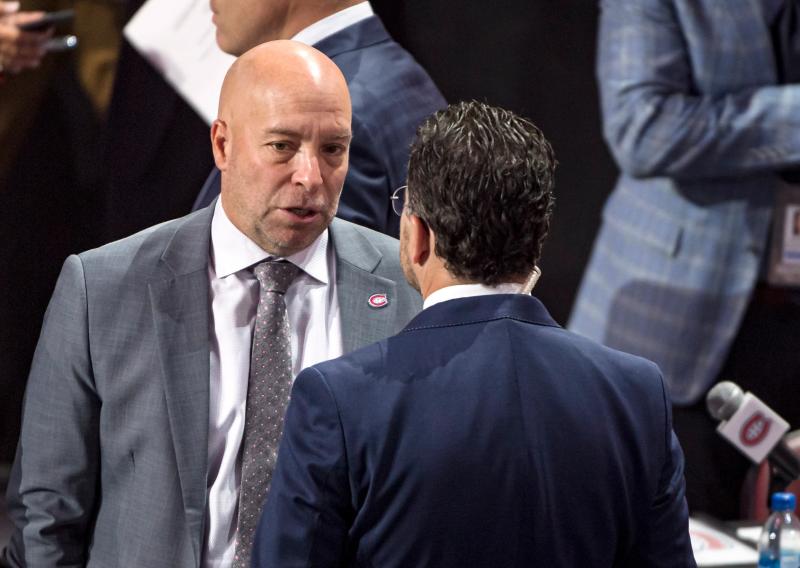 Kent Hughes made the decision dictated by the Canadian's financial situation.

With limited purchasing power, rather non-existent, there is no d 'other alternatives than refraining from excessive spending, spending that does not fit in any way with the business model concocted for the revival of the organization.

This does not mean that Hughes has closed books.

Did you bet that Johnny Gaudreau would settle in Columbus? I very much doubt it.

Did you think Max Pacioretty would end up in Carolina?

The general managers who had the space to maneuver in the aisles of the free agent market reacted… and quickly.

Now when we analyze the actions taken by the competition, if we want fill gaps, we will keep an eye open for free agents who have not found takers and we will continue discussions with certain counterparts.

Meanwhile, when we look closely at the work done by Pierre Dorion of the Ottawa Senators and Steve Yzerman of the Detroit Red Wings, the gap between these two Habs teams is even greater.&nbsp ;

Both organizations are now aiming for a playoff berth while Hughes and the Canadiens can hardly believe that is a realistic goal.

Hughes went window shopping when the market opened, he will continue to do so, but he always keeps in perspective that he must first cut spending, that is to say divest himself of unjustified contracts and unjustifiable which prevent him from making some acquisitions.

For the moment, he finds himself in the same situation as Dorion and Yzerman who, over the past few years, have had to show patience and foresight, constantly modifying the roster, while ensuring that young skaters recruited will have the opportunity to move up the ranks.

Of course, there is the risk that fans will show mixed interest in the team, but after such a disappointing season as last year, the team's fans know very well that the Canadian must follow the strategic steps accompanying the relaunch of an organization.

I believe the supporters will support the moves of the new decision makers. We saw them demonstrate during the repechage session. They appreciated the efforts made by Nick Suzuki and Cole Caufield last year. They applauded the work of Martin St-Louis.

They know very well that the new leaders have a concept and that they intend to respect it from the culture we want create inside the company.

Hughes has several issues to resolve. And he will get there. It is no longer a secret that there are veterans fueling the discussions, including Jeff Petry.

As Hughes said yesterday afternoon, the offers do not meet our expectations at all and there is no question of paying part of the defender's salary. By the time training camp opens in September, he's sure to get more interesting offers.

However, Hughes won't give up, especially when some GMs realize there are a few skaters in the formation who are able to give more depth to their team.

And, let's not forget that the next draft will be very attractive. Connor Bedard will be the coveted player, but scouts will tell you that there are five or six other skaters who will attract attention.

In the process of re-launching the team, there is surely reference to the vintage of 2023.

Okay, which teams have made significant progress during the opening of the market? free agents without compensation?

1. COLUMBUS: when it acquired a player who had 115 points last year; inevitably, this is a big win.

2. OTTAWA: Alex DeBrincat, Cam Talbot, Claude Giroux. Bon DeBrincat was acquired a few days before the opening of the free agent market, however, Pierre Dorion did a colossal job. Is Talbot a safe bet in net? I'm not convinced.

1. CALGARY: The departure of Johnny Gaudreau will have serious consequences for the next seasons of the Flames. What will Matthew Tkachuk do? Will he want to stay in Calgary?

2. NY ISLANDERS:Alexander Romanov was acquired following a transaction, but Lou Lamoriello drew a blank in the Johnny Gaudreau file. A team that has done nothing to improve its offense.

A case to watch. That of Hockey-Canada and the events that marked this team, events that forced the leaders of the organization to pay more than $3M to the victim of a rape involving several players of the formation.

All national team skaters will be invited to testify.

Hockey Canada officials will no longer be able to hide behind testimonies that have raised the ire of politicians.

And, from his New York office, Gary Bettman intends to follow events with great interest. Players involved in this scandal, are there any currently playing in the league?