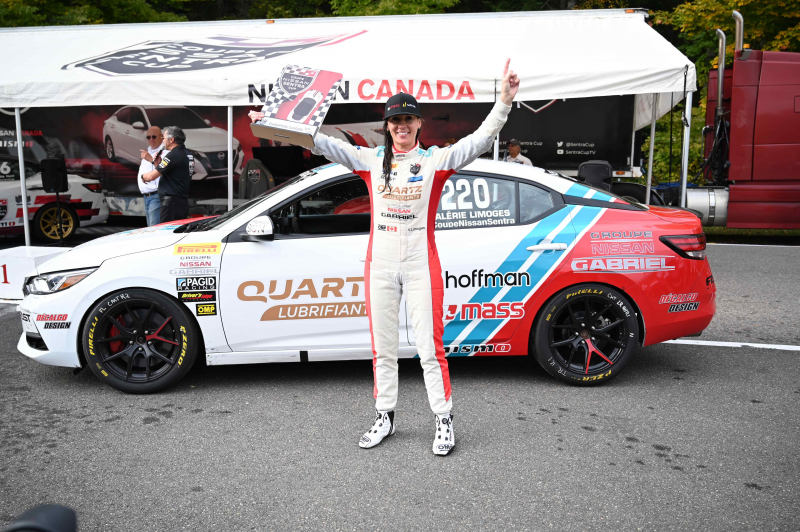 Champions of the Nissan Sentra Cup and the NASCAR Pinty's Series respectively, Valérie Limoges and Marc-Antoine Camirand were honored Thursday evening at the Annual Banquet of the Gilles-Villeneuve Museum held in a hotel in the downtown Montreal.

Limoges has been awarded the Gilles-Villeneuve Trophy for the second time in three years. This recognition symbolizes the combativeness and excellent performance on the track of a Quebec driver.

Camirand is the winner of the Bertrand-Fabi Trophy, awarded annually to the Quebecer who has shown himself the most on the scene. national or international. The driver from Saint-Léonard-d'Aston had already been the recipient in 1999 and 2000.

These two trophies, initiated by the organization Auto Sport Québec in the early 1980s, rewarded drivers renowned in the past including Alexandre Tagliani, Andrew Ranger, Richard Spénard and in particular Patrick Carpentier.

“Proud of this honor”

“I'm proud of this honor but, let's face it, a little surprised. Consistency has been key to my success in 2022 and I hope this championship will inspire other women to race,” said Limoges.

“The idea is not to win against men, but to win plain and simple. I don't make the difference”, she added.

Limoges is only the second woman to deserve one or the other of the trophies after Nathalie Richard, winner in 2009 (Bertrand-Fabi ) and in 2012 (Gilles-Villeneuve). This rally co-driver was honored jointly with her competition partner, Antoine L'Estage.

As a reminder, Bertrand Fabi, originally from Sherbrooke, was considered one of the most promising drivers of his generation. His promising career, however, came to an abrupt end in February 1986, when, at the Goodwood circuit in England, he lost his life during private testing in Formula 3. He was only 24 years old.

The 2022 season will forever be etched in Camirand's memory.

“I had a dream year. I knew we would be competitive, but to win three races and win the championship is beyond our expectations,” he says.

“I accept this trophy with great pride, but first I must thank everyone who has contributed to my success on the circuits. Starting with Jean-Claude Paillé, my sponsor, who believed in me. Thanks to him, we have formed a new, very competitive team. »

Camirand, who won the Gilles-Villeneuve Trophy in 1997, remembers the beginning of his adventure in the NASCAR Pinty's Series at the Grand Prix de Trois-Rivières in 2013.

“GP3R General Manager Dominic Fugère had approached me about taking part in a [Sportsman] support event and the winner was given a drive in NASCAR Pinty's for the weekend.

“J won the race when I thought it was over for me. I would probably have continued to drive BMW cars prepared by my father, but I did not believe in a professional career. »

In his first qualifying session, he set the third fastest time among the 30 entries on Saturday, before being forced to retire the following day following a collision.

< p>A thought for the White brothers

Camirand owes a lot to brothers Derek and Brandon White who supported him in his early days.

“They were the craftsmen from the start. They didn't have to help me that way, but they did. Without forgetting Robin McCluskey, my team leader, who was there in 2013 and who was also by my side this year. I had a thought for Brandon [who died of cancer two years ago]. I wanted to win this championship for him. »

Camirand, 43, will be back next year with the Paillé team and he will be looking to win a second consecutive title in the Canadian stock car series, which no driver hasn't succeeded since its inception in 2007. In the meantime, it will travel to Indianapolis in mid-December to attend NASCAR's annual banquet, where it will receive its championship ring.

It was also announced that Paillé had extended his contract with Andrew Ranger, three-time NASCAR Pinty's Series champion, for the 2023 season.

Tribute to Gilles… Villeneuve and a young prospect< /strong>

The evening was also an opportunity to pay tribute to Gilles Villeneuve who, in addition to bearing a famous name, has been involved in motor racing for 45 years. In recent months, he has made three humanitarian visits to the Ukrainian war zone. This contribution earned him the Claude-Giroux Trophy, awarded since 2014 to a personality from the world of motor racing whose exceptional contribution is underlined.

In addition, the mention “Hope” was awarded to Alexis Baillargeon for his excellence on the track in the discipline of karting. His recent performances on the circuits have ensured this young driver, barely ten years old, a participation in the Karting World Championship which will be contested in a few weeks in Portugal.