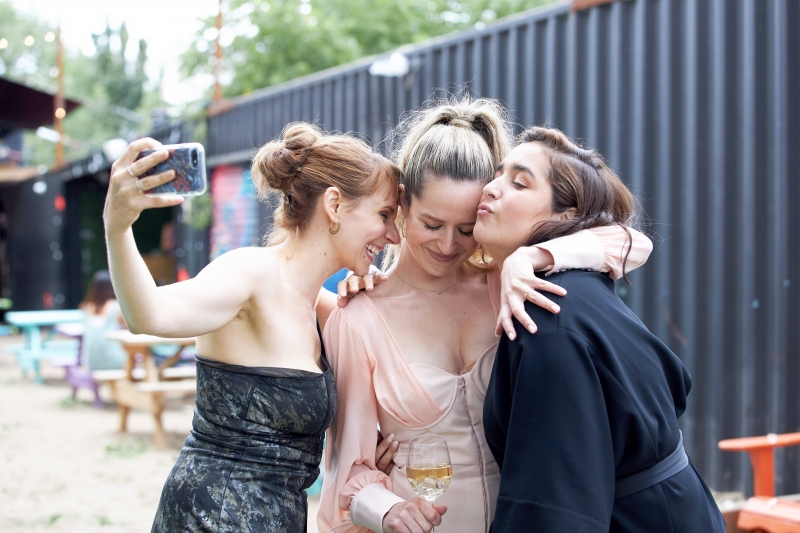 Who said that summer comedies should be limited to light or consensual humor? With Lines of Flight, a film adaptation of her play of the same title, actress and author Catherine Chabot set herself the challenge of laughter by jostling minds and provoking reflection.

Incisive portrait of the generation in their thirties, Lines of Flightfeatures three high school friends from the Beauce region who reunite in Montreal for a heat wave evening.

There is Audrey (Catherine Chabot), who leads a (too?) tidy life with her plumber boyfriend (Maxime de Cotret); Valérie (Léane Labrèche-Dor), an eco-anxiety radio columnist who lives modestly with her boyfriend, a philosophy lecturer (Mickaël Gouin); and finally, Sabina (Mariana Mazza), who earns a very good living by working in finance and who spins the perfect happiness with her new love, an English-speaking visual artist (Victoria Diamond). The further this reunion evening goes, the more the discussions will ignite and cause friction between the young thirtysomethings.

“Thirty years is a crossroads age when we arrive on the professional labor market and where we question our life choices”, observed this week at a press conference Catherine Chabot who herself co-scripted the adaptation of his play with Émile Gaudreault, in addition to having co-directed the film with Miryam Bouchard.

“In the film, the characters wonder if they are in the right place and if they have taken the right decisions in their life. They will all have a crisis that night.”

Catherine Chabot does not hide having transposed several of her anxieties and contradictions in this text which she wrote a few years ago and which was staged in 2019 at the Théâtre d'Aujourd'hui. Her worries about the future of the planet are omnipresent in Lines of Flight.

“The film is about the future of each of these friends. , individually. But it also speaks of our collective future,” she says.

“When I wrote the play a few years ago, I wondered if we could have children in a world like ours. My answer, I got it 16 months ago and her name is Joséphine”, she adds, referring to the birth of her first child.

“So, yes, there is hope, even if the film takes a very harsh look [at the current situation]. With eco-anxiety and the various crises that there are right now all over the world, we are all in a somewhat uncomfortable situation. I wanted the viewer to watch the film feel a bit like they're inside a casserole dish that's about to explode.”

It was after discovering Lines of Flight on stage a few years ago that filmmaker Émile Gaudreault (Liar, < em>From father to cop) had the idea of ​​adapting this story for the big screen. He slipped a word to the producer Denise Robert who immediately embarked on the project after having also fallen in love with the piece.

Gaudreault was originally supposed to direct the film with Catherine Chabot, but a scheduling conflict forced him to give up his place. This is when Miryam Bouchard (Mon cirque à moi, Do you hear me?) came into the project.

“From my first reading of the script, I fell in love with the characters, but I also thought about the legacy we leave to future generations, admits Miryam Bouchard. I found that very disturbing because I have a 14 year old teenager and I think the planet is being left in a terrible state for generations to come. I found it very interesting to participate in a project where you can both laugh and feel really guilty! There is no answer or solution offered in Lines of Flight. But there was in me the desire to provoke a little reflection.

According to Catherine Chabot, the cinema made it possible to bring a new dimension to her text first written for the theater by giving in particular access to the interiority of the characters.

“The camera can capture looks and moments of sadness, explains the actress and author. This allowed us to make the characters more complex, to understand them from the inside and to have access to their humanity. The play was much darker than the film.”

Lines of Flight, in theaters July 6.