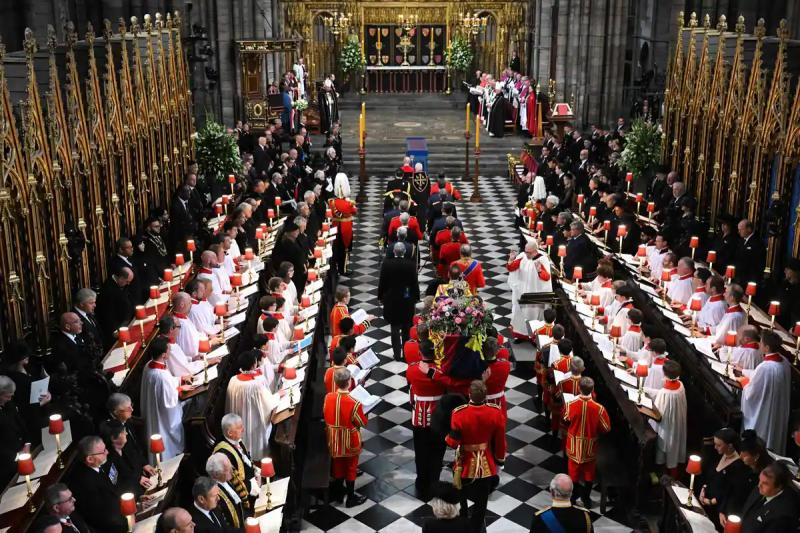 After the emotional recollection of hundreds of thousands of Britons, the coffin of Elizabeth II began its last journey in London on Monday for a grandiose funeral in the presence of dignitaries from around the world who came to greet the sovereign and her 70 years of record reign.

The coffin of Elizabeth II entered Westminster Abbey in the middle of the day, a Gothic jewel intrinsically linked to the fate of the deceased.

A page of history is turned with this State funeral of the last planetary queen, whose reign was unique in its duration and endurance, in front of 2,000 guests at Westminster Abbey.

With a pomp With a meticulous and tirelessly prepared unfolding, they complete a national mourning marked by an immense wave of collective emotion since the death on September 8, at the age of 96, of Elizabeth II in her Scottish castle of Balmoral.

Today people from across the UK, Commonwealth and around the world will pay tribute to the extraordinary life and reign of Her Majesty The Queen. pic.twitter.com/yuFxoo6Gdu

At 10:42 a.m. the coffin left the imposing catafalque on which it had been on display to the public day and night for five days, in the oldest chamber of parliament , Westminster Hall.

Draped with the royal standard and surmounted by the scintillating imperial crown, carried by eight grenadiers of the Royal Household Guard in characteristic red tunics, it was then placed on a gun carriage fired to the sound of bagpipes and drums by sailors of the Royal Navy to Westminster Abbey.

It was there that, still a princess, she had married the dashing Philip Mountbatten at the age of 21 in November 1947, before being there crowned on June 2, 1953, a year after becoming queen.

The coffin arrived in procession, followed on foot by King Charles III and the royal family. He will leave an hour later, at the end of the religious ceremony at 11:00 GMT, for a final trip to Windsor, 35 km west of the capital, where the Queen will rest.

A bell rang every minute, 96 times, before the ceremony.

From US President Joe Biden to Japanese Emperor Naruhito and French President Emmanuel Macron, the gratin of world leaders came to this first state funeral since Winston Churchill's in 1965. European royal families are also represented.

After the invasion of Ukraine, Russia was not invited. On the other hand, the first Ukrainian lady Olena Zelenska is present.

Never in years has London experienced such an influx of dignitaries. Never before had the police in the capital faced such a security challenge either.

In London, the surrounding streets are black with people. Young or old, curious or monarchist at heart, some dressed in black or sporting the national Union Jack, no one wants to miss this historic event. The day is a public holiday and some have even camped overnight, or even several days in a row, to secure the best vantage point.

“She worked so hard her whole life, she was dedicated to this country. She never gave up until the very end”, greets Margaret McGee, 72, who came expressly from Northern Ireland.

“I will tell my children about this moment. I will say: I was there!” Says Jack, 14, who came in the early morning with his parents to Hyde Park Corner, not far from Buckingham Palace.

Among the spectators, some had already lined up for hours, among hundreds of thousands of others, for several kilometers in London, to briefly pay their respects in front of the coffin before the doors of Westminster Hall closed permanently to the public on Monday at dawn.

A last tear or bow, and the feeling of having been part of history. “It's incredible”, confides to AFP the very last visitor, Chrissy Heerey, before joining the crowd which poured compactly into central London to attend the funeral by large screens interposed or to catch a glimpse of the funeral procession.

For millions of Britons, Elizabeth II was the one, only, reassuring anchor of stability in the convulsions of a changing world.

She brought 'stability' to a life' chaotic,” says THay, a 59-year-old man. He hopes Charles will do the same “because we need something to hold on to”.

In Windsor too, where the queen has resided since the coronavirus pandemic and where she will rest, the crowds are at their height. Before the ceremony, the public waits on camping chairs sharing coffee and food, in a festive atmosphere mixed with emotion. “Today we want to celebrate his extraordinary life,” Pauline Huxtable, 64, told AFP. “The Queen has always done her job with dignity. She was a mother figure.”

At Westminster Abbey, not a sound must disturb the solemnity of the moment – dozens of flights have been cancelled. Afterwards, the country will freeze for two minutes of silence.

The coffin will then depart followed by King Charles III, Queen Consort Camilla and members of the Royal Family, and will again be placed on a Royal Navy gun carriage before a historic procession, with great fanfare, through the streets of the central London, to Wellington's Arch, from where he will leave by hearse for Windsor Castle.

More than 6,000 servicemen will take part.

Elizabeth II was the world's oldest sitting ruler. During her life, she went through the Second World War, saw the dissolution of the British Empire, the entry and then the exit of the European Union.

She will be buried Monday evening in the privacy, in the George VI Memorial, annex of the castle chapel, alongside his parents and Philip, who died in 2021.

After exhausting days of travels in the four constituent nations of the United Kingdom, crowd bathing combined with the mourning of a mother, Charles III, 73, will have to write his own story.

Some dreamed of a rapid transition with the new Prince of Wales, his son William, 40. But Charles III promised, like his mother, to serve all his life.

Solemn, unifying, accessible and inclusive, his first steps were reassuring, with the soothing presence of Camilla at his side.

But while his popularity ratings have skyrocketed to 70% according to YouGov, the challenges, many, are just beginning.

Elizabrth II was at the time of his death, in plus the UK, queen of 14 kingdoms, including Australia, Canada and New Zealand. Some of these countries have made no secret of their desire to see their relationship with the monarchy evolve.

The United Kingdom will then resume the thread of its life suspended since September 8. The cost of living crisis and social unrest should soon be back in the headlines.