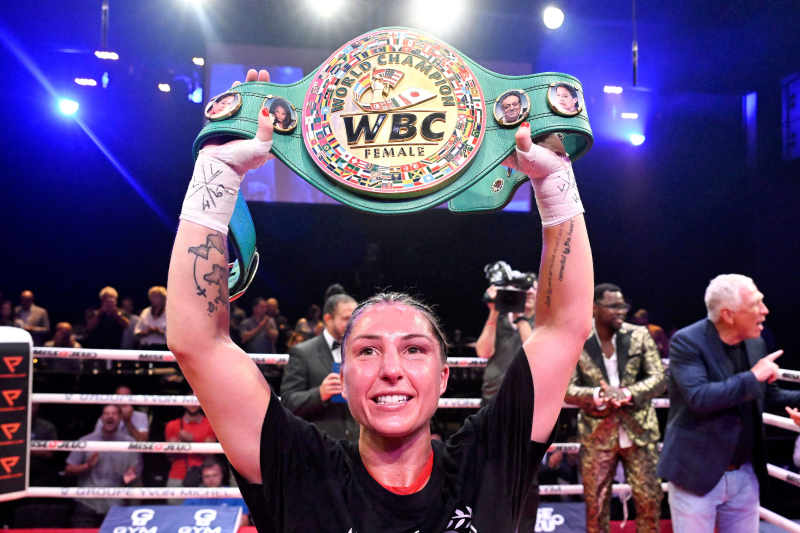 Despite her status as world champion, it would be wrong to believe that Quebec boxer Kim Clavel has already exploited her full potential on the international scene. Slowly, but surely, his name is circulating. His notoriety, however, has not yet reached that of the Claressa Shields, Katie Taylor and Seniesa Estrada.

“It's the fight that could open doors for me”, agrees- she, ten days before her unification duel on January 13, at Place Bell, against the Mexican Yesica Nery Plata.

Postponed following a nasty virus that hit Clavel, the meeting was first to take place at the beginning of December. Since then, in the string of reports traditionally published in the year's review, a recent list of the 30 best female boxers in the world published by the American network ESPN caught Clavel's attention. The exercise remains random, but it does not reflect less the breakthrough of the Quebecer.

“When I saw the list, I thought it was cool that my name was among those boxers,” Clavel said in a telephone interview on Sunday. I'm happy to see that my name is circulating, it makes me proud. I'm okay with being #18 right now in the sense that I've only faced one world champion so far.”

After her World Boxing Council title (WBC) won at the expense of Yesenia Gomez, last July, Clavel has the opportunity to significantly increase its value against Yesica Nery Plata. Especially since the unification fight, among the mid-flyers, will be presented on the American platform ESPN+.

In the famous list, Nery Plata, champion of the WBA, is at the 19th level, just behind Clavel.

« What I found interesting , is that there are several boxers in the lighter categories, including mine,” Clavel pointed out, listing Seniesa Estrada (4th), Yokasta Valle (11th), Evelin Bermudez (24th) and Yesica Yolanda Bopp (25th).

Semi-flyweights and strawweights are visibly gaining in nobility. An important fact for Clavel. His position, on a chart like ESPN's, will now trend upwards with a win on January 13. Briton Katie Taylor is the one at the top, ahead of Shields.

“We want to prove that we can be in the top 10 of the best boxers in the world, agreed the Quebecer. The reality is that you need to break into the United States and internationally. That's how the scholarships will go up. ”

Again on Monday, Clavel had 45 minutes of jogging on the program, then a session with trainer Stéphan Larouche to repeat some specific combinations.

A dream scenario for Clavel and… Estrada

Quebecer Kim Clavel, in the flyweight category, and American Seniesa Estrada, in the strawweight category, each have a plan in mind, after which they could very well find themselves in the ring one day. Maybe in 2024?

“I would like to get the other three belts at 108 pounds,” Clavel muses, well aware that the beginning of this great quest must go through a victory. against Mexican Yesica Nery Plata, on January 13, at Place Bell in Laval.

Already holder of the WBC title, the Quebecer would thus get her hands on the WBA belt.

Costa Rican Yokasta Valle is the one who, for the moment, is the WBO light flyweight champion and the IBF.

Regarding Estrada, her goal would be to become, at the same time, the unified strawweight champion (105 lbs).

“ Imagine the fight that that could do,” Clavel says, of a potential matchup between her and Estrada.

If it is still far from materializing, the plan in question is not absurd. Moreover, you should know that Clavel and Estrada, without having discussed it directly, had the opportunity to meet last September, in London.

“ We took a picture together  », emphasizes the boxer from Joliette.

The Groupe's protege Yvon Michel, like Estrada, had then traveled to England to attend the 100 % feminine gala, notably featuring Claressa Shields and Savannah Marshall.

If the evening had to be postponed to the following month due to the death of Queen Elizabeth II, Clavel did not only do tourism during his stay on British soil. She was able to bond.

For now, while the Quebecer has an appointment with Nery Plata, a different unification fight for the WBA and WBC strawweight titles is announced, in March, in the United States, between Estrada (23-0, 9  KOs) and Germany's Tina Rupprecht (12-0-1, 3  KOs).

< p>▸ Aiming to determine the fight of the year in women's boxing, the WBC placed the duel won by Kim Clavel against Yesenia Gomez among the six battles pre-selected. The vote continues via social networks.

▸ Faithful accomplice of Clavel, Danielle Bouchard has been named by the WBC in the category of coach of the year. She also finds herself in the running alongside Marc Ramsay, in particular.