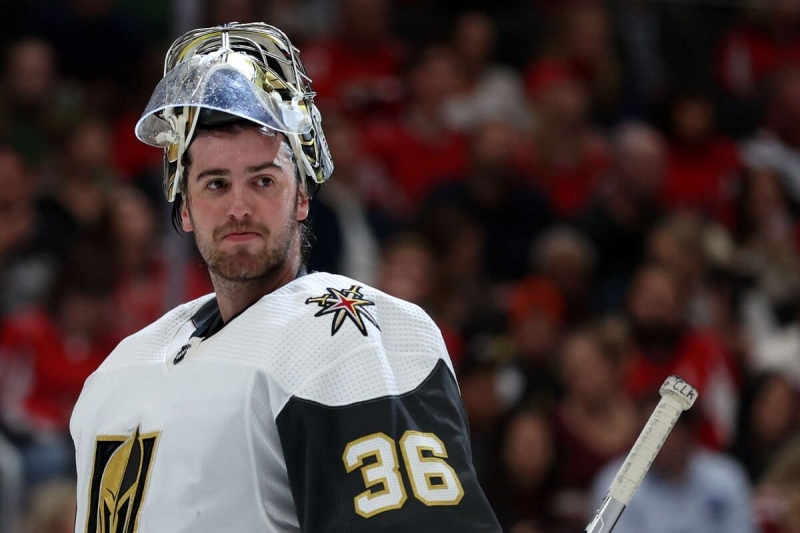 Logan Thompson's journey to the National Hockey League (NHL) was atypical, to say the least.

The Vegas Golden Knights goaltender climbed the levels one by one, being always underestimated, and he is now enjoying a start to the season that puts him in the race for the Vézina trophy.

The story of the 25-year-old hockey player is proof that you should never give up. Never drafted after modest performances in the Western Junior League, Thompson was invited to the camps of the Knights and the Washington Capitals.

The latter, however, had too many goaltenders in their ranks and no other training ECHL was unwilling to offer him a contract. He went to Brock University in St. Catharines, Ontario, to study sports management, while integrating the hockey program.

The Calgary native had a superb season in the OUAA and that allowed him to get along with the Adirondacks Thunder in 2018-2019, then the South Carolina Stingrays the following year. He was back in the Capitals fold, but that's where the Golden Knights made history.

Vegas awarded Thompson a two-year entry-level contract, who then led his farm club, the Henderson Silvers Knights, to the American League Finals. The Albertan's career was relaunched, he even played his first eight minutes in the NHL in 2020-2021 for an emergency replacement.

“It sucks not being drafted or to always be told you're not good enough. You have to use that as motivation. There are tons of talented hockey players, but you have to work and that's something that makes me happy, the way I worked,” he told the NHL website on Wednesday.

As with his first game in the gold uniform, Thompson took advantage of injuries in front of the Knights cage last year. With Robin Lehner on the sidelines at the end of the campaign, the youngster was thrust into the limelight. He went 10-5-3 with a .914 save percentage and a 2.68 goals-against average.

However, the Golden Knights could not qualify for the playoffs and Thompson received the invitation from Canada to participate in the World Championship. His star shone brighter and brighter, but much doubt surrounded Vegas ahead of the current season, especially due to Lehner's long-term absence.

Believing in his rookie's talent, but perhaps- worried about repeating his exploits from 2021-22, the Knights made a trade to acquire Adin Hill. This one has done very well so far, but Thompson has really proven he has the makings of a No. 1.

“You hear all that noise and everything that the pundits and data analysts had to say about me. It motivates me to continue what I do and to contradict people,” explained the man who has a record of 5-2-0, a goals against average of 1.73 and an efficiency rate of .938.< /p>

“I think the whole team is having the start we were hoping for. It took us a while to adjust to the new system, but since then our team has improved a lot compared to last year,” said Thompson, whose roster sits atop the Pacific Division.