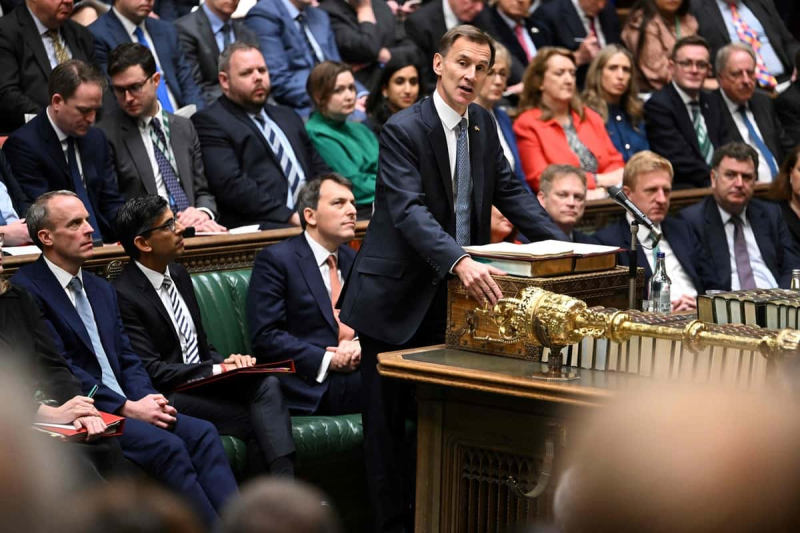 “I tried to be fair by asking those who have more to contribute more,” Hunt argued soberly before Parliament .

The new finance minister had the daunting task of reassuring markets chafed by previous Prime Minister Liz Truss' massive unfunded budget announcements, which sent the pound plunging to an all-time low and borrowing costs soaring of the state and the British.

Listing a package of measures totaling £55 billion, he mentioned lowering the top income tax threshold, and a raising the tax on windfall income from oil and energy giants.

A little less than half of this sum will come from tax increases, the rest from a reduction in spending, except in Health and Education: “fiscal policy will be tightened significantly next year, amplifying a recession already underway,” say economists at Pantheon Macro.

The country is already in recession and gross domestic product is expected to contract another 1.4% next year, predicts the OBR, the public budget forecasting agency. The institute also predicts an increase in unemployment.

Something to cool investors, and the pound has fallen against the dollar since Mr. Hunt's intervention, even if government borrowing rates were stable.

Mr Hunt's indigestible treatment to curb inflation and restore market confidence reminds Britons of the dark times of the financial crisis of 2008 and 2009, which was followed by an austerity cure with lasting consequences on public services, and particularly the chronically underfunded health system.

The Minister attributed the gloomy panorama in the country to global factors: the covid pandemic and the energy crisis generated by Russia and its invasion of Ukraine.

But the United Kingdom is also suffering from the impact of Brexit, which is weighing on trade and productivity.

At a press conference, OBR President Richard Hughes for his part pinpointed the political and fiscal instability, which has also weighed on the business climate.

Due to soaring borrowing rates, the share of government spending eaten up by debt interest is reaching a “high in a generation”.

Inflation soaring, currently at 11% , will cause “the standard of living to fall by 7%” in the United Kingdom in two years, despite government aid, “erasing eight years of progress”, notes the OBR.

Businesses too are struggling with rising bills and worker shortages, like Gursel Kirik, manager of a central London café: “every week everything we buy goes up… I'm really afraid of being forced to close,” he told AFP.

In addition to the increase in the exceptional tax on the profits of energy giants, Mr. Hunt also announced “a new temporary tax of 45% on electricity producers”.

A reduction in the tax thresholds for taxes on dividends and on capital gains will also increase tax revenues, and the reduction in a tax granted on real estate transactions will be limited in time.

The Health and Education are doing well and seeing their budgets rise, but other departments will see their spending growth slow over the next five years to generate £30 billion in savings.

Rare good news: pensions will be increased in line with inflation, as will some benefits, and the minimum wage will increase.

The SMMT, the automotive lobby, deplores a new tax on electric vehicles, which risks discouraging their adoption and delaying the energy transition.