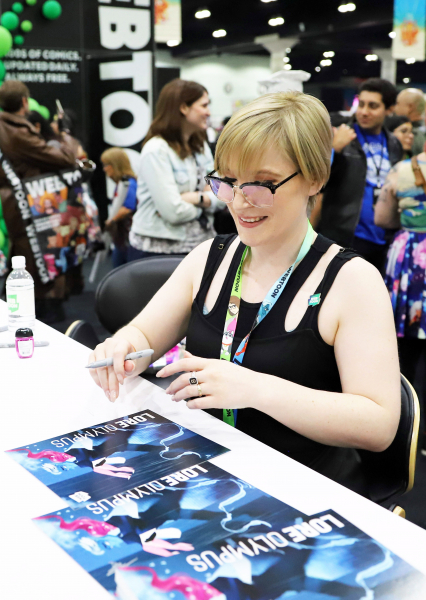 Author-illustrator from New Zealand, Rachel Smythe is a rising star in the literary world, and particularly in comics, for her graphic novel adaptation of the Greek myth of Hades and Persephone, Lore Olympus. Published in two volumes, the contemporary rewrite of this thousand-year-old surprising love story is a huge success both in bookstores and on social networks. A phenomenon.

The numbers speak for themselves. The Lore Olympus web-serieshas over 300 million views on Webtoon. The comic was eagerly awaited by fans: 24 hours after being announced for pre-order by Penguin Random House, it was number 1 bestseller in the Fantasy Graphic Novels category on Amazon. What's more, there are over 400 million videos using the #loreolympus hashtag on TikTok.

Rachel Smythe, talented and imaginative author-illustrator, offers a contemporary rewrite of one of the the most famous stories of Greek mythology, that which unites Persephone, goddess of spring, and Hades, god of the underworld.

Persephone is new to Mount Olympus. Her mother, Demeter, raised her in the mortal realm to protect her from temptations since she is promised a destiny as a sacred virgin. Persephone is allowed to go to college and live in the glamorous and fast-paced world of the gods. Her life changes forever when her roommate takes her to a drunken party where she meets a dark handsome man named Hades.

A work for adults

The tumultuous and toxic story of Hades and Persephone is not easy andLore Olympus is a work for adults.

At the outset, Rachel Smythe offers a warning to her readers.

“Lore Olympus regularly addresses themes of physical or psychological abuse, sexual trauma and toxic relationships. Some of the interactions in this volume may offend some readers, who may or may not read on at their discretion. Ask for help and support if you feel the need.”

Amazed at her success

In an email interview, Rachel Smythe explains that she was very amazed at the enormous success of Lore Olympus.

“I did not expect this at all. I did not expect to leave the “Canvas” section on the Webtoon platform. I didn't expect it to become my career. I never expected to make a work that would be seen a billion times. I still think I'm going to wake up and find it was all just a fever dream!

Rachel Smythe fell in love with the gods and goddesses of Olympus. “Greek mythology is both so shocking and beautiful…Each time I read the Odyssey, I am overwhelmed with my emotions. We are so lucky to be able to read such an old story that was written in a time when there was no printing press, and that the text has survived all this time.

The story of Hades and Persephone resonates in today's society.

“I think people gravitate to the myth of Hades and Persephone because that at its core it is a myth that addresses the relationship between life and death. There is perhaps something comforting in seeing life and death side by side, rather than being opposites.”