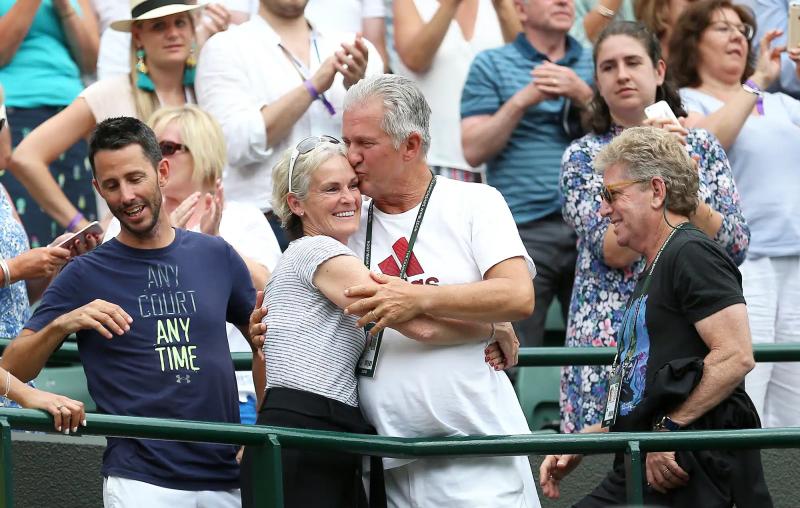 Fifteen years ago, the British Tennis Federation decided to hire Louis Cayer to manage the doubles teams. A decision that the leaders are surely happy to have taken at the time.

After leaving Montreal for England, Cayer was looking for a job in the world of tennis. His expertise was recognized all over the planet.

“When I arrived in Europe, I started working with a pair from Israel (Andy Ram and Jonathan Erlich), says Louis Cayer during our visit to Wimbledon. At the start, she was 60th in the world.

“I managed to get them into the top 10. Plus, they were crowned Australian Open champions in 2008.”

This tour de force did not go unnoticed. Judy Murray, Andy and Jamie's mum, spoke on Cayer's behalf to the UK FA.

“She saw me work and she liked my approach. Judy found out a bit about me and she knew that I came to London on a regular basis to hang out with my friend Stella” (who later became his wife).

“One thing leading to another, Judy helped me get the job. »

From Jamie to Joe

During his job interview, the leaders of the LTA (British Tennis Federation) asked him some interesting questions.

“They asked me if I could bring two players among the best doubles players in the world. I replied that if I only brought two, I would be very disappointed.

“Since that time, I have brought several in the world top 20. »

For example, Jamie Murray was ranked No. 1 in the world in doubles in 2016. He now has a total of 26 career titles, including two Grand Slam titles. And he's not the only one to achieve success.

Joe Salibury is the best doubles player in the world right now. He has also been advised by Cayer for several years.

Despite the success of several of his protégés, the Quebecer remains humble. He's only happy to see them achieve their goals on the pitch. And it's far from over.

When he left Tennis Canada, several of his colleagues wished him good luck. Cayer had his own vision of tennis.

“They told me that the British were very conservative in their approach and that I would have difficulty implementing my philosophy within this federation.

They were wrong. Cayer managed to get an attentive ear. After 15 years at the LTA, all the coaches use the same language and the same methods as him.

“Above all, we lead a person, a performer and a tennis player, explains the 69-year-old tennis man.

“The player must feel good to be effective in training. We must also pay attention to their mental health. »

What does a performer eat in winter?

“I define the strategy by objectives to win the match. The player must give everything on the field, stay positive and have energy from start to finish. Players are helped to become competitive both in practices and in tournaments.

“If they haven't run the balls to the second bounce or they haven't given their all on the field, we don't give feedback on the tennis. It's not worth it to us. Anyway, players often know it themselves. »

At his age, Cayer could take a golden retirement. It's not yet the case. The essence of tennis still flows through his veins.

“I am still passionate about what I do. It's not just the passion for tennis or coaching. It's the feeling of making a difference and helping players achieve their dreams.

“I'm happy to be able to help them have a great career in tennis and even to have the opportunity to win grand slams and to have a very high world ranking. »

Over the years, he has kept the same philosophy despite the arrival of the new generation of players.

“It is not so much an adaptation to athletes as an evolution that a coach must do. In the past, it was very directive. It was normal. Now, if you're too directive, you look like a bully.

“Now I manage to influence them in another way. I give them the choice. It is important that the coach does not appropriate the emotion. It has more of a role of empowerment and support. »

His contribution to British tennis has been recognized over the past few months.

Last December he received an award from the association of journalists assigned to the coverage of tennis. He was honored for his lifetime achievement at the British Tennis Federation (LTA). MBE.

“It's very prestigious in England and it's a great honor for me,” said Cayer. This is to highlight your contribution to the sport. I can now put the letters MBE next to my name. Not many people receive this honor. It's always good to be recognized. »

Louis Cayer will be at the National Bank Open this week. We could very well see a Briton get his hands on the title in doubles. If so, we can think that Louis Cayer will have had a say in this conquest.

The couple is happily ever after in England

In 2007, Louis Cayer had a good job with Tennis Canada. However, a certain Stella changed her life.

During the first years of their relationship, the Briton tried to live with her two teenagers in Cayer's residence in Saint-Sauveur. It was not conclusive.

At that point, Cayer was faced with a heartbreaking choice.

“I had to decide between two options: either end my relationship or follow her to London,” Cayer recalls. When I left Tennis Canada, it was not to work with another federation.

“It was to join a person who became my wife. Today, we have been together for 20 years. I can say that I made the best decision of my life. »

The arrival of Sébastien

Louis and Stella had a child together in 2011, the same year the two lovebirds got married. Sébastien, who turns 11 in September, has already made several trips due to his father's job.

“It's fantastic. He has already come with me to the US Open six times. He traveled a lot with me when possible. »

Louis Cayer spins the perfect happiness with his family in England. In the photo, we see him with his wife Stella, his stepchildren Christopher and Alexandra as well as his son Sébastien.

Over the past few years, Cayer has agreed with the British federation to travel four months less per year. The purpose of this change was to spend more time with his son.

For the tennis man, it became a priority.

For example , he will drive him to school every day. A privileged moment for the father and his son.

Cayer needed a few years to become a true Londoner.

“After 15 years in London, my ties with Quebec are a little weaker. Most of my family members died.

“It happened gradually. I removed the images in the background of my old house in Saint-Sauveur. Then I stopped watching Canadian games because they ended in the middle of the night. Finally, I stopped reading Quebec newspapers.

However, he is happy to return to Montreal for the tournament. He will be leading a few players in the doubles tournament.

“I can’t wait. It's always nice to see friends and family members again. It will be my pleasure to reconnect with Eugène Lapierre in particular. He intends to introduce his players to the city before the tournament. Cayer will possibly bring them to the Old Port and Mount Royal.