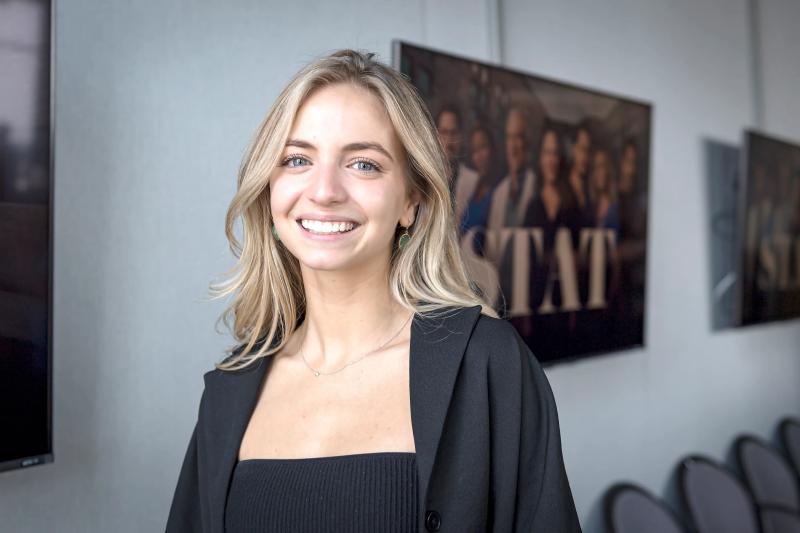 At 25, Ludivine Reding is the youngest actress in the main cast of STAT, the new daily series from ICI Télé.

“I'm going all out and I can't wait to see what it's going to give,” explains the one who freed up her schedule to dive 100% into this project.

“I must admit that 'at first, I was intimidated, explains the interpreter of the unforgettable Fanny in Fugueuse. The other actors are big names and I find them so impressive! Suzanne Clément is for me a leader in what she does and watching her work, I have so much to learn from that! Everyone, in fact. So, I take all of this for my personal baggage and I try to be a better actress.”

Apart from voice and dubbing contracts, the young actress now devotes herself entirely to this new series written by Marie-Andrée Labbé (also author of the series Sans rendez-vous). She plays Sophia, a young nurse her age (25), struggling with uniform syndrome.

“She really puts herself aside to help others, explains the actress who followed a triage nurse for a day to see how she interacted with patients. Sophia has a lot of personality and doesn't want people to pity her. She loves her job, is the best at what she does, but sometimes when you forget yourself, it catches up with you. That's kind of what we're going to address through this character.”

We will thus follow the daily life of each of the central characters in the series, living moments in the emergency room, taking care of patients , but living things in their personal life as well.

“It's so impressive to watch these people work, it's such a demanding job,” continues the actress. You see so many things in a day and you have to be able to put it all back when you get home. It is a human work, very enveloping. I tip my hat to them, that's why I would like to do a fair performance.”

Playing in a daily

In order to prepare for the adventure of filming a daily newspaper, Ludivine called Catherine Proulx-Lemay (the Florence of the District 31 series) to ask her for advice. She spoke of “a whole adventure and an experience that she loved” and insisted on the importance of arriving well prepared.

Sophia's interpreter also found a rehearsal – an actor friend – who helps him rehearse his lines for the coming week, which takes the burden of learning his lines in the evening for the next day.

“And my boyfriend helps me rehearse in the evening, all the time, she says, laughing. The daily life is a different rhythm, it's different and there was a moment of adaptation for me, but the shooting is going really well. It's going fast, it's happening in the emergency room so everything is going fast, you're in a rush all the time. But we are preparing a really good show!”

The STAT series is presented at 7 p.m. from Monday to Thursday on ICI Télé.