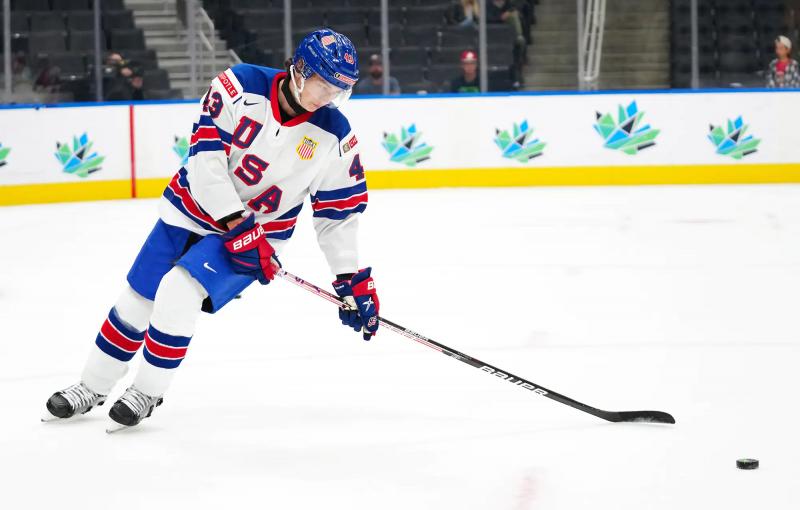 Jack and Quinn Hughes have often said that despite their success, it was their little brother, Luke, who was the best player in the family. If it is still much too early to say with certainty, we have to admit that the youngest of the family is on the right track to prove his brothers right.

The Devils' 2021 first-round pick, the fourth overall, Luke Hughes made history in his first NCAA season with the Michigan Wolverines, finishing with 17 goals and 39 points, two records for a first-timer. year in the American college ranks.

The defender particularly exploded in the second half of the season when a couple of Wolverines big names left to represent their side at the Beijing Olympics, including Owen Power.

“I think that it was above all a question of trust in my case. We had important games to win and I had to step up my game and take on a bigger role.

His teammate with the Wolverines last season, Thomas Bordeleau, was able to see the 6 2 in and 183 lb defenseman's progression in the game.

“He started playing with more attitude thinking he was going to do what he had to do and no matter what happened, that was how he played. I think he was averaging ten shots a game and he was doing everything on the ice. Before, he may have thought that since he had less ice time, he had to do something wow every time he got on the ice. There, he was on the ice more often and if he had a bad presence, he knew he was back on the ice in 90 seconds. It really helped him [sic] reach another level.

Hughes transposed this end of the season to Michigan at World Juniors, in Edmonton. In three games so far, including a 7-0 victory over the Austrians on Saturday, he has scored five points.

“He's playing with more composure and he's better defensively, in his reading of the danger and in his decisions with the puck. When we arrived at camp, there were four or five players who jumped out at us because they had really improved since Christmas and Luke was one of them,” said USA head coach Nate Leaman. /p>

Like the majority of other teams, the United States had to deal with the loss of several good elements who were from last December's edition, including their mainstay on defense Jake Sanderson.

A role that Hughes has filled since the start of the tournament, being the most used player with an average of 21 min 46 s per game, before Saturday's game.

“ Jake Sanderson was a bit our alpha male in defense. I think this year in the NHL people are going to be able to see how good he is. At Christmas, Luke had the chance to learn a little from him. I had also made a montage of the best moments of Jake that I wanted to show Luke just before the tournament was canceled. Now he's taken on that alpha role a bit with Brock Faber.”

Hughes says he learned a lot from his short time with the Senators prospect this past holiday season.

“There are a number of things about his game that I tries to replicate, including his confidence on the ice and the intensity with which he fights for the puck. He's been really good to me, he's a good guy and he's done a great job as captain.”

THE NHL WILL WAIT

Devils fans will have to wait another year before seeing the youngest of the Hughes brothers join Jack in New Jersey. The fullback decided to return to the University of Michigan for one final season before making the leap to pro.

“It wasn't a difficult decision for me. That was kind of the plan when the Devils drafted me. When I look at defenders like my brother [Quinn], Zach Werenski or Cale Makar, who played two years in the NCAA, I think that's a good avenue for me too. ”