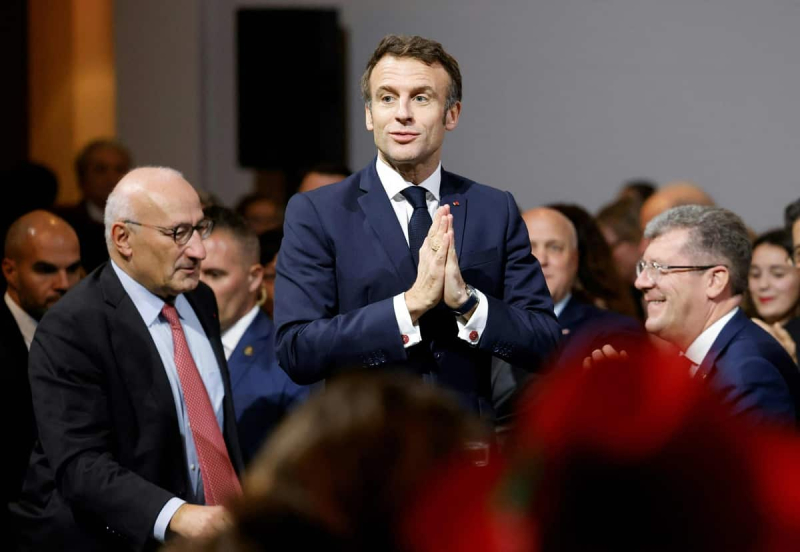 Emmanuel Macron claimed to have had a “clear and sincere discussion” in New Orleans on Friday with the new boss of Twitter Elon Musk, insisting that the social network make “efforts” in terms of transparency and “reinforcement of moderation. content”.

In a series of tweets, the French president also said he had discussed with the founder of Tesla “future green industrial projects, such as the production of electric vehicles and batteries”, without further ado. details.

In line with our ambition to decarbonize and reindustrialize France and Europe, I spoke today with @elonmusk on future green industrial projects, in particular on the manufacture of electric vehicles and batteries. pic.twitter.com/oMwcejKGx6

Elon Musk said in response “impatient” about “exciting projects in France”, without detailing them further.

It was an honor to see you again. Looking forward to exciting plans in France!

“I talk about it here on Twitter because that’s what it is about. This afternoon, I met Elon Musk and we had a clear and sincere discussion,” wrote Emmanuel Macron in French and English.

Emmanuel Macron claimed to have had a “clear and sincere discussion” in New Orleans on Friday with the new boss of Twitter Elon Musk, insisting that the social network make “efforts” in terms of transparency and “reinforcement of moderation. contents”.

The meeting, which lasted an hour, had not been previously announced by the Élysée, and was kept away from the media.

“Elon Musk has confirmed Twitter's participation in the Christchurch Call. Terrorist and violent content has no place anywhere”, detailed the French president, referring to an initiative launched by several States and NGOs in 2019, after the Christchurch massacre in New Zealand, the images of which remained accessible. online for several hours.

It was an honor to see you again. Looking forward to exciting plans in France!

The richest man in the world, already boss of Tesla and SpaceX (space shuttles), bought the end of October influential platform for 44 billion dollars.

His absolutist view of freedom of expression has many users, authorities and advertisers worried about an onslaught of hate and misinformation.

Elon Musk had initially promised a content moderation board responsible for all major decisions.

He himself finally decided to reinstate many accounts, starting with that of the ex-US President Donald Trump, banned after the Capitol stormed in January 2021.

He also put an end to the fight against false information linked to Covid, which is a “big problem”, according to Emmanuel Macron.

“I think we have to take the subject head on, I am in favor of the exact opposite, more regulation. We do it (in France, editor’s note) and we do it at the European level”, he declared Thursday during an interview granted to the chain ABC.

The Head of State insisted that freedom of expression “implies responsibilities and limits. You can't go out and make racist or anti-Semitic remarks, that's a point that I have to defend.”

“Let's be clear: there is still a lot of work to do” and Twitter will have to “significantly strengthen content moderation, protect freedom of expression and decisively tackle disinformation”, says the European Commissioner for the Internal Market , Thierry Breton, to Elon Musk on Wednesday, according to the report of a telephone exchange communicated in Brussels.

The new owner of Twitter has laid off more than half of the employees of the Californian group, and the content moderation teams have not been spared.

Always with tweets, he recently clarified his personal limits to freedom expression.

On Friday, the account of American rapper Kanye West was suspended for “incitement to violence”, in particular after the publication of admiring remarks for Hitler.

The libertarian entrepreneur also clarified that he would not allow far-right American conspirator Alex Jones to return to the platform, condemned for claiming that a massacre in a school was only a staging piloted by opponents of firearms.

Having experienced the death of his first child, Elon Musk explained that he was “without mercy towards anyone who would use the deaths of children to (make) gains financial, political or fame”.

Emmanuel Macron concluded his series of tweets with this statement: “We will work with Twitter to improve the protection of children online. Elon Musk confirmed it to me today. Let's better protect our children online!”

The president posted a photo of the two men around a table at the New Orleans Museum of Art, where he then gave a speech on the Francophonie at the end of a three-day state visit to the United States.