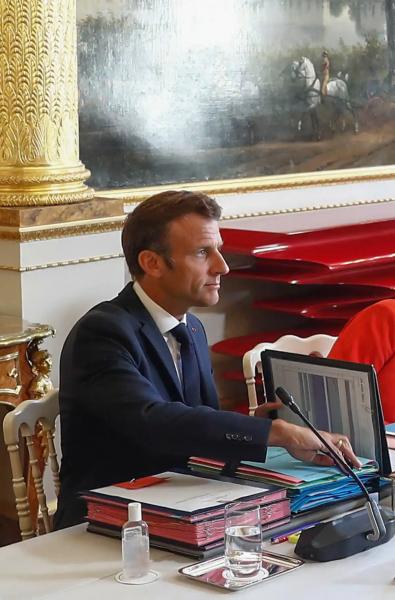 President Emmanuel Macron warned the French on Wednesday of “the big shift” which marks the start of the school year with “the end of abundance”, “obviousness” and “recklessness”.

“It's a big swing that we are going through,” warned the head of state, returning to the recent “series of serious crises”, from Ukraine to drought, in the preamble to the council of ministers back to Paris. .

“The moment we live in may seem to be structured by a series of serious crises (…) and it could be that some see our destiny as being perpetually to manage crises or emergencies. For my part, I believe that what we are going through is more of the order of a great shift or a great upheaval”, declared Emmanuel Macron during a speech before his ministers, exceptionally broadcast. /p>

While, faced with this situation, “our compatriots may react with great anxiety”, he called on the members of the government to “say things”, to “name them with great clarity and without catastrophism”.

“I expect the government to respect the word given and the commitments we have made to the nation,” he added.

“What I hope we can do in the coming weeks and months is to reaffirm a very strong unity of the government, of the forces of the majority” around “a course that will allow us to consolidate our sovereignty, our French and European independence”, he added.

Faced with “the rise of illiberal regimes” and “the strengthening of authoritarian regimes”, the president called on his ministers to “seriously”, to “credibility” and not to give in to the temptation of “demagoguery”.

“It is easy to promise anything and everything, sometimes to say anything and everything . Do not give in to these temptations, it is that of demagoguery. They flourish in all democracies today, in a complex and frightening world. It can always seem attractive to say what people want to hear (…) but you must first reason by asking yourself if it is effective and useful, “he added, without citing concrete examples. .