This Tuesday, June 21, 2022, Maëva Ghennam found herself at the heart of a big bad buzz. Salya, her mother, posted a photo on Snapchat in which we see the Marseillais star completely naked in the background. After appearing in tears in the story, Maëva explained herself in the company of her mother, but their explanations do not suit an Instagram account that has made reality TV tremble…

For a few days, a photo of Maëva Ghennam totally nude is doing the rounds of the web. On Tuesday, June 21, Salya, her mom, posted a selfie in the Snapchat story. Nothing too serious for the moment, but looking closer, we see the star of Marseillaistotally naked in the background. If his mother quickly deleted the photo, Internet users still had time to take screens. Maëva begged her fans not to share it, but the picture quickly went viral on Twitter and she found herself in TT for several hours.

“She didn't do it on purpose“

A little later, the two women finally explained themselves on the famous photo in a video posted in Maëva's story. “Listen, I'm better. I haven't slept very well and I had a stomach ache from what happened yesterday. I'm with my mother who hasn't done on purpose“, begins the ex of Greg Yega. “I did not do it on purpose. I was tired. You said to me: 'come on, let's go' and I posted without even looking. Frankly, there, I will never be caught again!“, justifies Salya, before her daughter adds: “She didn't do it on purpose. Well, it doesn't matter. Unfortunately, it's done. The bottom line was that people didn't share it (…) But people on the internet are too mean, they're too bad. The video made the rounds of France. Everyone shared,I'm disgusted, but hey, there's no turning back. It doesn't matter, it happens“.

A buzz programmed and poorly mastered?

But this explanation is not suitable for everything the world. Since Maëva Ghennam has been at war with a cousin, an Instagram account has shaken the small world of reality TV: @cousine.mg. In her story, she teases: “I explain for the photo. Balloon (Maëva Ghennam, Editor's note) wanted to make a huge buzz!His mother signed to arm long (Magali Berdah, Editor's note), but to increase partnerships, more views were needed. So she decided to create a scandal on her mother's snap. But basically, it was not supposed to be this photo“.

“She asked her mother to take a picture of her with her breasts up. She had to style to pass as if nothing was in front of the snap. She made several attempts. In the end, ball put it off and made his investments in a swimsuit. She said to her mother: 'you're useless, a false bad buzz, you don't know how to do'. Her mother wanted to help her and created the scandal that her daughter wanted. So she took the picture. But they took it so much that her mother, with the stress and insults of her daughter, posted the photo without realizing that she was also naked from the bottom“, accuses the account. 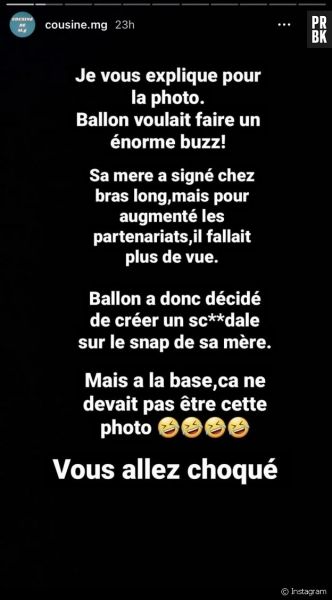 According to the account @cousine.mg, it was Maëva Ghennam and her mother who wanted to create the bad buzz, but they would not have controlled it.

“So it was just supposed to be a buzz, but it went wrong! Why do you think they wanted to do that? Her mom's views are very low, she doesn't post never anything interesting. So ballon made it clear that his mother posted without doing it on purpose, so that everyone watches his snaps every day hoping for a scandal. Do you understand their vice? people go watch every day hoping for a faux pas. It gets views, it increases ads” concludes @cousine.mg.

It's hard to know who is telling the truth… And you, which version do you believe?