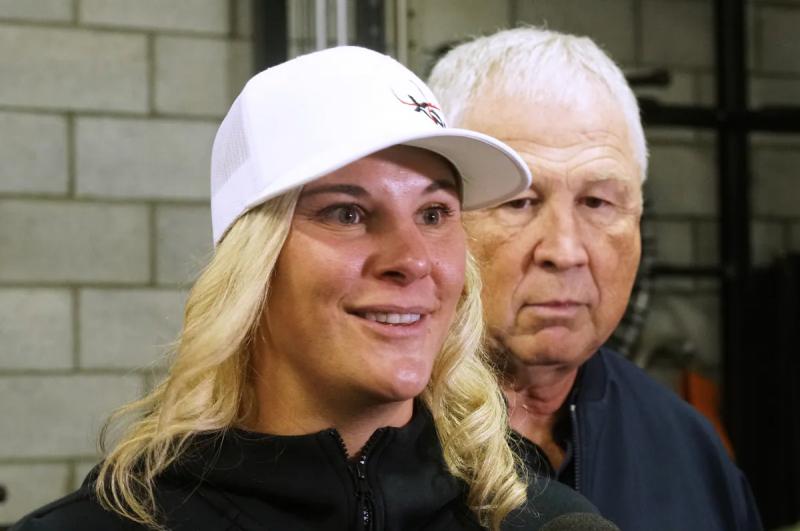 Marie-Ève ​​Dicaire will head into training camp for her second unification fight full of confidence, believing she can use her loss to Claressa Shields last year to her advantage.< /strong>

The Quebecer will travel to Manchester, UK, to cross swords with local favorite Natasha Jonas on November 12. The IBF, WBC, WBO and The Ring titles will be on the line. His clan expects to be shouted down, but the experience in Flint, Michigan has certainly prepared him.

There will also be a world of difference between these two fights. Her first attempt at unification, she experienced it in the company of Yvon Michel and Stéphan Larouche only because of travel restrictions. This time, she will travel to England a week before the meeting, and she will do so with her whole team.

“We always say it: when we have experienced it once, we are always better equipped to face the situation the next time, launched with aplomb Dicaire during a press conference, Thursday in Boisbriand. I think it was a forgotten passage, but I'm going on this great adventure with all my ammunition.

Groupe Yvon Michel (GYM) has seen several of its foals lose important fights in the United Kingdom. This time, he made sure to get fair treatment since there will be a British judge, another Canadian and a final one from a third country.

The champion will still have to prepare mentally to everything that will surround the fight since she will be the enemy, the day of the confrontation.

“For boxers, when the time comes to walk into the ring, some will be intimidated, but I know that Marie is the type of boxer who will feed off of that energy”, however advanced the coach Samuel Décarie-Drolet.

Inactive since winning back her IBF title against Cynthia Lozano last December, the Quebecer has indicated that she took her time to recover well from the injuries that afflicted her during her last fights.

“We knew we needed that time to get back on my feet and to give the best version of myself in the most significant fights of my career,” she explained.

Called on to compare Shields and Jonas, Dicaire said it will be a whole different challenge. Indeed, Shields went down a category when she crossed swords with Dicaire, while Jonas is more used to evolving in lower weight categories.

“It's two completely different challenges, she argued. Jonas is a left-handed boxer. She usually fights in a lower weight class, so maybe a little bit more speed, maybe a little less physical strength.”

Either way, Dicaire will be ready . She hopes to realize a dream by unifying the belts, and to do so in a city with a rich history of boxing like Manchester, the height of happiness.

“A little girl from Saint-Eustache, who left a little out of nowhere, who is going to box in the main event in Manchester for four belts… Me, that speaks to me!”