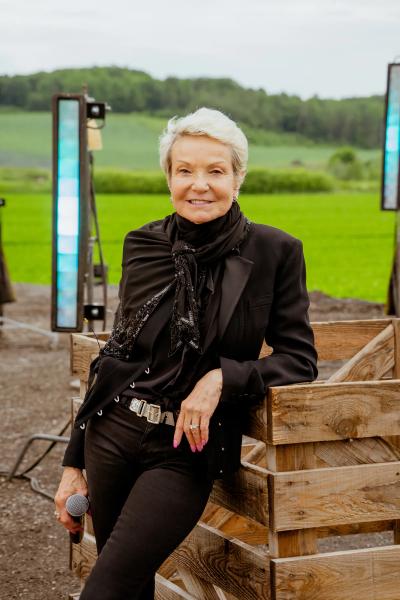 Just a few months before taking a leap into the void, Marjo says she is ready to take on the role of coach for the new season of “The Voice”, although there is still a big part unknown that awaits her.

In an interview with QMI Agency, the singer-songwriter admitted that it was still a little difficult for her to anticipating all that this new challenge would ask of her and bring back, but that she would dive into the adventure — head first — anyway.

“It's new to me. I've never had a role like this, but I'm going to live it! I still have 46 years of stage experience, studio, writing, and everything that encompasses the profession that I do, so I don't think I'm going to swim in nothingness, “he said. she indicated.

The rocker to whom we owe the radio hits “J'lâche pas”, “Ailleurs”, “Chats sauvage”, and the undisputed anthem “Provocante” has moreover confessed n 've never been too much of a visualization type or creating expectations for new projects. She moves on, and that's it.

“I'm getting into something that I don't know, but I agree to go there and I accepted it out of pure challenge. For the experience that it will bring me to live all this with people who want to sing and who want to make it their job, ”she explained, among other things.

It is also an opportunity for her to experiment with new working methods. “The artists, we work a lot solo, there it is another pair of sleeves; we will work as a gang! I think I will perfect my personality through all this and learn to work in a team and to share better,” she added.

“I can't wait to see what I'm going to flip my chair for,” she then said with a laugh, specifying that she wasn't necessarily looking for a particular musical genre or a certain type of voice. Above all, she intends to rely on what she will hear during the blind auditions, without however hiding her desire to spread a little good old rock with a Raven and Offenbach flavor. “It would be nice to hear some who get a little hoarse. Which shows us that they have a little chest in there”.

After nearly half a century of career, the secret of longevity according to the singer — who is today one of the monuments of Quebec music — is found in endurance, perseverance and rest.

Now living surrounded by forests at the top of a mountain in Saint-Sauveur in the Laurentians, it is in the north that Marjolène Morin finds the tranquility necessary for artists, she confided.

The one who gets up every morning at 5 a.m. — like her dad, who was also a morning person — will also be on Monday at “La belle tour” for the Laurentides special, to talk about it.< /p>

“In the morning the head is free. No worries. We are fine. We do what we want to do,” said the gardening lover who can often be seen with both hands in her flowerbeds and flowers, improving her flowerbed and “putting it nice and clean.

The episode of “La belle tour” on the Laurentians will be broadcast this Monday on TVA, starting at 8 p.m., while “La Voix” will be back in January, with Charles Lafortune at animation.