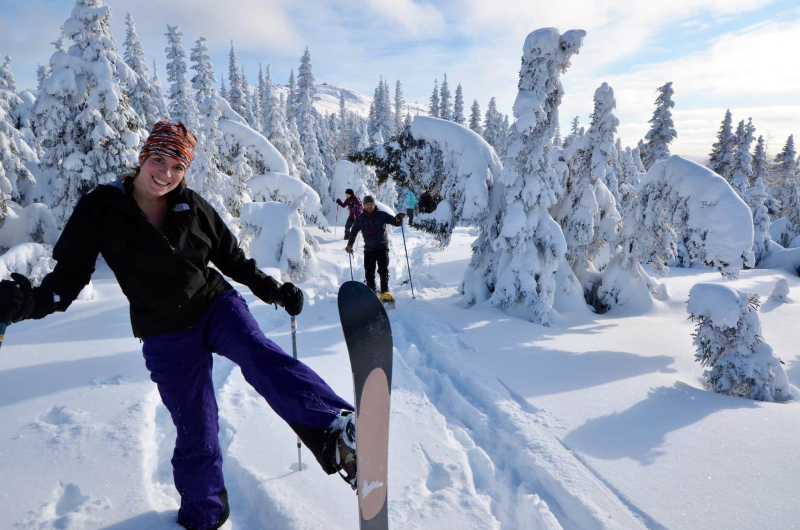 If we put on skis and snowshoes, our winter playground will expand! Outdoor enthusiasts finally dare to venture off the marked trails, because these skis facilitate their movement on the snow, both during ascents and descents.

We recognize the ski-snowshoe by its wider shape at the extremities and narrower in the center as well as by its integrated climbing skin, made of nylon and mohair – the first facilitates climbing and the second promotes sliding.

< p>In addition, the ski-shoe is slightly cambered to better support the skins on the ground and obtain the desired effect.

“When the skis slide on the snow during the descent, you can experience magical sensations and the sting “, underlines Pierre Langlois, co-owner of AMC Plein Air, a company specializing in ski-snowshoe outings and the sale of these.

That's how that snowshoeing encourages adventurers, children and adults, lovers of hiking and sliding sports, to explore different territories by adopting the telemark position.

Compared to cross-country skiing and alpine skiing , which require a particular boot, ski-snowshoeing is practiced wearing winter boots according to which the bindings are adjusted.

Several people can therefore use the same pair of skis, with their own boots . This is ideal for initiating the visit to this sport during a getaway to the chalet.

To choose the right pair of skis- snowshoes, it is important to take into consideration several factors, including its size and weight to obtain good flotation while being able to crush the ski to make it stick to the snow when necessary.

The typography of the terrain you want to cover and the level of sliding you want to achieve will also guide buyers towards the right choice, with the help of an advisor.