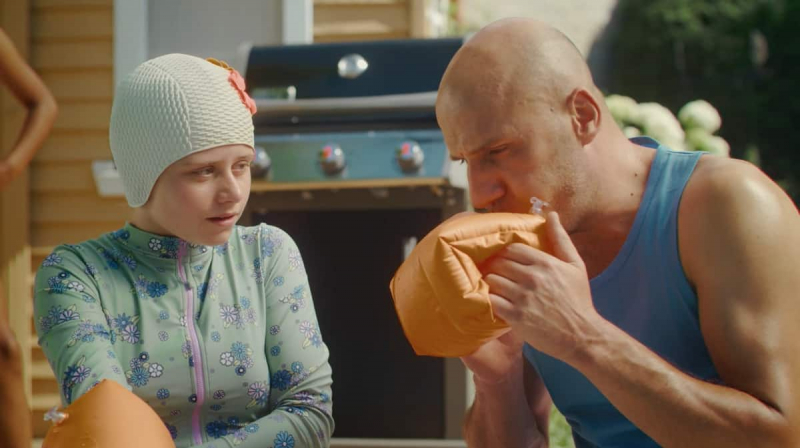 The black fiction “Martine à la plage”, adapted from the eponymous novel by Simon Boulerice, depicts the amorous obsession of a teenager for her new optometrist neighbor.

Martine Racra (promising Gabrielle B. Thuot), 14, is bored to death at the start of the summer holidays, she who has an overflowing imagination. Her father is taken up with work and her mother died five years earlier.

As soon as she meets Gilbert (Jean-Moïse Martin), the father who settles with his family in the neighboring , it's love at first sight for Martine. Little by little, she interferes in the life of Gilbert and his wife Chantal (Marie-Évelyne Lessard), enjoying their swimming pool and becoming the guardian of their little Chloé (Emma Lafrenière).

Of course, this interest in this mature man is one-sided, but Martine sinks into her delirium, which sends shivers down her spine, the young woman going far. Too far. In adolescence, many young people can project themselves into the arms of an adult, without becoming crazy. She will even try to damage her vision. Martine's intensity, coupled with her intelligence and her great fragility, make it more of a psychologist than she needs.

Martine plays Ouija, talks to spirits and Candyman, in addition to being helped in her plans by Jayne Mansfield, who died like her mother in a tragic car accident, and by Karen Carpenter, the leader of The Carpenters who died in anorexia in 1983. These ghosts of the past are added to a lot of retro accessories in the web series, like old flowery lounge chairs or one-piece bathing suits. We love the direction, the screenplay and the music.

Produced by KOTV, the eight short episodes of this psychological comedy/thriller are directed by Christian Lalumière (“Lost Melodies”), who wrote the screenplay with Simon Boulerice (“Chouchou”, “Six degrees”, “Géolocaliser l'amour”). They have been available since Thursday in the VERO.TV section of ICI TOU.TV EXTRA.

“Martine à la plage” also stars Stéphane Breton, Victoria Diamond and Monika Pilon. As he often does in his projects, Simon Boulerice entrusts himself with a role. This time, he makes a whirlwind appearance as a school crossing guard.