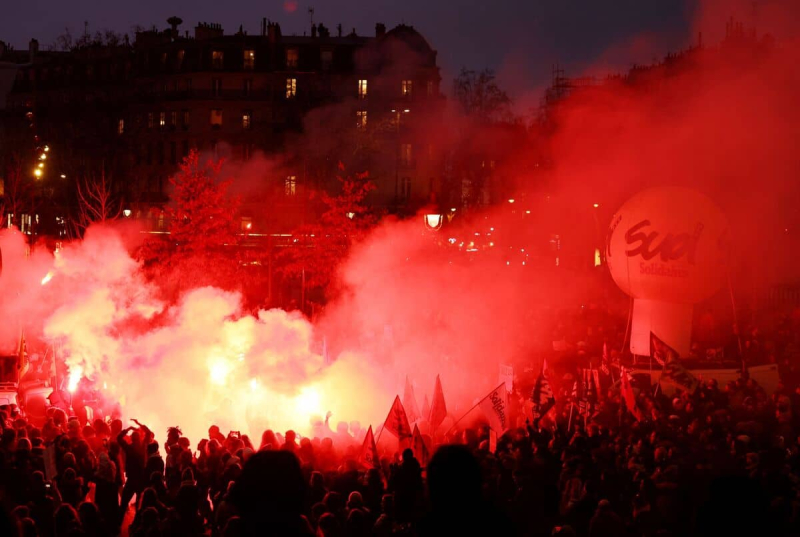 Hundreds of thousands of demonstrators marching across the country, very disrupted transport on the rail network and in Paris, closed schools: France faces a day of massive strike on Thursday against the pension reform project , a political test for President Emmanuel Macron in a tense economic and social context.

The project and its flagship measure, the postponement of the retirement age to 64, against 62 today, comes up against a united trade union front and widespread hostility in public opinion according to the polls.

The unions have already hailed a “successful” mobilization on Thursday afternoon.

“Emmanuel Macron, he would like us to die on the ground, that we work until the age of 64, ”says AFP Hamidou, 43, garbage collector from the city of Paris met in the demonstration. “We get up very early. There are some of my colleagues who get up at 3 in the morning. Working until 64 is frankly too much,” he says.

Further on, a young woman holds up a sign: “retirement before arthritis”. Other signs proclaim “Metro, job, tomb” or “Metro, job, vault”.

Protesters pounded the pavement Thursday morning in many French cities, before the Parisian procession set off around 1:15 p.m. GMT to say “no” to the decline in the legal retirement age. Clashes erupted Thursday afternoon between police and demonstrators around the Place de la Bastille in Paris, with the throwing of projectiles and the use of tear gas, noted an AFP journalist.

In Paris, some 400,000 people demonstrated, the CGT union told AFP, while the authorities' figure was not immediately available.

The mobilization “is beyond what 'we thought', welcomed the number one of the CFDT union, Laurent Berger, at the start of the Paris demonstration.

In Marseille (south), Jérôme Thevenin, a 52-year-old cook with a “chopped” career, worked for a long time as a seasonal worker. “I don't even dare to do the math to know when I can leave. But I see retirement approaching and I feel more concerned,” he said, hoping that the mobilization “will make the government think.”

Anticipating a “troublesome Thursday”, the Minister Delegate Transport, Clément Beaune, called for postponing travel or teleworking, a practice that has spread widely in France since confinement to stem COVID in 2020.

The agents of the public electricity company EDF have cut electricity production, reaching at least the equivalent of twice the consumption of Paris.

As for the refineries, the CGT TotalEnergies counted between 70 and 100% of strikers, on most of the group's sites.

The strike was very popular in transport with almost no regional trains, few high-speed trains (TGV), a metro idling in Paris and a very underserved large suburb.

There was no traffic at the port of Calais, the first in France for travellers, due to a strike by port officers.

Many public services are subject to calls for strike, especially in education, where the main union, the FSU, counts 70% of striking teachers in schools and 65% in colleges and high schools.

Emmanuel Macron, whose pension reform is a crucial project of the second five-year term, for which he had committed himself from the campaign for his first term, plays big: his party, which does not have a majority in the National Assembly , could be weakened if the movement were deep and lasting.

This political test for the president – who stays out of the fray and sends Prime Minister Élisabeth Borne to the front line – comes in an economic and social tension.

The French are suffering the effects of high inflation, at 5.2% on average in 2022, in a country which was shaken during the first term of Emmanuel Macron by the demonstrations of the “Yellow Vests” against the high cost of living.

France is one of the European countries where the legal retirement age is the lowest, without the pension systems being completely comparable.

The government has chosen to extend working hours to meet the financial deterioration of pension funds and the aging of the population. He defends his project by presenting it as a “conveyor of social progress”, in particular by upgrading small pensions.