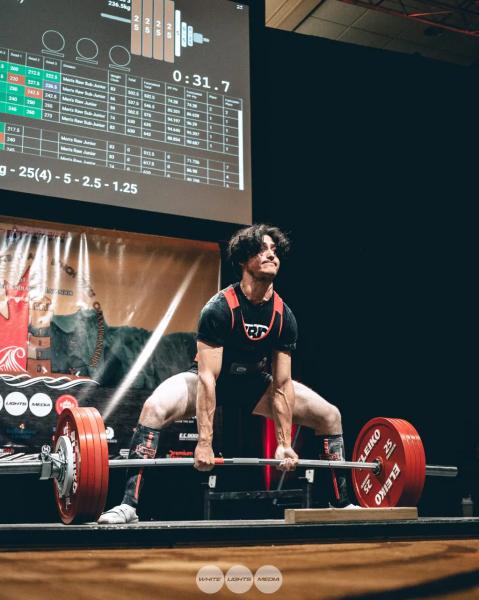 Introduced to a little-known sport less than two years ago, Mathis Jolicoeur is climbing the ranks at a breakneck pace and will take part in the World Junior Powerlifting Championship in September, in Turkey, in what will only be his third career competition.

The Fédération québécoise de dynamophilie (FQD) has 300 members. A discipline that resembles weightlifting in some ways, but which is not part of the Olympic family, powerlifting has three movements: the bench press, the deadlift and the squat. /p>

“From the age of 15, I did bodybuilding to develop my muscular strength, says the student in natural sciences at Cégep Maisonneuve. I started powerlifting a little less than two years ago with a friend who was already practicing this sport.

Jolicoeur says he dabbled in weightlifting and crossfit before focusing solely on powerlifting.
“The three movements hooked me,” he explains. These are popular moves in gyms and are the moves that I love the most. These three moves have always been in my workout routines and that's why I got the bug.

While the pandemic was a major obstacle for many young athletes, it served as a springboard for Jolicoeur, even if he had to show some imagination.

“My boyfriend (Henri Piquette) bought equipment and we trained in his room with his parents. He moved into an apartment and training continued. I now train in the basement at my house, next to my bedroom.

Due to the pandemic, several competitions were canceled, and Jolicoeur had to wait before making his debut. Due to the cancellations, however, he was allowed to take part in the provincial championship without having to go through regional events.

First competition, first victory. His Quebec title in his pocket, he took part in the nationals last May in St. John's in the under 66 kg category, where he signed a second victory.

“I was really surprised to win the national championship, he admits. I was impressed by the level when I arrived in Newfoundland. I established two provincial brands. Depending on my age and my weight category, I then understood that I had a good level and it clicked that I could continue at a higher level. »

In total for the three lifts, he lifted 537.5 kg and 187.5 kg in the squat, which is two provincial marks in his age group and weight category. He attempted to set a national deadlift record, but missed his third and final attempt when he passed out.

Where does this strength come from? “I've never been strong, but I've always wanted to develop muscle strength,” he says. I went to the gym to develop my muscular strength and not [for] aesthetic reasons like many. I also have the competitive spirit of my father, who was Canadian champion in judo for a few years before an injury forced him to stop his career. He is always present at my competitions and he will travel to Istanbul. »

If the expenses of his new personal trainer Jimmy Willard, who will be in charge of the Canadian team in Turkey, will be paid, Jolicoeur, him, must show imagination to finance his trip since the Canadian Powerlifting Union only pays for the equipment.