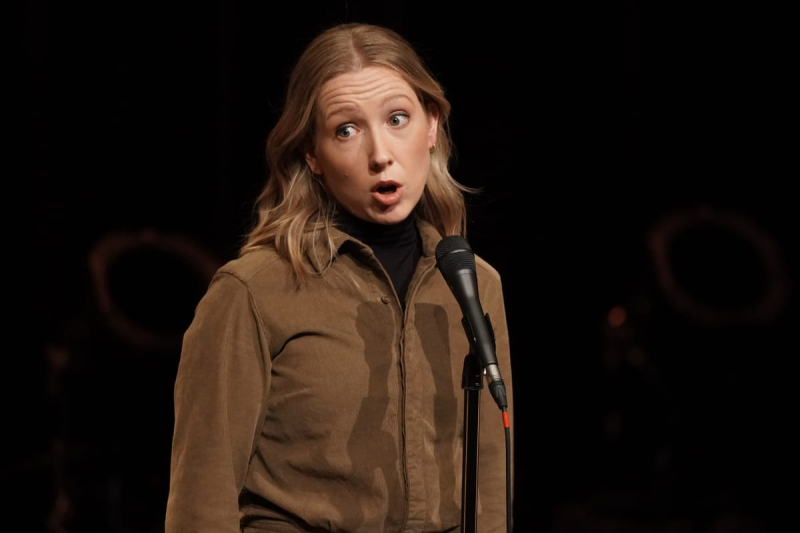 She doesn't speak loudly, doesn't move a lot of air and looks younger than her age, but she “punches” as loudly as her idol Georges St-Pierre; Maude Landry presented, Tuesday evening in Montreal, her excellent show “Involution”.

She also arrived on stage with panache, in a cascade of rolling-rolling on the occasion of her media premiere at the Gésù. An expected event that the comedian has been pushing back since the start of the pandemic.

With self-mockery and a style of her own – in which she masters all every aspect – a mixture of traditional observational stand-up, tinged with the absurd, philosophy, fine intelligence and song, the 31-year-old comedian was solid and surprising.

Covering a wide range of topics such as self-esteem – a winding road that has not always been easy for her –, mental health (borderline personality disorder, anxiety, obsessive-compulsive disorder), sleep, fear to grow old, and the bag of flour – “the worst bag for flour: you want a cup, well no, it's everywhere in your kitchen” – the comedian always finds a way to conclude his jokes in the unexpected, earning audience laughter every time.

Probably happy to be on stage on Tuesday evening, Maude Landry also had a lot of fun with the room, in which there were peers, part of the artistic elite and people from the public. Very skilful in his hazards to the crowd (“crowd work”), the comedian has never refused an invitation to get wet, and it has served him well.

Halfway through the show, the comedian offered a successful musical interlude. Accompanying herself on acoustic guitar, Maude Landry offered three songs – veritable earworms – of her own, including “La Unicorn Sans Corne” to which the audience laughed, sang and applauded.

Although this is his first solo show, the comedian has been rolling his balls for several years now, already holding two Oliviers (discovery and humorous capsule on the radio). We were also able to see her on “Info, sex and lies” or hear her on “The evening is (still) young”.

The staging, signed by Guillaume Lambert, perfectly completed the personality of the artist and served the purpose with accuracy. She gave the impression of being in her parents' basement.

The comedian who in the past provided the first parts of Adib Alkhalidey and Louis T. this time entrusted the warming up her room to the excellent – ​​and very funny – rock magician Nicolas Gignac.

Maude Landry will present “Involution” at the Cabaret du Lion d'Or until June with a few stops in Quebec, including the premiere is scheduled for February 22 at the Grand Théâtre. For all dates: https://maudelandry.com/#tickets