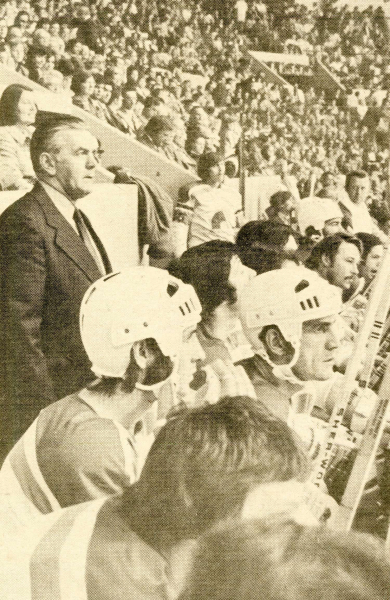 What initially seemed like a stroke of genius soon turned out to be a failure for the young Nordiques organization. Because despite his glorious career, despite the admiration that each of his players had for him, Maurice Richard did not have the flame of a head coach in him.

And that, the team realized this from training camp, where the legendary number 9 was conspicuous by his absence, retained in Russia by the famous Series of the Century. He accompanied hockey fans there.

“I was coming out of the junior ranks. When I arrived in Quebec, the first thing that struck me was that I was very excited at the idea of ​​working with Maurice Richard. But at the camp, he wasn't even there. It was funny…” says former goaltender Richard Brodeur.

“Maurice Richard was my idol. It was almost surreal to have him as a coach. But he wasn't at camp, so he wasn't prepared. When he joined us, he didn’t know any players,” recalls former striker Michel Parizeau.

In the absence of Maurice Richard, it is Maurice Filion who leads the first training camp in the history of the Nordiques. To help the head coach, Filion will even go so far as to compose the lines and give them to him on a piece of paper before the first match.

Back in Quebec just a few days before the historic game against the Crusaders in Cleveland on October 11, 1972, Richard carefully followed the list concocted by Filion throughout this first game. And this, even when the situation on the ice does not lend itself to it.

“When I saw him behind the bench in Cleveland, I noticed that he was helped to handle his lines. I said to myself that it was not his place or his way of life,” points out Claude Bédard, former sports director of the Journal de Québec.

“He liked his activities and loneliness. He was an unforgettable player, but being a coach was not him, ”he adds.

It was with great fanfare that the Nordiques presented Maurice Richard to supporters in the Quebec City region.

On July 11, 1972, the legendary Canadiens forward was invited to perform the ceremonial pitch before the baseball game des Carnavals, at the Municipal Stadium, in front of some 6,000 spectators in the stands who came to cheer him on.

Such a positive response from the crowd should not come as a surprise, but at the time there were tensions between the “Rocket” and the hockey fans of the “Old Capital”.

Even before the birth of the Nordic, Richard had lived through the horrors of the Quebec-Montreal rivalry. One of his sons had been booed during the Pee-Wee Tournament a few years earlier.

His younger brother Henri had also been heckled during a visit by the Canadian junior to the Coliseum, a place that Maurice Richard described it as a place of “fanaticism and ignorance of the game of hockey” in one of his columns for the weekly Samedi-Dimanche.

This positive reception from the Quebec crowd takes number 9 by surprise. On July 27, he initialed the Nordiques head coach contract at Quebec City Hall, in the presence of Mayor Gilles Lamontagne.

Richard does not have a long-term agreement with the crew. He prefers one-season pacts, let Claude Bédard know in an article he signed that day. His salary “corresponds to the income of his best years in hockey”, can we also read.

The Canadian and Lucille

At this time, Maurice Richard was almost 51 years old. He hung up his skates 12 years ago. The Canadian, the team he helped make a legend, never offered him such a position.

“He should not have made the commitment to come and lead the Nordiques because he was never convinced. It was under pressure from his wife [Lucille], who was very angry with the Canadiens, that he decided to come to Quebec,” says Claude Bédard.

“He wasn't cut out for it and he knew it,” he says. I had played golf with him before and soon found that his temper didn't fit with a lot of things. He was very strict and demanding of himself. Imagine with others! Except that behind a bench, you better pound on your pride…”

The adventure will finally last the time of two matches. On October 13, after the inaugural meeting at the Coliseum and despite the Nordiques' 6-0 victory over the Alberta Oilers, Maurice Richard faced the facts: great players do not necessarily make great coaches.

“The next day, he was in his car for Montreal and he never returned to Quebec,” recalls Claude Bédard.

Filion will take his place behind the bench for the rest of this first campaign.

“It was a good marketing move, but for us, it was sad to see that, regrets Richard Brodeur. We were wondering where this was going. »

– With the collaboration of Stéphane Cadorette

A trainer quickly overtaken by events&nbsp ;

Maurice Richard was discouraged after his first game at the helm of the Nordiques.

“I scored544 NHL goals. It's the first time in my life that I've seen a club play 60 minutes without touching the puck. Do you think I find that funny? he told journalists Claude Bédard and Claude Larochelle, a few hours after this 2-0 loss against the Crusaders.

It took the two men a long search to find the coach- leader after the meeting. Journalists from all over came to Cleveland to witness the debut of the “Rocket” behind the bench of a hockey team.

But after the game, it was impossible to find Richard in the old Cleveland Arena.

“Everyone wanted to talk to Maurice Richard, who had just coached the first game of his life. Except that Maurice was not there. Faded away ! says Mr. Bédard, who was then director of the sports pages of the Journal de Québec.

“When we got back to the hotel, we saw Maurice hiding in the back, in darkness, with a beer in front of him, behind a big column. When he saw us, he said, “What are you doing here?” continues Claude Bédard.

It must be said that the Nordiques of 1972-1973 were far from having in their ranks players as prestigious as those who made the golden years of the Canadian, at the time when Maurice Richard also wore the blue-white uniform- red.

There was of course defender Jean-Claude Tremblay, the ace of the new circuit on the blue line. But behind, there were very few players who had significant experience in professional hockey.

“We were a young team,” recalls former striker Robert Guindon, who himself was only 21 at the time.

“From the way he sent the players onto the ice, we could see that he was not prepared,” recalls Michel Parizeau, who later became a coach himself.

“And he was also not mentally prepared, he adds. I think he was not interested in the pressure that came with the coaching position. Because it's not enough to be behind the bench. You have to make your team work, you have to win. »

Indeed, the “Rocket” did not want to undergo such pressure. In the pages of the Journal de Québecof Monday, October 16, Claude Bédard writes: “For a week, Maurice Richard has not stopped repeating: “It’s incredible how I feel. I am literally dizzy with the tension that overwhelms me.” »

– With the collaboration of Stéphane Cadorette

Players had to raise their hands

Held away from Quebec during the Nordiques' training camp for the Series of the Century, Maurice Richard knew so little about the players who made up his team that he had to take attendance when he met them for the first time.

“I will always remember the first time he came into the bedroom. He named the players and we had to raise our hand to say: it's me. He didn't know what was going on,” recalls Richard Brodeur, who was then a very young goaltender.

Despite these funny memories or the lack of involvement of the “Rocket”, the Nordiques players to whom The Journal spoke are still honored, five decades later, to have been led by their “idol”.

“It was very impressive, recalls Réjean Giroux. Maurice Richard was the idol of Quebec. When he jumped on the ice, he skated more than us. We could see that the instinct of the player was still there.

A young striker in 1972, Giroux is undoubtedly one of the rare players to have been able to talk to the legend during his brief stint with the Nordiques.

“He loved me very much. After the first game in Cleveland, I sit on the plane and who comes next to me? Maurice Richard! I melted on the spot. He told me before leaving: “I see you working and I like what you do.” »

“I thought I was going to have a lot of ice time during the season… but he left after the next game”, regrets Giroux

Unfortunately for Giroux, indeed, but also for the young organization, which had just lost its first big headliner.

“The Nordiques were shaken when Maurice Richard left after two games. They counted on him to attract crowds. But deep down, [Richard] wasn't ready to lead a team,” said Jacques Moreau, the club's fixtures descriptor at the time.

“He was spectacular on the ice, and to see people who did not work as hard as him, who did not have the same ardor or the same sharp gaze, it hurt him, he believes. He was very honest to admit after two games that he would not have resisted all the pressure that awaited him. »

“It was not negative because he was a big name, and it was already a feat to bring him behind the bench”, adds Claude Bédard.

< p style="text-align:right;">– With the collaboration of Stéphane Cadorette