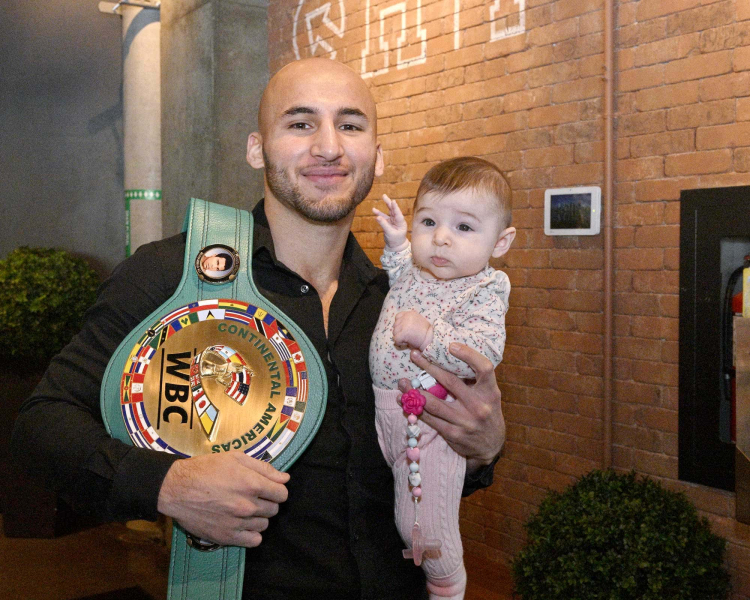 When choosing their daughter's first name, Mazlum Akdeniz and his wife opted for Evin, which means “love” in Kurdish.

“It's is especially my wife who hung on this first name and when the woman wants something, we have no choice but to obey, first joked the 25-year-old boxer, who is from the South Shore of Montreal . Now, I wouldn't change his first name, he's beautiful. It suits him really well. My daughter, it is a heart.

Listening to the interview, his friend Carine Trites smiled as she gazed at little Evine in her arms.

“She's a little angel, she's calm and kind,” Akdeniz continued. It is an additional motivation for me in my career. I fight for my daughter. I feel very good, I'm happy to have my daughter. She doesn't stop me from training, she sleeps through the night and I have a really caring wife. With these sweet words, a new smile appeared on the mother's face.

Undefeated in 17 professional fights, Akdeniz will fight in the semifinals on Friday at Place Bell, just before the unification fight between Kim Clavel and Mexican Yesica Nery Plata. Still unknown in the Belle Province, the boxer born in Turkey and who moved to Quebec at the age of 4 worked for a long time with the Ontario promoter Lee Baxter, before joining the Yvon Michel Group.

It was with GYM that he got his hands on his WBC Continental Americas title last June by beating Juan Antonio Rodriguez by unanimous decision of the judges at the Casino de Montréal.

About his opponent on Friday in Laval, Mexican Cristian Bielma (19-4-2, 7 KOs), it's his nickname “El Gato Gordo” that makes you smile because of the weight category , or the super-lightweights. Translation: “the big cat”, which is reminiscent of former Expos player Andrés Galarraga.

“His nickname made me laugh; I hope he will make the weight”, launched Akdeniz with humor, in anticipation of the weighing of the boxers which will be held on Thursday.

The fight between Akdeniz and El Gato Gordo, during which the Quebecer will defend his belt for the first time, is all the more important since it will be broadcast on the ESPN+ platform.

“Let there be 10 people watching or another million, I will deliver the performance, Akdeniz promised. I don't feel any pressure, but I still want to prove that I belong to the elite at 140 lbs. I would love to go for a nice knockout. “

” This fight will allow me to get even bigger fights this year, continued the boxer. I can't wait to become world champion. »

Akdeniz has more or less five years to reach the goal.

3 months old, little Èvine will then be about to go to school…

Boxer and new dad, Mazlum Akdeniz is also the owner a pizzeria, the Resto Royal 21, in Longueuil. He is supported by his father, who also manages the family business, Pizza Favoris.