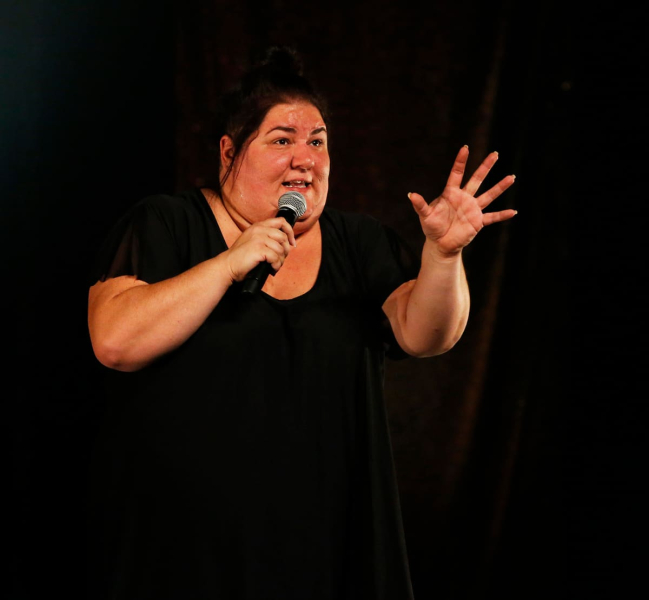 She speaks loudly, plays big and blasphemes without embarrassment, “and yet it's not Shakespeare”, warns Christine Morency from the outset, who was welcomed as a rock star on Wednesday evening, under thunderous applause between two columns of smoke, for its premiere at the Olympia.

“Tabarnak! I am you Céline!, she exclaimed. In any case, tonight, I have the health of Céline”, she said from the outset, her voice hoarse from laryngitis. The comedian also had to have the agreement of an ENT specialist during the day to be able to do his show without risk to his health.

A gifted storyteller, the comedian addresses some of the her misadventures, each one funnier and more unexpected than the next, and which have made her a lady full of grace – or almost. She talks about her stay at the Ritz, a “date” at the waterslides and the time she won a ticket to La Ronde – and where, since then, she owes a big candle to her crotch which allowed her to s cling to his seat, in the Tornado.

His colorful verve, his bloody punches and his clownish mimics are an added value to his stage character who definitely knows how to make people laugh without being vulgar – although sometimes it is a little. The Olympia public had little respite during this 90-minute presentation to catch their breath, as the jokes were flying.

It is obvious that Christine Morency has a way of her own – and very colorful – of bringing the public into her world and making them laugh out loud while making them think. This is particularly the case in her number – frankly successful – on sexual misconduct, which she concludes by underlining the aberration of having to make such a number to denounce these gestures. “I don't understand why I'm able to say 'no' to a sausage dog, but not to number 6 [a spectator in the room chooses to illustrate the man in six who will commit sexual misconduct at least once in his life ]”.

At a certain moment of his show, the few sections of golden curtain that dress the stage fell, revealing at the same time an installation of fans. “Well, that's me: big fans of the chain,” she exclaimed. She collects herself there on occasion to catch her breath or for the benefits of a gag. Light animations are also projected there at certain times, in particular a male attribute which completes a joke.

For the premiere of this first solo show, the energetic comedian was solid, although she had known a few shortness of breath here and there due to the illness that afflicted him.

The comedian documented the underside of the creation of his show “Grâce” in the documentary series “Christine Morency: without filter”, aired on Z every Wednesday. Crave subscribers also have access to the episodes.

Christine Morency will be back at the Olympia on Thursday and will continue her tour across Quebec for at least another year.