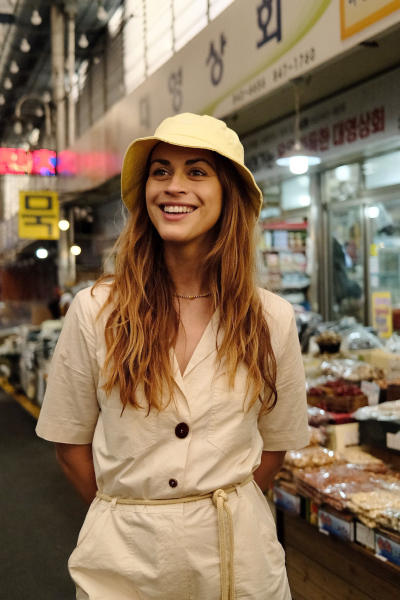 The new show Expat Chefs, hosted by Émilie Fournier on Zeste, invites us to meet expatriate Quebec chefs on the other side of the world. From local markets to the kitchens of their restaurants, the show explores the unusual and exotic daily life of these passionate, adventurers of the plate.

The first season of Expat Chefs leads us to meet six Quebec chefs, from the island of Dominica to Italy, via the Cayman Islands, Portugal, England and North Korea.

“Does it taste better somewhere else? Why this desire to emigrate? How much does it cost ? What are the associated administrative procedures? These are all questions I ask them,” says host Émilie Fournier, who we have seen on several TV shows, including Vlog and Salut Bonjour.

Here, two dishes concocted by two chefs that we meet in the Expat Chefs series.

Beyond culinary discoveries, Expat Chefsis a program resolutely centered on the human, says Émilie Fournier. “What struck me was the extent to which, even on the other side of the world, Quebecers have a way of approaching cuisine that is unique to them. The kitchen remains a gathering place, and the chefs have in common a meticulous and precise, warm and unpretentious way of cooking. They all reproduce that!

In one of the episodes of Expat Chefs, chef Stéphanie Audet leads us to the Lisbon market where she gets her fresh produce.

Viewers should feel great pride seeing these accomplishments, the host thinks. “Most of the chefs come in with their technique and soak up the local culture and ingredients. It makes for beautiful blends that people are curious to discover. We're having fun with this show! »