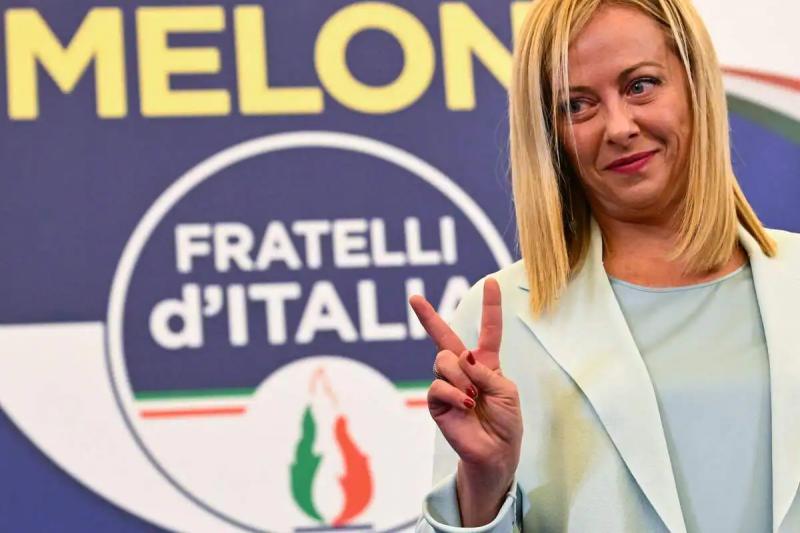 A period of uncertainty began Monday in Italy after the victory in the legislative elections of post-fascist Giorgia Meloni, at the helm of a divided coalition which will have to agree on a government before face the economic crisis in the face of a worried Europe and markets.

Armed with an absolute majority in Parliament, the leader of Fratelli d'Italia and her allies Matteo Salvini of the League (anti-immigration) and Silvio Berlusconi of Forza Italia (right) will discuss in the coming days with a view to forming a government, which will see the light of day no earlier than the end of October.

Ms Meloni won more than 26% of the vote in a context of record abstention (36%), and her coalition around 44%, which ensures her a majority in both chambers.

Giorgia Meloni, who should become at 45 the first post-fascist leader of a founding country of Europe, made a point of reassuring, both in Italy and abroad: “We will govern for all” the Italians, has she promised.

Words that carried over to crossed voters Monday in the streets of Rome. “You have to have confidence, first because she's a woman, and then because the speech she made was measured,” said Andrea Fogli, a sixty-year-old artist.

Below 9%, a score halved compared to 2018, Matteo Salvini is paying a high price for the League's participation in successive governments since 2018, but has ruled out resigning.

“With Giorgia we will speak today to reflect, quickly and well, on the next government”, he said.

“He will have a more marginal role than he would like in the formation of the government”, analyzed for AFP Sofia Ventura, professor of political science at the University of Bologna, excluding that he returns to the Ministry of Interior, where he had imposed an anti-immigrant policy.

Abroad, the French presidency assured respect the “democratic and sovereign choice” of the Italians, believing that “as neighboring countries and friends, we must continue to work together”.

Berlin, for its part, expects Italy to remain “very pro-Europe”.

US Foreign Minister Antony Blinken said the United States was “looking forward” to working with the new government while encouraging respect for human rights.

“We stand ready to salute any political force capable of overcoming the established mainstream full of hatred towards our country (…) and being more constructive in relations with our country,” Kremlin spokesman Dmitry Peskov said on the other hand. p>

Ms Meloni has received enthusiastic support from the pet peeves of Brussels, Poland and Hungary, as well as congratulations from Spain's far-right VOX party and France's National Rally (RN).

The boss of the Democratic Party (PD, main left party) Enrico Letta lamented “a sad day for Italy” and announced, after his disappointing result, that he would step down at the next party congress.

The new executive will succeed the cabinet of national unity led since January 2021 by Mario Draghi, the former head of the European Central Bank (ECB), called to the bedside of the third economy in the euro zone brought to its knees by the pandemic. /p>

Mr. Draghi had negotiated with Brussels the granting of nearly 200 billion euros in financial aid to Italy in exchange for deep economic and institutional reforms, a windfall which represents the lion's share of the European recovery plan.

Despite the stakes, several parties that had agreed to join his government (Fratelli d'Italia remained in opposition) ended up bringing him down this summer, leading to the calling of early legislative elections.

And while “Super Mario”, presented as the savior of the euro zone during the 2008 financial crisis, appeared as a guarantee of credibility in the eyes of its European partners, the coming to power of the nationalist, eurosceptic and sovereigntist extreme right raises fears of a new era of instability.

Especially since Italy, which is crumbling under a debt representing 150% of GDP, the highest ratio in the euro zone behind Greece, is experiencing a inflation of more than 9%, with gas and electricity bills putting households and businesses in difficulty.

Sign of persistent investor concerns about Italy's debt, the “spread”, c i.e. the closely watched gap between the German 10-year borrowing rate that makes t benchmark and that of Italy to ten years, climbed to 235 points on Monday, up 6.68%.