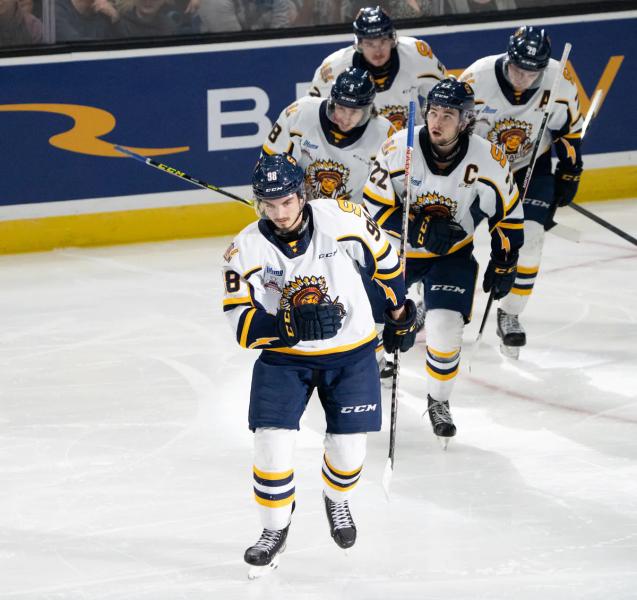 SAINT-JEAN, NB | We may have to stop saying that the Shawinigan Cataractes are neglected in the Memorial Cup tournament. Daniel Renaud's men won a second consecutive game on Thursday, this time against the Hamilton Bulldogs to ensure, at the very least, a participation in the semi-final next Monday.

Shawinigan hit through the muzzle of his guns by scoring his three goals on the power play while goaltender Antoine Coulombe kept the fort despite a barrage of 40 shots, including 19 in the first period alone.

“You see inspired performances, guys who are dedicated to their teammates, to their team and to a certain way of playing. We have such a united group that on our side, even if the noise outside was that we were neglected, we believed in us and we still believe in us, ”said assistant coach Pascal Dupuis, who came again to take over. to Daniel Renaud in front of the media because of the loss of voice that has been afflicting him for the past few days.

With two victories in regulation time, the Cataractes are now at the top of the tournament standings at the round with a total of six points. On Saturday, they will face the Saint John Sea Dogs in a game that will send one of the two teams directly to the Grand Final. The Cats will actually only need a single point to finish first and secure a spot in the Ultimate Game.

“That's what we want. We came here with the goal of winning every game. To be assured of a semi-final is a good thing, but we haven't finished our work yet,” added Mavrik Bourque.

The latter was once again the offensive catalyst for the Cataractes with Xavier Bourgault against the Bulldogs. Both first-round NHL picks were involved in all three of their goals, each recording a goal and two assists.

They first slowed down the momentum of the Bulldogs who, as one had to understand from a team having lost its first game, started the game on a high.

After Mason McTavish opened the scoring for Hamilton who dominated early in the game, Bourgault accepted Bourque's fine pass to tie the game. The opposite scenario happened before the end of the first frame when it was Bourgault who handed over to Bourque before the latter beat Marco Constantini with a powerful one-timer.

The Bulldogs tied the game at the end of the second then the power play was struck again for the Cats in the third.

Bourgault gave it to Bourque who immediately spotted Olivier Nadeau well placed in front of the net . The latter only had to push the puck into an empty net. The whole thing took only eight seconds.

This game had been drawn by Daniel Renaud and explained to the players just moments before the start of the power play.

“It's been a while since we've played this game. had changed Mav [Bourque] and [Pierrick] Dubé. We saw an opening on the video between the second and third and we made the change and it worked,” said Nadeau.

Even though the big guns of the Cataractes scored big goals with the advantage of a man, the scenario would probably have been different had it not been for the brilliance of goalkeeper Coulombe. In the first, he stood despite the insistence of the Bulldogs and the same thing at the end of the game when the Ontario champions tried everything to tie the game.

“He played a very big game, recognized Dupuis. He showed a lot of character. He made some big saves and got his hands on the puck when it was time. Looks like he was the one managing the pace of the game. »

For his part, Coulombe wanted to bounce back after the Cataractes decided to use Charles-Antoine Lavallée in the first match of the tournament.

« It's sure there's a competition between two goalies,” said the 19-year-old goaltender. Lavy and I have a good relationship but for sure not starting the tournament made me feel bad and I wanted to bounce back tonight. »

Friday's game will pit the Bulldogs against the Edmonton Oil Kings in a game that will decide the last team to advance to the semi-finals.