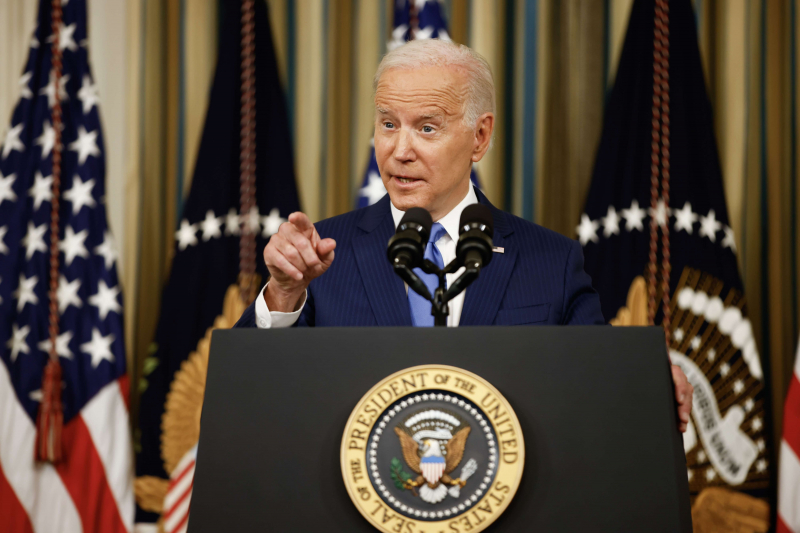 The midterm legislative elections represented “a good day for democracy”, welcomed President Joe Biden on Wednesday, whose Democratic camp limited the damage despite predictions that gave a wide advance to Republicans in the House of Representatives.

President Joe Biden hailed Wednesday a “good day for democracy” in the aftermath of the midterm elections, where his Democratic party resisted the announced Republican “wave”, even if he will probably have to face a House of Representatives in Conservative majority.

“We had an election yesterday. And it was a good day, I think, for democracy. And I think it was a good day for America,” the president said at a White House press conference, welcoming that the ballot took place “apparently without interference.”

He also repeated that he “intends” to run for a second term in 2024, specifying that he would confirm it “at the start of next year”.

While the final results of the elections are not yet still known, Joe Biden was visibly relishing the good performance of the Democrats and sending a message of firmness to the Republicans.

“While the press and experts predicted a giant red wave, it did not happen,” he said, referring to the color of the Republican Party, while acknowledging “the frustration” of many voters, in the face of inflation in particular.

Joe Biden was speaking the day after midterm elections in which his party limited damage in a vote traditionally difficult for the ruling party, which were seen as a test for his political future.

The Democratic leader said he was “ready to work with the Republican opposition”, claiming to be open to all “good ideas”, but he set several red lines on social security, abortion or even climate change.

Nearly 24 hours after the first polls closed, America was still waiting to know the fate of several decisive and hotly contested elections, such as in Arizona and Nevada.

But Republicans were well positioned to take control, albeit narrowly, of the House of Representatives, while the fate of the Senate remained up in the air.

Cautious, the American mainstream media were careful not to announce their projections for control of the 435 seats in the House of Representatives, the majority being at 218.

The “red wave” expected by the Republicans therefore did not take place, probably depriving Donald Trump of a springboard in his desire to regain the White House.< /p>

Silent all morning, the former president made a rare confession, acknowledging “somewhat disappointing” results on his social network Truth Social.

Many of his lieutenants were beaten. And one of his potential rivals for the Republican nomination, Florida Governor Ron DeSantis, 44, stole the show by being triumphantly re-elected.

Republican tenor Kevin McCarthy, who should in the event of victory become the next president of the lower house, succeeding Nancy Pelosi, assured him that his party would “take back the House of Representatives” on the night of Tuesday to Wednesday.< /p>

If the victory is confirmed, the Republicans have already announced the color: they will try to tear up Joe Biden's program and have promised to open investigations into his management of power.

The Senate goes into overtime

In the Senate, where the Democrats held a very slim majority before the election, it will surely be several days, if not weeks, before a majority emerges.

Arizona and Nevada were yet to be decided as of 10 p.m. GMT.

And in Georgia, as in 2020, voters will play overtime none of the candidates, Pastor Raphael Warnock, incumbent senator, and the former star of the American football Herschel Walker, having failed to pass the 50% of the vote mark.

A new ballot is already scheduled for December 6.

The Democrats snatched from the Republicans one of the most contested seats in this election, in Pennsylvania, won by John Fetterman.

Du on the side of the governors, after having taken two posts from the Republicans (in Maryland and Massachusetts), the Democratic camp had not said its last word either in Arizona, where the outcome of the race between the Trumpist Kari Lake, given favorite, and Democrat Katie Hobbs remained unknown.

In this state, technical problems were encountered, but the elections were not rigged, local authorities insisted on Wednesday.

In addition, the defenders of the right to abortion were delighted to having recorded “historic” victories, including in very conservative Kentucky, in referendums organized in the wake of the Supreme Court ruling in June.

Americans have “sent a clear and unambiguous that they want to preserve our democracy and protect the right to choose in this country,” President Biden stressed.