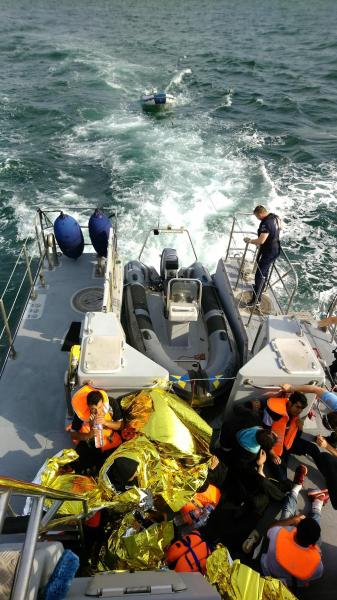 Nine men have been charged in France, in particular for “manslaughter”, and five of them imprisoned in the investigation into the sinking of migrants in the Channel which left 27 dead in November, a AFP learned on Friday from a judicial source.

“Nine men, aged 21 to 41” and presented to an investigating judge on Thursday, were charged “in particular with counts of manslaughter, involuntary injury, endangering the lives of others, criminal association and aid illegal entry, movement and residence,” said this judicial source.

“Five of them were placed in pre-trial detention and four under judicial supervision,” said she continued.

They are suspected, according to a source familiar with the matter, of being involved to varying degrees as drivers, smugglers or accommodation providers, particularly in an Afghan illegal immigration network linked to the sinking.

A tenth person had already been indicted and imprisoned on Wednesday in this judicial investigation.

In total, 15 people – 13 men and two women – had been arrested on Sunday and Monday, as announced by the daily ” Le Parisien” and RTL radio.

Five had been released without prosecution at this stage.

Twenty-seven migrants aged 7 to 46 – 16 Kurds from Iraq, one Kurd from Iran, 4 Afghans, 3 Ethiopians, one Somali, one Egyptian and one Vietnamese – died on November 24 in the sinking of their inflatable boat off Calais, as they attempted to reach Great Britain.

Only two passengers, an Iraqi Kurd and a Sudanese, were able to be rescued.

This shipwreck, the deadliest since migrants attempted to cross the Channel, had caused a stir in Europe and reignited tensions between France and the United Kingdom.

According to the Ministry of the Interior , attempts to illegally cross the Channel by migrants wanting to reach the British coast exploded in the first half of 2022, after an already record year in 2021.

In 2021, these attempted crossings , usually by inflatable boat, departing from the northern coast of France, between Calais and Dunkirk, had reached a “record”, with 52,000 people having attempted it and 28,000 migrants having succeeded, according to data from the Ministry of the Interior communicated in January.

According to the prefecture m aritime, a total of 38 migrants died in 2021 trying to reach England by sea from the northern coast of France, including 27 from the shipwreck of November 24.