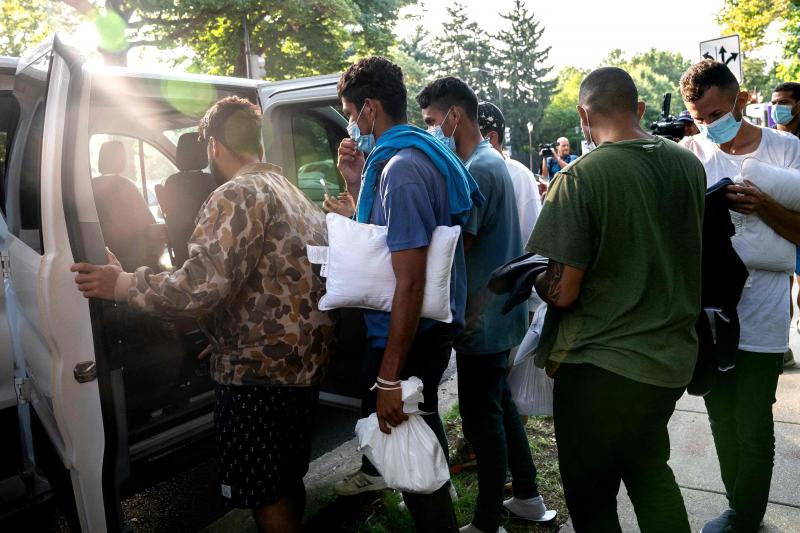 The fifty or so migrants sent to a posh island in the northeast of the United States, as part of a political battle over immigration, will be temporarily welcomed at a military base not far from there, the governor announced on Friday. from Massachusetts.

The migrants, mostly Venezuelans and including children, arrived Wednesday at Martha's Vineyard, a Democratic stronghold and popular vacation spot for the political elite. from the country. They had been put on flights from Texas, but which Republican Governor of Florida Ron DeSantis claims to have chartered.

Despite local mobilization to help new arrivals, the island “is not equipped to provide sustainable accommodation and state officials have developed a plan for a comprehensive humanitarian response,” said a statement from the services of the government. Massachusetts Governor Charlie Baker.

On Friday, the authorities offered these migrants “to transport them to a new temporary refuge” on the Joint Base Cape Cod. “Families will not be separated,” the statement said, noting that this base had previously served as an emergency shelter and that they would have access to care and legal services.

According to media reports locals, the migrants left Martha's Vineyard during the day.

Some of them said that when they left Texas, they didn't know they were going to be sent to an island.

Local Democrat MP Julian Cyr has called for an investigation.

Sending migrants to Democratic strongholds has become a political weapon for tenors of the American right to denounce the policy of President Joe Biden, whom they accuse of having transformed the border with Mexico into a sieve, and of trying to place immigration at the center of the election campaign mid-term, in November.

On Thursday, two buses carrying migrants arrived near the residence of Vice President Kamala Harris in Washington. A place chosen on purpose, the Democratic official being in charge of the explosive file of immigration at the White House. They had been sent by Texas Governor Greg Abbott.

The White House again criticized these methods on Friday, denouncing a “premeditated and cruel political staging”.

“They are children. They are moms. They were fleeing communism. And what did Governors DeSantis and Abbott do to them? They used them as political pawns, treating them like cattle,” said executive spokeswoman Karine Jean-Pierre.

Ron DeSantis joked about their transfer.

“By the way, they have already made them leave (the island) by bus (…). They said 'we want everyone, no one is illegal' and (the migrants) left in 48 hours” from Martha's Vineyard, he said.