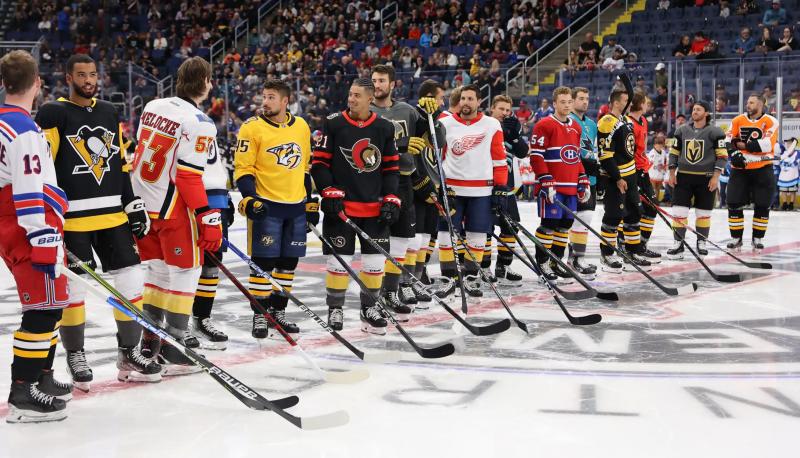 The 12th edition of Pro-Am Gagné-Bergeron, which was presented Tuesday evening at the Videotron Center, raised a sum $425,000 for four foundations that help children.

Le Pignon Bleu, Leucan, the Maurice Tanguay Foundation and the Philippe Boucher Foundation will share the sum. The amount raised is similar to that of the years 2018 and 2019, before the pandemic which had forced the cancellation of the last two editions.

“Having raised a sum like this, we have the feeling of having accomplished our duty. said the president of the organizing committee, Bruno Guay.

The latter believes that the twenty or so National Hockey League (NHL) players present offered one of the best shows for fans in the history of the event. Jack Eichel, Patrice Bergeron, Marc-André Fleury and Jonathan Huberdeau were there.

“If we had a line-up like that with the Quebec Nordiques, it wouldn't be a problem, but we would go way beyond payroll,” Bruno Guay noted with a laugh.

The president of the organizing committee insists on the respect that players on the Bettman circuit have for Patrice Bergeron, who has issued several invitations.

“My girlfriend told me that Bergeron reminds her of Guy Lafleur, since he is so respected in the league, and I agree, he said. Jack Eichel immediately accepted the invitation because of him […]. Patrice is generous, he has an aura, a reputation, and people respect him. Nobody wants to displease him.”

For the quality of the show, the number of amateurs present on the ice fell from 20 to 10 this year. They had to pay a sum of $10,000 to participate.

Marc Hamilton was participating in his fifth Pro-Am. In his eyes, the Pro-Am is a must. He took the opportunity to chat with the coach of his Pro-Am team, his childhood idol, Raymond Bourque.

“It was exceptional, it's really fun, said said the 49-year-old man. This is the edition where I had the most fun. There was a high quality of players. It was friendly and there was great respect. It is a great experience to see experts in their field. […] My heart was beating very fast on the ice, I wanted to follow the rhythm.”

“It cost us $10,000 for the amateurs, but I would have put that amount, even if I didn't have the pleasure of playing, added the microbiologist. These are important causes that we have been supporting for several years.”

He has already reserved his place for the next edition.