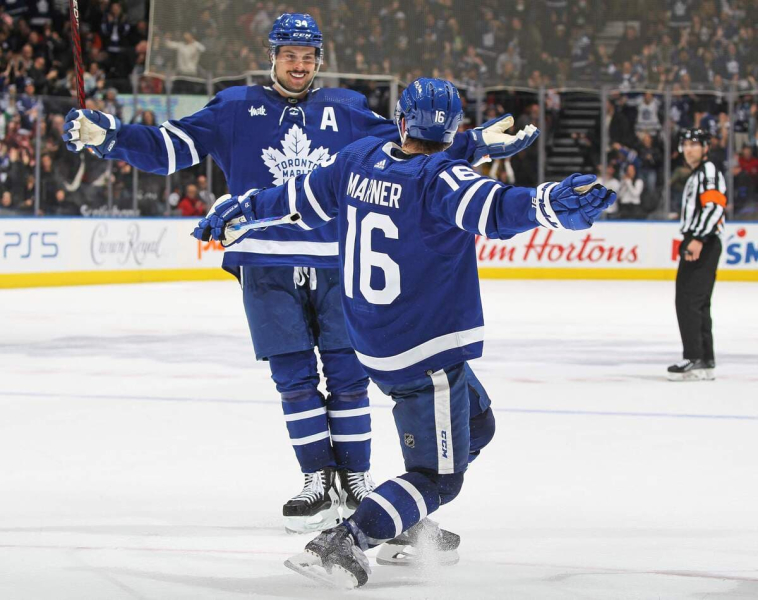 Mitch Marner extended his streak with at least one point at home to 20 in the Toronto Maple Leafs' 4-1 win over the Winnipeg Jets on Thursday at Scotiabank Arena.

The Leafs forward got the better of opposing goaltender Connor Hellebuyck after creating a turnover in the neutral zone in the second period, giving his side a three-goal lead.

The Jets' response came in the third period with Kyle Connor's goal.

After an uneventful period, Austin Matthews took matters into his own hands by opening the scoring eight seconds into the second period. He served a nice fake to Mark Scheifele before beating Hellebuyck with a good shot. Matthews added a second goal a few minutes later.

Mark Giordano completed the scoring in an empty net.

A victory in honor of Ryan Miller

Ryan Miller's No. 30 retirement night ended on a high note in overtime in a 3-2 Buffalo Sabers win over the New York Islanders at KeyBank Center.

After the game , all smiles, the former goalkeeper who played 11 seasons with the Sabers went to celebrate the victory at the center of the ice with the players.

Alone in front of Ilya Sorokin, Dylan Cozens gave the victory to his team , in extra time, after accepting a perfect pass from Rasmus Dahlin.

Victor Olofsson had tied the score midway through the third period by taking advantage of the traffic in front of Sorokin to demystify it.

Alex Tuch had initially tied the score in the second period before seeing the New York formation resume the lead for the second time in the game.

The visitors silenced the fans in the first period thanks to Brock Nelson's 16th of the season. He rushed towards the net and redirected a pass from Anthony Beauvillier to hit the target.

Matt Martin also threaded the needle in the loss.

Boston Bruins goaltender Jeremy Swayman is turned into a wall in a 3-1 win over the New York Rangers at Madison Square Garden.

The 24-year-old keeper made 27 saves. He was heading for a second straight shutout before Ben Harpur managed to beat him at the end of the third period.

Quebecer Patrice Bergeron gave his team a two-goal lead by hitting the target with a good shot that surprised goalkeeper Igor Shesterkin.

Pavel Zacha opened the scoring with less than two minutes remaining in the first period. The visiting forward fired a shot as he turned from the blue line to mystify the opposing goaltender.

Connor Clifton then added some in the third period.

The Bruins continue their momentum by winning an eighth game in their last 10, including three consecutive wins.