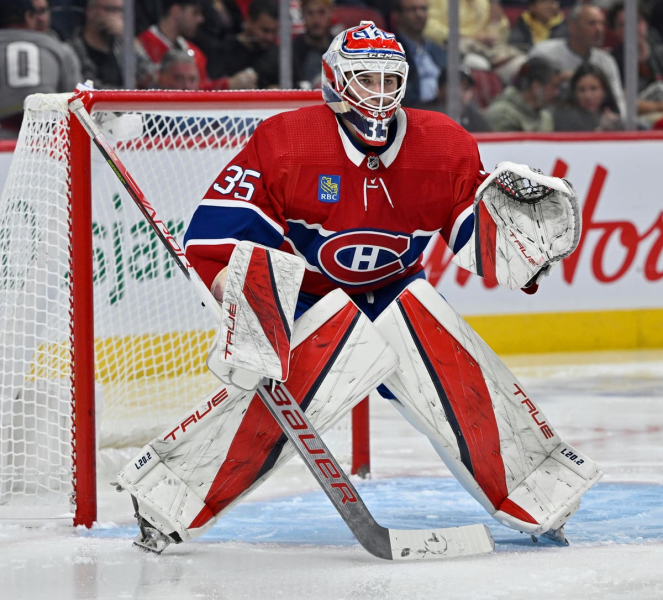 The more Samuel Montembeault adds up the good performances, the more his value increases. Aged 26 and pocketing a salary of $1 million a season until the next one concludes, he could prove an interesting catch for a general manager looking for depth at the position. Except that Kent Hughes does not see it that way.

“Sam is not going anywhere, assured the general manager of the Canadian. We want to keep it.”

Never in his nearly 45-minute tally has Hughes been so sharp. Except maybe when it came time to confirm that his priority was to sign Cole Caufield for several seasons.

So that says a lot about how happy the organization is with regard to the former Blainville-Boisbriand Armada.

“He is going through an excellent sequence. For an NHL goaltender, he's still young. It is difficult to use this small segment to predict its future, but we can see that it has some potential,” explained Hughes.

Free translation: and if the successes he is currently experiencing were the harbinger of a bright future, the Canadiens would be biting their fingers to have traded him, while the succession is rather thin at this position.

The makings of a number one?

At the start of the season, the athlete from Bécancour had shown encouraging signs of a certain progression compared to last year. However, since Jake Allen is on the sidelines (the Canadian announced that he will miss at least another week), Montembeault has reached another level.

Tuesday night, against the Winnipeg Jets, he played his fifth straight game. A fifth evening of work in nine days. A colossal work task even for a goalkeeper accustomed to the rhythm of a number one.

During that streak, he maintained a record of three wins against two losses. But what stands out is the .946 save percentage he posted in those games, in addition to a 2.02 goals-against-average. Games in which, with the exception of Tuesday, his teammates struggled defensively.

We'll see what happens to Allen when he returns from injury and as he approaches the deadline for transactions set on March 3. But can Montembeault aspire to the title of number one goalkeeper?

To this question, Martin St-Louis had preferred to play it safe, Tuesday morning, at the end of his team's morning training, saying that he did not have enough information at hand to decide.

“I didn't know him very well before I came here. But, last year, he solidified his position as an NHL goaltender. This year, he took it a step further. He gave us very good matches. He was very consistent,” he nevertheless took care to point out.

Montembeault would not be the first goalie in recent NHL history to come out of his shell in his mid-twenties.

Jordan Binnington was about to celebrate his 26th birthday when he played his first full season with the Blues, leading them to the Stanley Cup.

Corey Crawford was the same age as Binnington when he got a regular job with the Blackhawks.

Devan Dubnyk was hatched with the Wild, at 28, after having rolled his bump with the Oilers, the Predators, a short stay in the organization of the Canadian and the Coyotes.

So, nothing is decided yet for Montembeault