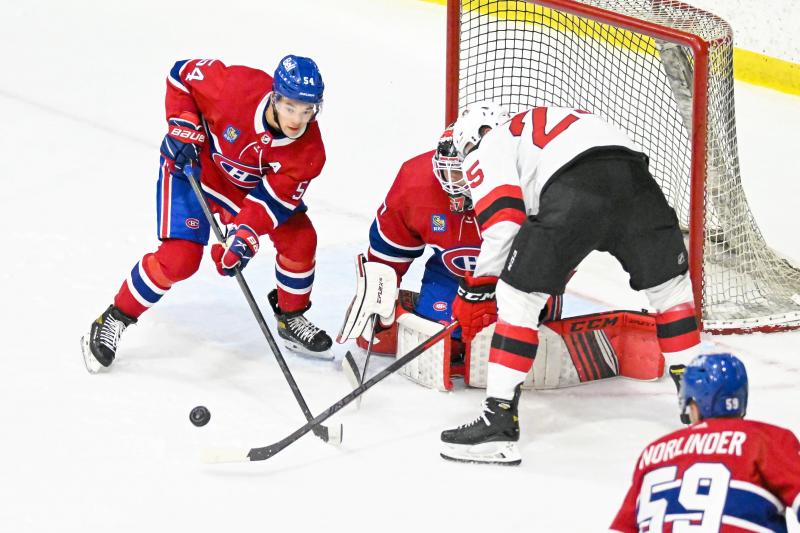 BUFFALO | If the succession to the blue line of the Canadian has long been thin, it is far from being the case now. Four of the nine defensemen taking part in rookie camp could very well start the season in Montreal.

Justin Barron, Jordan Harris and Mattias Norlinder already have NHL experience. To this trio, we must add Kaiden Guhle, who seems to have all the qualities required to take the plunge this fall, and Arber Xhekaj, who has been confusing the cards since he joined the organization on the simple basis of an invitation last year.

“There will definitely be struggles and it's already started,” said Jean-François Houle, who has been leading practices and games since the start of rookie camp. It's already an opportunity to show off in front of the team's general staff, against young people of their age.

If not for an ankle injury that caused him to miss the last three weeks of the season, Barron would currently be the member of the squad with the most experience with the Habs.

“I felt good at the time of my injury. I was happy to have responsibilities and to play on the massive attack, launched the back acquired in return from Artturi Lehkonen. It gave me confidence. It proved to me that I can play in this league. »

But nothing is guaranteed for the 20-year-old defender, who knows that the competition will be fierce.

“Yes, there has positions open, but there are a lot of good young defenders in this organization, ”he admitted.

One wonders if Barron's direct competitor will not be Harris . Although left-handed, Harris was used on the right in the first game of this rookie tournament.

“I haven't taken any time out this summer. We had a good group training together in Massachusetts. I want to break through the formation from the start. That was the goal behind all this work, ”said the man who played 10 games with the Habs at the end of the last campaign.

“I learned a lot at the end of the season,” Harris continued. The NHL is different from college. This is a game for mature men. You have to know how to use your strengths. Big guys play big, skaters skate, skilled players use their skills. »

Shuttle to be expected

Whatever Joel Edmundson thinks, the reconstruction phase of the Canadiens is not yet over. And as is done when development takes precedence over immediate success, young defender candidates could very well shuttle between Montreal and Laval, just to polish a few aspects of their game during the season.

“I understand the intention behind this decision. You can play more minutes in the American League,” Barron mentioned.

However, the 20-year-old defenseman doesn't seem keen on the idea.

“My goal is to stay all season in Montreal. Of course, I don't make the decision. However, I will do everything I can during the main camp to prove that I can play for this team,” he said.

For his part, Harris seemed a little more moderate.

“I will try to control what I can control. I have confidence in what I can do. I want to make the team, but being sent back to Laval would not necessarily be a step back.

It should be remembered that, unlike Barron, who played half a season in the American League, Harris left the university ranks at the end of last March.

In addition, Norlinder has assured that, unlike last year, he will remain in North America for the entire season. Whether in Montreal or Laval.