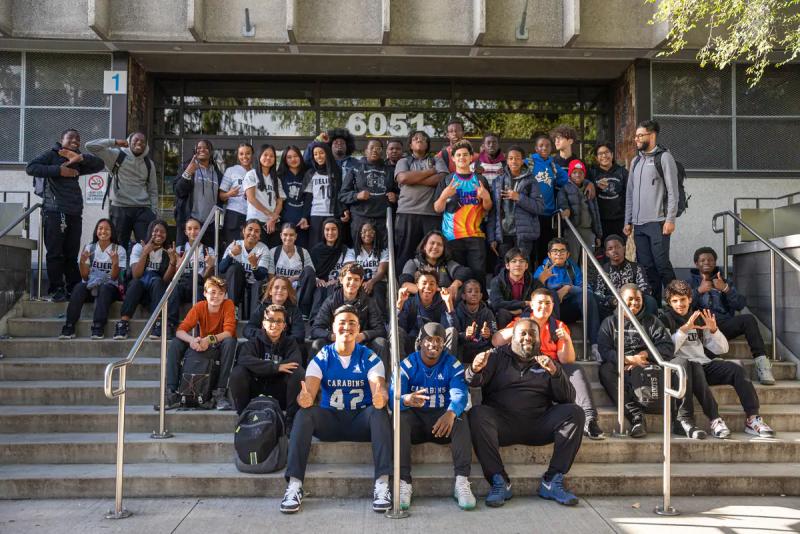 Set a positive example, that's what two Carabins players from the University of Montreal did when they met young people from Henri-Bourassa high school in Montreal North.&nbsp ;

Last Friday, Edouardo-Benjamin Sreng-Flores and Lyshawn Dubois, both from the neighborhood, presented their backgrounds to athletes who make up the men's cadet football team and the youth women's “flag football” formation of the Béliers.

“I loved my experience,” said Dubois, after stepping down from the auditorium stage. The young people were welcoming and they asked me good questions. It motivates me to do more. When I was young, no one ever did that for me. […] I feel privileged to be able to develop a connection with them.”

The ball carrier said that he hadn't always been serious and that he had bad company during his adolescence. Asked by a student about the reasons that led him to take charge, he explained that the birth of his little brother had changed his way of seeing life. Dubois realized that he must be a good father figure for this one, since their father was no longer in this world.

The 21-year-old's story particularly resonated with Kerby. Every day when the bell announces the end of school, the 13-year-old rushes across the street to pick up his little brother from primary school. He then brings it back with him so he can participate in his football training. This ritual could also be observed during the presentation of the Carabins players, when Kerby disappeared for a few minutes and then returned with a child.

“I see their visit as an honor, because it gives me some importance. They could have chosen other schools, but they came to ours,” said the Aries wide receiver, who already has to deal with adult responsibilities despite his young age.

“ Knowing that these guys are from the same area as me, it tells me that I too can succeed,” added Kerby.

The initiative for this meeting came jointly from the Carabins defensive line coach, Gladymir Charmant, and the sports manager at Henri-Bourassa high school, Mohammed Ayman Nechchad.

“He there is a difficult reality in our environment and in our neighbourhood. We want our young people to be in contact with role models who look like them and who know the same reality as them,” said the second.

“Representation is important. Seeing two guys who come from the same neighborhood as them can be inspiring, added Charmant. They have before them two student-athletes who are going to obtain baccalaureates and who have used football as a vehicle to achieve a goal.

According to the statements of the few young people interviewed after the conference, the two adults hit the nail on the head.

“It's inspiring to know that there are opportunities. If they managed to do it, why couldn't I do it?” said Aïcha, 16, with a smile.