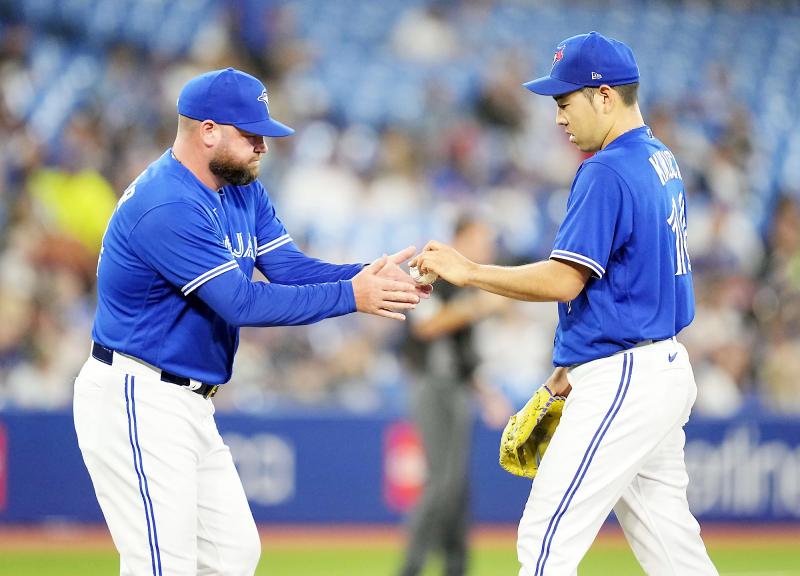 Dissatisfied with the team's performance during a strenuous trip to the West Coast in July, Blue Jays management put the dunce cap on their manager, Charlie Montoyo.

With a record of 46 wins and 42 loss and the tumble in the standings, Montoyo was shown the way out. However, we cannot attribute all the blame to him. The small Blue Jays general was simply abandoned by his general manager, Ross Atkins, who did not provide him with the necessary ammunition.

The team guides have been entrusted on an interim basis to John Schneider. Each time there is a change at the helm of a team, we observe as if by miracle a renewal of life. The Jays went on an 8-1 streak, one of the best in major league baseball after the appointment of a new coach.

During this period, the Blue Jays were unrecognizable. Goal thefts were numerous, the short and strike was a strategy used and the smiles returned to the dugout.

But as the saying goes, “drive out the natural and it comes galloping back”. After the loss to the Orioles on Monday night, Toronto is posting a lackluster 15-11 record since the arrival of their new manager.

Yes, Atkins made some acquisitions. He got his hands on pitchers Anthony Bass, Zach Pop and Mitch White. But a team cannot aspire to great honors with such gunners. On offense, there is the arrival of the versatile Whit Merrifield. Then the Jays gave Jackie Bradley Jr. a uniform. Despite these acquisitions, the record is not much better with a record of 4-8.

Obviously, whether with Montoyo or Schneider, nothing changes in the Queen City.

The debate for the most valuable player in the American League continues. Some pundits have already checked off the name of Los Angeles Angels wonder Shohei Ohtani on their ballot. Other insiders, especially in the East, have eyes only for the hulking and intimidating Aaron Judge for the Yankees.

Since hitting 117  innings pitched, the Japanese pitcher is eligible to be among the leaders in major league baseball. His 165 strikeouts on three strikes put him in a tie for fifth, his 2.69 ERA is 11th best in baseball and sixth in the American.

< p>At bat, the 28-year-old is nothing short of phenomenal. He ranks sixth with 28 home runs in the American League. His brilliance both on the mound and at bat ranks him among the best players in major league baseball. In the same mold as the legendary and immortal Babe Ruth, who shone on the mound and demolished opposing pitchers on strike. Without hesitation, I consider him the best player I have seen in action without necessarily being the best hitter or pitcher of all time.

The power of “&nbsp ;Judge”

In the Big Apple, there is Aaron Judge. A true Bronx Bomber with 48 guns and 100 RBI. It symbolizes excellence in the striped Yankees uniform.

His home run production is compared to Roger Maris (61) and Babe Ruth (60) in the same season. The three patrolled right field and took advantage of the close fence in that corner of Yankee Stadium to get the ball out of bounds.

The Score To Beat

The “Judge” recently said Barry Bonds' 73 home runs in a season in 2001 was the mark to beat. I'm sure it would especially make him feel good to eclipse the brands of Roger Maris and Babe Ruth in a single campaign in the first place.

Ask yourself: Ohtani or Judge?< /p>

Will decision makers still favor a player's individual record instead of the impact he has within his formation? Individually, no one can beat Shohei Ohtani, even if the Angels don't make the playoffs.

The Yankees, without Aaron Judge, wouldn't make the playoffs.

Which is your choice?