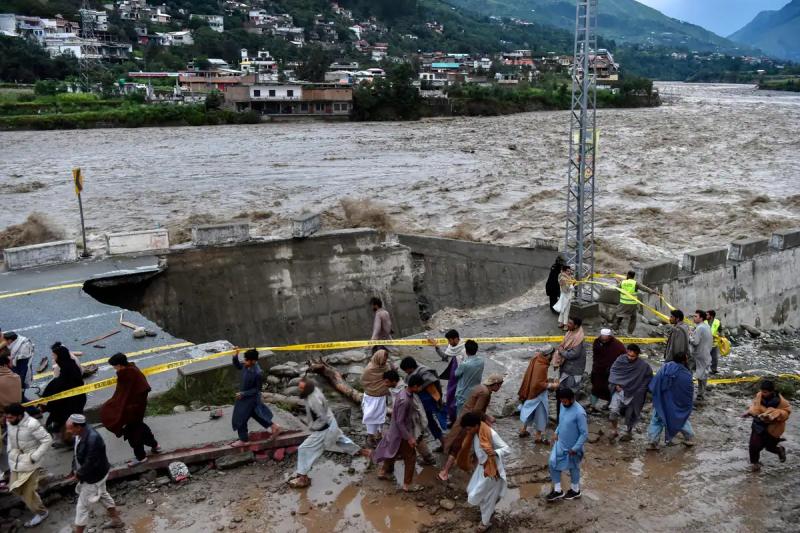 The south of Pakistan, particularly affected by the floods, was preparing on Sunday for a new deluge caused by the flooding of the rivers, the human toll rising to more than 1,000 dead in the whole country.

Feeded by dozens of mountain rivers and streams that burst their banks following record rains and melting glaciers, the Indus, a river that crosses the province of Sindh in the south of the country, stop growing.

The gates were opened to deal with a flow of more than 600,000 m3 per second, said the manager of the major dam that regulates the flow of the river, near the city of Sukkur, in the province of Sindh, where some 500,000 people live there.

Authorities have warned that torrents of water are expected to reach this southern province in the coming days, worsening the hardships of millions of people already affected by the floods.

According to the latest report from the National Disaster Management Authority (NDMA ) published on Sunday, 1,033 people have been killed by the torrential rains, including 119 in the past 24 hours.

More than 33 million people – one in seven Pakistanis – have been affected by the storms and nearly one million homes have been destroyed or severely damaged, according to the government.

In Sindh province, tens of thousands of rural residents have taken refuge on elevated roads and railway lines. Near Sukkur, tents were erected for two kilometers to accommodate the victims who continued to arrive by boat, laden with wooden beds and dishes, alone although they were able to save.

“ The water started to rise in the river since yesterday, flooding all the villages and forcing us to flee,” Wakeel Ahmed, a 22-year-old worker, told AFP.

In northern Pakistan, thousands of people living near flooded rivers were ordered to evacuate their homes on Saturday. However, helicopters and rescuers continued to shelter latecomers on Sunday.

“We had to rescue children and women,” explained from the Swatt Valley a rescuer, Umar Rafiq, to ​​AFP.

In this tourist destination popular for its rugged mountains, many rivers burst their banks, demolishing dozens of buildings in their path, including a 150-room hotel that collapsed in a raging torrent.

Already hard hit by the 2010 floods, guesthouse owner Nasir Khan said he had lost everything. “The part of the building that was spared 12 years ago was swallowed up by the waters,” he told AFP.

This bad weather is comparable to that of 2010, a year in which 2,000 people were killed and almost a fifth of the country was submerged by the monsoon rains which occur between June and September each year, according to the authorities.

On Friday, the government declared a state of emergency and mobilized the army to deal with this “catastrophe of a rare magnitude”, in the words of the Minister of Climate Change , Sherry Rehman.

The country is particularly vulnerable to climate change. It is in eighth position among the countries most at risk from extreme weather events, according to a study by the NGO Germanwatch.

However, the inhabitants also have their share of responsibility. Corruption and poorly planned urban planning have led to the construction of thousands of buildings in flood-prone areas.

The floods come at the worst time for Pakistan, whose economy is collapsing and which has been experiencing a deep political crisis since the ousting of Prime Minister Imran Khan in April following a vote of no confidence in the National Assembly.

While the capital Islamabad and the neighboring city of more than 2 million inhabitants, Rawalpindi, have escaped the worst, the first consequences are already being felt: “supplies are very limited”, underlines Muhammad Ismail, a fruit and vegetable merchant in Rawalpindi.

“ Tomatoes, peas, onions and other vegetables are not available due to flooding,” he told AFP, adding that prices had also skyrocketed.