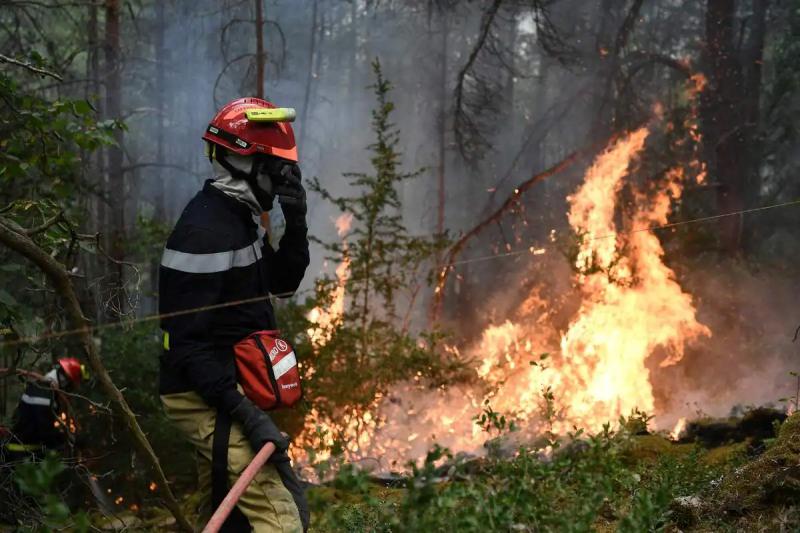 More than 3000 people, inhabitants of villages in the south of France, in the Aveyron, and holidaymakers, were evacuated on Tuesday in the face of the progression of a fire that ravaged at least 700 hectares of vegetation, without causing injury.

In the south of France, the fire that started at the end of the day on Monday from Massegros, in the department of Lozère, and started by an agricultural machine, then spread in the direction of Aveyron, to the village of Mostuéjouls, noted an AFP correspondent.

Tuesday at the end of the morning, the fire fanned by the wind and the drought was no longer progressing. Firefighters lit “tactical fires” to preemptively burn vegetation to halt the advance of the fire.

The authorities have ordered the evacuation of the entire perched village of Mostuéjouls, in the Gorges du Tarn in the heart of the Cévennes National Park, not far from the coniferous forest in the grip of flames.

The evacuees as a preventive measure were directed to village halls and schools in neighboring municipalities.

“The flames were a few hundred meters away, the gendarmes and the firefighters came to tell us to evacuate, we all had to leave in the middle of the night”, testifies Gabin Castro, manager of guest rooms, worried about his accommodation, tree houses.

“We are a few kilometers from the fire, but we evacuated because of the toxic fumes”, declared for his part, to AFP, the manager of the campsite of the inn Le terroir in Mostuéjouls, Nicolas Bouviala, of which 200 customers have been sheltered as a preventive measure.

“The prefecture called and said: + We must start evacuating the campsite slowly +. Half an hour later there was no one left”, he explained.

The fire started because of an agricultural machine whose metallic element scraped the very hot tar from the road, causing sparks. In a context of severe drought, part of a departmental road caught fire, according to firefighters.

The farmer who was driving the tractor called the emergency services himself, before using the water from its cistern to fight the flames. He also contacted several farmers who came to lend him a hand.

Water bomber planes, already mobilized on Monday, resumed their rotations around 07:00 (05:00 local time), according to witnesses.

More than 600 firefighters from several departments are on site, according to the local prefecture.

With already more than 47,000 hectares burned since the beginning of the year, France has already experienced July a record number of areas burned, according to the European Forest Fire Information System (EFFIS), which has kept comparable statistics since 2006.