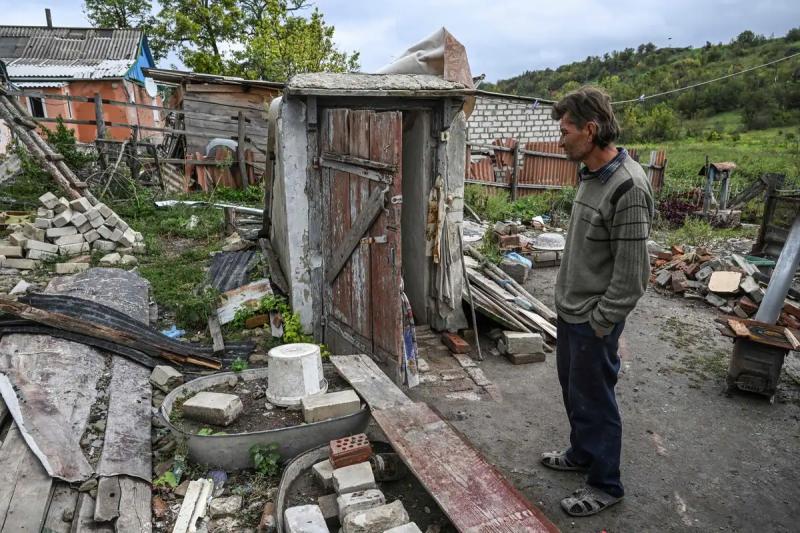 The Russian army on Tuesday announced “massive strikes” on all fronts in response to the dazzling counter-offensive by Ukrainian troops, which the Kremlin accuses of abuses in the recaptured areas, while Kyiv blames “up to 200 war crimes a day” to Russian soldiers.

Russian shelling has so far left eight dead and 19 injured in 24 hours among the population of the Kharkiv (northeast) and Donetsk (east) regions, said the Ukrainian Presidency.

“Ukraine registers up to 200 war crimes committed daily by the Russians” on its soil, the army general staff also assured, adding that “more than 70,000 km2 in ten Ukrainian regions have been undermined” by the occupiers.

For its part, Russia has claimed that the Ukrainian military has been carrying out harsh reprisals against civilians in the places they have taken over in recent days. < /p>

“According to our information, there are many punitive actions against the inhabitants of the Kharkiv region, people are tortured, mistreated,” said Kremlin spokesman Dmitry Peskov, adding: “it's revolting”.

“The air, ballistic and Russian artillery are carrying out massive strikes against Ukrainian Armed Forces units in all operational areas,” the Russian Defense Ministry stressed on Tuesday.

He referred in particular to shelling near Sloviansk, Konstantinivka and Bakhmout in eastern Ukraine, as well as in the southern regions of Mykolaiv and Zaporizhya and in that of Kharkiv, from where Russian soldiers have almost completely withdrawn in the face of Ukrainian advances.

The Russian offensive launched on February 24 will continue “until the objectives are achieved”, the Kremlin had hammered the day before, according to which there are currently “no prospects for negotiations” between the two belligerents.< /p>

Ukraine on Monday reported new military successes, saying it had reached the Russian border and restored control over the equivalent of seven times the area of ​​Kyiv in a month.

“The liberation of the localities occupied by the Russian invaders continues in the regions of Kharkiv and Donetsk”, the Ukrainian army said on Tuesday.

< p>“They killed my brother and my sister-in-law”

In the village of Bogoroditchne, formerly on the front line not far from Donetsk and which the Russians evacuated a few days ago, practically every house bears the traces of intense fighting, noted an AFP journalist.

Mykola Gonchar, 58, and her mother Nina Gonchar, 92, stayed there anyway.

“The Russians came, they killed my brother and my sister-in-law”, tells AFP this man in front of his house, relatively spared by the artillery and bullet fire which ravaged this locality of 750 inhabitants before the war.

He buried the bodies himself.

The Ukrainian army had first announced a counter-offensive in the south, before carrying out during the week a lightning breakthrough in the northeast.

In total, “since the beginning of September, our soldiers have already liberated 6,000 km2 of Ukrainian territory in the east and south”, a figure twice that officially provided 24 hours earlier, the President said on Monday evening. Ukrainian Volodymyr Zelensky.

“And we keep moving forward,” he concluded.

The Russians “fail to reinforce the new front line after the Ukrainian gains in eastern Kharkiv Oblast and are fleeing the area in large numbers or redeploying on other axes”, noted Tuesday the Institute for the Study of War (ISW), a think tank based in the United States.

“Images circulating on social media show lines of cars stretching for miles near Stchastia and Stanyssia Luganska”, on the edge of the “People's Republic of Lugansk”, unilaterally proclaimed in 2014 by pro-Russian separatists (like that of Donetsk), and near the Russian border.

“It is too early to say exactly where all this will lead us,” however tempered the head of American diplomacy, Antony Blinken.

At the international level, Finnish Prime Minister Sanna Marin called on Tuesday for the unity of the European Union and for new sanctions against Russia in the face of its energy “blackmail”.

European energy ministers will meet in this regard on September 30 to examine the emergency measures proposed by the Commission in order to stem the surge in gas and electricity prices caused by the war in Ukraine.

The head of diplomacy of the European Union Josep Borrell will also propose to the Member States funding for the supply of armaments to Ukraine.

And pressure is mounting on German Chancellor Olaf Scholz, both in Kyiv and within his own government coalition, to deliver battle tanks capable of completing the successes of the Ukrainian counter-offensive.