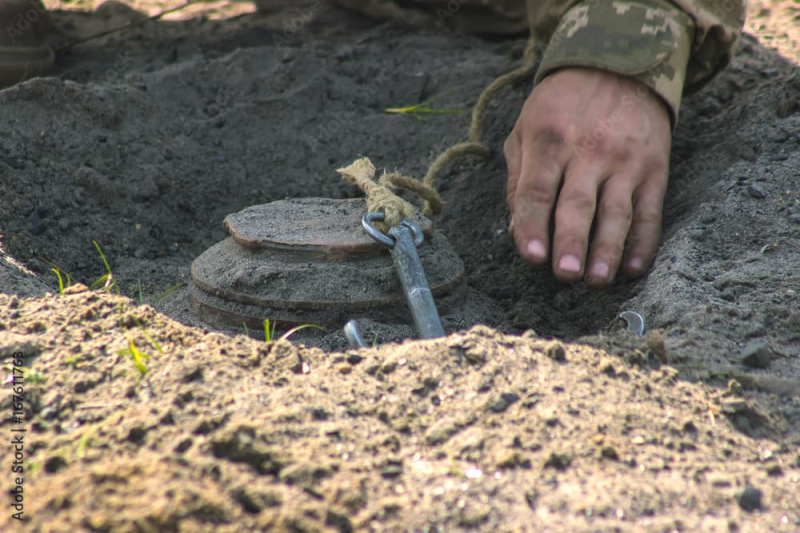 Russia has used at least seven types of fragmentation and blast-effect antipersonnel mines since its invasion of Ukraine on February 24, reveals the Landmine Monitor 2022 report released Thursday.

“This is the first time that a country that is a signatory to the Mine Ban Treaty has faced the use of mines on its territory by another country,” explained Mary Wareham, a member of the Landmine Monitor research team, at a press conference.

“This is a major setback for the treaty on anti-personnel mines,” added the expert, also a member of the NGO Human Rights Watch.

The use by Russia – a country which has the world's largest stockpile of anti-personnel mines (26.5 million) – of this type of weapon in Ukraine has been strongly condemned by various countries.

According to the report, which measures the implementation of the 1997 Anti-Personnel Mine Ban Convention (or Ottawa Treaty), six of the types of mines used by Russian forces in Ukraine are fragmentation (MOB, MON- 50, MON-100, OZM-72, POM-2/POM-2R and POM-3). Russia also uses blast mines (PMN-4). All were produced by Russia or the USSR, according to the report.

The number of civilian casualties from mines and other explosive remnants of war recorded in Ukraine during the first nine months of the year (277) is almost five times higher than the number of victims recorded in 2021 (58).

Ms Wareham also pointed out that HRW sent a letter to Kyiv after Moscow accused Ukrainian forces of using mines.

“Last August we asked about these allegations and their we asked to respond to it,” she said, hoping that Kyiv will do so during the Assembly of States Parties to be held in Geneva next week.

164 states are parties to the Ottawa treaty and one signatory, the Marshall Islands, has yet to ratify it. After a significant reduction in the number of victims following the treaty's entry into force, the number has reached “dramatically” high levels over the past seven years, according to the report.

At least 5,544 people were injured or killed in 2021. Civilians accounted for the majority of recorded casualties, with half being children.

Last year, Syria, a non-signatory to the treaty, recorded the highest number of annual victims (1,227), followed by Afghanistan (1,074), a state party.

The report, which covers the period from mid-2021 to October 2022, highlights that in addition to Russia, the junta in Burma, which is not a party to the treaty, also uses these weapons to fight against rebellion.

Demining efforts around the world are another big challenge.

As in previous years, the majority of mine clearance in 2021 was accomplished by Cambodia and Croatia.

Another concern is the ever-decreasing funding for victim assistance. According to the report, the year 2021 saw the lowest level of funding for this sector since 2016, despite the growing needs and the high number of victims observed in recent years.

To date, 94 countries declared having completed the destruction of their stockpiles, the latest being Sri Lanka in 2021.

Two countries remain in violation of the treaty for not destroying their stockpiles on time: Ukraine and Greece, which possess 3.3 million and more than 343,000 antipersonnel mines, respectively.