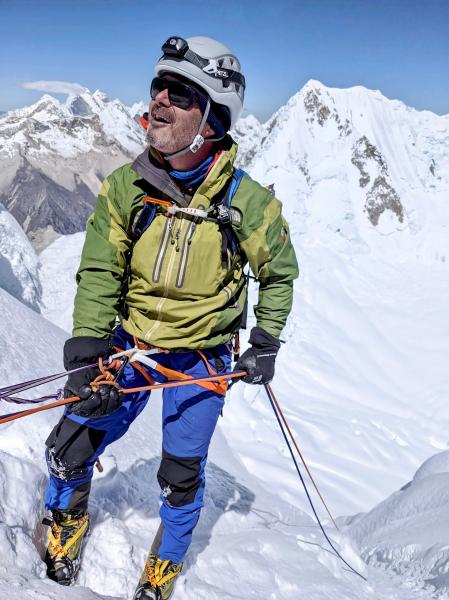 Quebec mountaineer François-Guy Thivierge began the challenge of his life in August 2019: to climb 55 mountains in 55 months to celebrate his 55th birthday. On a regular basis, Le Journal presents a mountain it has climbed as part of this project.

For a good ten years, François-Guy Thivierge had not tackled such a long challenge. For eight days, the mountaineer braved the famous peak of Alpamayo, in Peru, from its height of 5947 m. He emerges from this experience, which is certainly one of the most robust main courses of his great project to climb 55 mountains in 55 months.

“For me, in the 55 challenge, it was in my toughest. The eight-day program made me think of mountains like Aconcagua in Argentina and Mount Denali in Alaska. It requires several days of hiking at altitude, setting up camps, transporting food and a whole organization,” says the mountain dweller from Quebec.

The Alpamayo is recognized not only as the one of the most sublime peaks of the Cordillera Blanca in the Peruvian Andes, but also throughout the world.

The large icy grooves of the Alpamayo, with its summit at 5947 m, offer a striking spectacle.

As early as 1966, the magazine Alpinismus defined the Alpamayo as “the most beautiful mountain in the world”.

When he compiled his list of 55 in 2019, Thivierge, who was looking for challenges as high as they were safe, knew that this Peruvian jewel was waiting for him.

“It was missing from my collection, like someone 'someone who collects hockey cards, but doesn't have a Guy Lafleur card', evokes the eternal adventurer, in one of his colorful analogies.

With his partner Alfred Boivin, Thivierge reached the summit of Alpamayo on July 21, thanks to well-established teamwork.

For this climb, Thivierge chose to join forces with those of Alfred Boivin, who was new to high altitude.

The tandem first had to climb 28 km at the walk in two days, at an altitude of 2900 m at the start, to reach the pass and finally see the object of desire.

“You can't see it from the road because it's in a mountain range. When you see the Alpamayo, both arms fall on you”, Thivierge still salivates.

“Camp 1 is higher than Mont Blanc. You're already starting to feel altitude sickness. My friend lost his appetite for three days. He had to draw on his resources. We continued to climb a glacier with crampons, ice axes and backpacks. »

“The other camp was at 5400m, the same height as Everest base camp. We got there after four days. Around noon, we arrived to see the perfect pyramid, the goddess. Its south face is made up of lava flows, like a large white bridal veil,” says the mountaineer, entrepreneur and lecturer.

The adventurer found himself first in line at 5850 m in the summit corridor, surrounded by cornices and spectacular ice mushrooms.

The duo continued to climb this corridor with cornices transformed by the wind, in a vertical slope of 60 to 70 degrees.

“It is the equivalent of four times the height of the Montmorency falls, at high altitude. For me, it was a dream since my friend Yves Laforest [who had been the first Quebecer to climb Everest in 1991] had climbed this mountain in 1988”, he underlines.

Long before reaching the summit, Thivierge experienced a good scare when the cold played a nasty trick on him.

“I froze my feet like never before. I tried for four hours to move my toes in my boots and nothing happened. I told my friend that I had to stop everything or take off my boots to place my feet on his stomach, under his coat. That's what we did and it thawed after 5 to 10 minutes. The smile returned to my face. The hope of seeing the summit has returned to me,” he says.

After having traversed a last narrow corridor like a closet, the summit offered itself to him as a deliverance.

Each ascent is dedicated to a business partner of Thivierge, and, this time, it is the producer maple sap Maple 3 that helped the mountaineer.

“I arrived at the top with tears in my eyes. The sun warmed my face and the view of the turquoise lakes was spectacular. We are talking about 360 degrees of beauty. I surpassed myself, it's one of the accomplishments of my career,” he raves.

Then there remained the long descent over four other days to complete the grueling journey. In the heart of South America, François-Guy Thivierge rediscovered a bit of his Quebec flair.

“This mountain is one of the highest icefalls in the world. I'm an ice climber and that's why the Alpamayo came looking for me in the gut. »

Region: Cordillera Blanca, in the Andes