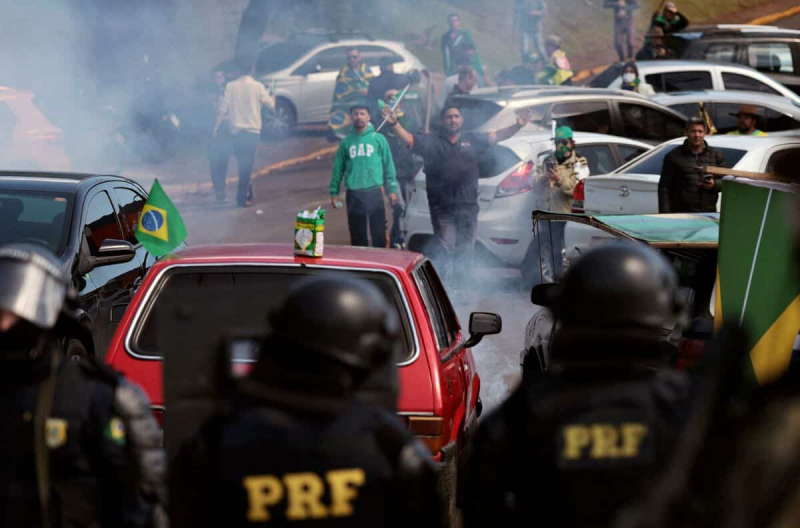 Jair Bolsonaro remained walled in his silence since the announcement on Sunday evening of his narrow defeat (49.1% against 50.9% against Lula), and had still not recognized the victory of his sworn enemy.

Launched the day before, the protest movement on the main roads spread on Tuesday. The Federal Highway Police (PRF) reported 250 blockades, total or partial, in at least 22 of Brazil's 27 states. Monday evening, only a dozen states were concerned.

“Lula no!” was it written on a panel hung above a viaduct in Sao Paulo, the economic capital, where several roads were also blocked, in particular that which connects the megalopolis to Rio de Janeiro, preventing the departure of coaches between the two cities .

Santa Catarina (south), where Jair Bolsonaro won almost 70% of the vote, is the state with the most blocked roads.

“I hope to go home” in Rio. “I was able to pay for a night in a hotel here, but a lot of people had to sleep here at the bus station,” Rosangela Senna, a 62-year-old real estate agent in Sao Paulo, told AFP.

A Supreme Court judge ordered the “immediate unblocking of roads and public thoroughfares,” the institution said in a statement late Monday.

He ordered the PRF to take “all the necessary measures” to clear the roads, under penalty of fining or imprisoning its general manager for “disobedience”.

More than 36 hours after the official results, outgoing President Jair Bolsonaro has still not acknowledged his defeat on the wire, unlike several allies in his government or in Parliament.

Very many heads of Foreign states have since Sunday evening congratulated Luiz Inacio Lula da Silva, the left-wing candidate, for his third term as head of the country, after those from 2003 to 2010.

He will officially take office at January 1, but now a transition of power should take place – if the outgoing government agrees to cooperate.

Brasilia was quiet on Tuesday morning after police restricted vehicle access to Three Powers Square, where the Presidential Palace, the Parliament and the Supreme Court are located, close to the huge esplanade of the Ministries since the evening before. , a traditional gathering place in the capital.

This “preventive” measure was taken “after the announcement of a possible demonstration at this place, on social networks”, had indicated the secretariat of the Public Security of the Federal District of Brasilia .

Calls from bolsonarists to join the roadblocks were increasing on social networks, notably Twitter and Telegram, according to the AFP's digital verification team.

One of them called on the Bolsonarists to a large rally at 3 p.m. on the huge esplanade of the ministries in Brasilia.

“Brazil will not be Venezuela,” said the message on a yellow and green background, like the national flag, beloved by the radical right. He reproduced the text sent to his father by Senator Flavio Bolsonaro on Monday: “Bolsonaro, we are with you no matter what.”

In Sao Paulo, Bolsonarists betting on a continuation of the movement called for Wednesday afternoon at “the greatest mobilization in history” on Paulista Avenue – this same avenue flooded Sunday evening by a tide of hundreds of thousands of Lula sympathizers dressed in red, who had jubilantly celebrated the victory of their champion.

In Sao Paulo, the roads leading to Garulhos International Airport, which has the busiest air traffic in Brazil, were cleared by the police in the morning, after cancellations or delays of several thefts, reported the local press.

The military police were also at the end of the morning clearing certain roads in Sao Paulo, Rio de Janeiro and Minas Gerais, on the order governors of these populous southeastern states.